Home Archives Profile Subscribe Links Rankings
Back to that same old place...
Could you go and run into me...

The gift you gave is gonna last forever...

I know that there are some of you who actually look forward to Snippet Wednesday. And I've kinda left you hangin' the last coupla weeks. Last week it was an unfinished Snippet Wednesday due to Katie's crash. Yesterday, I just plain ran out of time.

So I'm gonna make it up to you with a special edition Snippet Thursday: The Reckoning!

Katie
Tomorrow marks Katie's official final day of student teaching. However, she got her grade for student teaching as well as her portfolio yesterday. As on both! That means she is graduating with a 4.0! I'm ridiculously proud of her! Mah baybee gotz intelluhjints!

Taste
My IT Director at work was in my office for a meeting yesterday when he looked on my cubicle cabinet and saw a promo card for the release of The Flaming Lips new album. This led to a discussion about music. Turns out:

Clearly, my IT Director rawks. 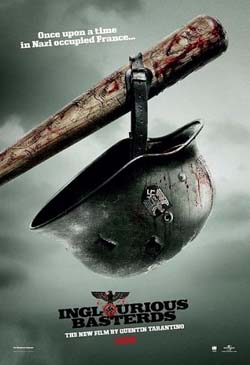 I went to Best Buy yesterday to look into how much copies of The Hangover and Inglourious Basterds were on DVD. I also was curious if they came with digital copies. Both do. But, thanks to Ren's recent warning, I began to read the small print. Expirys were not a concern, thankfully. But compatibility was. Basterds is fine, but Hangover is neither Macintosh nor iPod/iTunes/iPhone compatible. Why in the name of Christ would a distribution company not want their product to work on the top-selling digital player of all time? Sure, I can probably rip and convert it without a problem (I do have Handbrake and iSquint and all those other cool little apps), but just loading the digital copy is so much easier.

Oh, and I alerted some customers and employees to this fact as well. They were dumbfounded by the stupidity of it all.

Blu-Ray
I actually have a Blu-Ray disc. My very first Blu-Ray disc. I don't own a Blu-Ray player, but I have a disc for when that day does come. I don't know how many of you subscribe to e-newsletters from restaurants and whatnot. Well, I do. And I get all kinds of free birthday shit as a result. Usually they amount to free desserts or, if I'm lucky, free entrees.

I got über lucky this year thanks to Disney who offered me a free Blu-Ray disc for my birthday. Say whaaaa? Of course I could only choose from a list of five movies. But it's free. So who cares? I chose Enchanted. Hey, Katie and I enjoyed that movie. And it's got Amy Adams. Can't go wrong with Amy Adams. Both my wife and Sizzle know of my obsession with her very well.

Gift
I think I've finally figured out what I'm going to get for Katie for Christmas. I usually have her gift done by now. This, I believe, is the latest I've waited to buy something. I just want to do a little research first before I actually buy it. There's no way in the name of all that's holy that she'll be expecting this. Not one iota of a chance.

Fox
I had a plan last week to write up a big glowing review of a movie Katie and I went to see, Fantastic Mr. Fox. I had it all pre-written in my head and was sitting down to type when I decided, instead, to read through my subscriptions in Google Reader. This was when I noticed Avitable had done the same thing and pretty much had the exact same opinion of the movie as Katie and I. So, if you'd like to read about a fantastic film, sure to be one of my tops of the year, head over to Av's digs and read up.

Medley
This is simply too cool.

A huge standing "O" to Katie. What an amazing accomplishment!

I dig that video.

I wish the video were longer, as it is too awesome to have ended so soon.

My Blu-Ray of The Hangover arrives today. I had hoped the digital copy would be good. We shall see if it differs from the DVD, though I'm not optimistic.

I keep telling her it's something I never managed and she considers me to be the "book smart" one in the couple.

I had to make up for the last couple o' Wednesdays.

I doubt it too, but let me know. I'm curious.

Wait, people actually watch movies on their iPod/iTunes/iPhones? Woah. I'm so 2000, it's not even funny.

I will watch ones that I've seen already on a bigger screen. Otherwise, no.

I just got IB on Blu Ray on Tuesday and can't wait to watch it again, this time at home. Such a great movie.

Thanks, man. I can't wait to watch Basterds again too.

Maybe it's one of those IT things since I'm in IT and love all those bands.

Inglorious Basterds is top notch on Blu-ray (and digital copy, too). Another great movie by Tarantino.

I've not seen The Hangover yet, but hope it will show up soon from Netflix.

I guess it's possible that IT has an affinity for the Lips and whatnot. A chance to geek out and have it be completely socially acceptable. The Hangover is awesome, BTW.

Congrats on your Blu Ray disc! We have a blu ray player in our PS3, but somehow not having an HD TV made the experience somewhat less than exciting. One of these days though, I will have all the toys... :) I LOVED Inglorious Basterds!!!

By the way, I also nominated you for an award on my blog, because I love reading yours so much. :)
http://beyondalice.wordpress.com/2009/12/23/my-first-award/

Hey thanks! I really do appreciate that and will be sure to pass it on. Oh, and the Blu-Ray disc sadly does me no good without the player. *sniffle*