And you were right there next to me...

Sorry about that. Had that song stuck in my head for a couple days now. On to Snippet Wednesday...

Gift
Less than a month until Katie's birthday. More precisely, only about two and a half weeks. I was really starting to sweat about what to get her. But, yesterday, it all finally fell in place. I know exactly what I'm getting her! Now I just need to buy it. I'm actually kinda stoked! 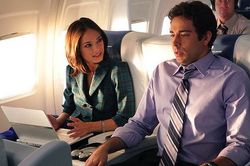 I know that the show Chuck has its detractors and I can understand their complaints, to some degree. But I, for one, love the show and am happy as hell it's back and I thoroughly loved this week's episode ("Chuck vs. First Class") where Chuck goes on his first solo mission on a flight to Paris. Sure, there was still some of the simpering that people hate, but otherwise, he got to kick some serious ass. And the addition of Smallville's Kristen Kreuk as Hannah, Chuck's neighbor on the plane and future love interest was great. She and Zachary Levi look good together and work well off each other. And (only a semi-spoiler... barely) the final scene where the close up of Chuck upon seeing her shows his shock and confusion completely melt away to genuine joy was so well done. I only pray Hannah doesn't wind up as a Ring or Fulcrum agent (if you know, don't tell me). They already used that plot device last year with Jordana Brewster. Please don't pull it again. I just want her to be a normal girl who falls for Chuck and vice versa and they wind up in an awkward relationship simply because he cannot tell her where it is he is going and what he is doing when he disappears from the Buy More. Clearly I'm not the only person who loved this episode as evidenced by this thoroughly exhaustive recap (from whence I blatantly stole the image above).

Lists
While I'm still trying to assess the (dis)value of Twitter lists, I will admit to having made several. Not that they've helped me at all. But I am curious why Twitter coded lists in such a way that it will continue to follow a Twitterer that you are no longer following from your account. Shouldn't they remain sync'd up? Strikes me as weird. Now I have to not only unfollow and block someone, but delete them from any list as well? Wow, takes a lot of steps to let someone know you don't give a damn about them anymore, doesn't it?

Slavery
Another brilliant video from The Onion. I don't know how they continue to do it so well. And it amazes me how easily even the most innocent act can be twisted around and made to sound dirty. Just listen carefully.

Crime Reporter: Man Had Sex With Wife Thousands Of Times Before Killing Her

Well, I'm off to work

I haven't seen Chuck yet so I am ignoring that whole paragraph except...I hope Kristin Kreuk is far less annoying in Chuck than she was in Smallville. I was so glad when she left that show!

I used to love Kristin Kreuk but then after she married Luthor it was too much to have her switch between kicking butt and the 'poor me and Clark' scenarios.

By the end of this episode of Chuck I was liking her again. She better not up up a bad agent, a good agent (more likely) or dead (pretty likely).

I think it's funny that both a Superman and a Lana Lang are on the same show. Who's next?

I have tried several times to tune in and like "Chuck" but end up hating it with the burning passion of a thousand suns every time. Chuck never gives up being a nebbish, whiny bitch no matter how much ass he kicks or how many spy missions he nails... and I just can't stand it. I thought that now Chuck has Matrix-like super kung-fu abilities he would FINALLY stop being a whiny bumbling idiot and GROW UP. But, alas, it wasn't to be. Instead everybody stands around begging for Chuck to "flash" so he'll stop being Chuck and grow a pair. How such a moron ends up with such hot ladies falling in love with him is just beyond me. It's bigger fiction than being electronically implanted with unlimited knowledge and bitchin' martial arts skills.

What kills me is that I LOVE every other character on the show. Unfortunately you can't survive on that alone when it's a show about Chuck and you hate Chuck.

So WHAT are you getting her? You can tell us... whisper it in our bloggy ears... go on!

The thing about Twitter lists is that you don't have to be following anyone on it to have them on your list. In fact you could subscribe to someone else's list that contained NOBODY that you personally followed and see all their updates.

I don't really know what the idea behind them was for the developers at Twitter. Personally I don't have any use for them.

I made Twitter lists. And then did nothing with them. I don't get their purpose.

I've never watched Chuck although I see people talking about it all the time. I wonder if I'm missing out on something good? Not that I really have time to add another show to my watch list ;-)

Oh, and I'm not really sure I follow what the point of Twitter lists are to be honest.

I'm a big Chuck fan, although I'm not sure where I actually am in the whole continuity thing (halfway through season 2 I think).

I'm really in it for Adam baldwin though. Can't get enough of him.

I've been hearing that a lot about her Smallville character. I, however, have never seen the show. Guess that's a good thing. I only know her as the cute girl who I'm told played Lana Lang.

I dunno. I could see it just being a strained relationship because of his missions. Or maybe she winds up as a kidnap victim and then leaves after her rescue.

I watched that video with my husband and we just laughed toooo hard. I need to share that. Thanks for making my day!

Oh The Onion freaking rocks.
I like Chuck. I'm not a rabid fan (meaning I always forget what night it's on and only by chance do I catch it but then I like it), but it's enjoyable. I can think of a LOT worse shows, definitely!
Twitter lists - pffft. I am barely ever even on Twitter, so the lists mean jack to me.


If this week's episode turns out to be a turning point in Chuck's behavior (35% chance, I'd say), that would be a very good thing. Along with that Morgan's character looked to have reached a similar turning point.

I was going to explain the point of Twitter Lists, but Vahid beat me to it. I still think they're mostly a failure, though.

I totally get why you don't dig it. It annoys me to some degree as
well. But I guess my tolerance for it is a bit stronger, perhaps. I
dunno.

Oh yeah, tell her out loud on a blog that she reads. That would work well. ;-)

That does seem kinda counterintuitive, doesn't it?

Yeah, I made them and do nothing with them. I might delete a majority of them.

You could always rent it on DVD. The first two seasons are out.

Yeah, he was the big draw for us coming into the show since he was the only person we actually knew on the cast. And the show continues to be a great place for him to build on his badass persona. This episode that I blogged about had a great side story with him and Morgan. Fan-freakin'-tastic stuff.

Saw that you shared it on Facebook. Glad you enjoyed it. I loved it!

That's what TiVo is for!

The side story with Casey and Morgan was great, wasn't it?

I love Chuck. If they cancel it, I'm declaring war on NBC. I don't know what that means, but yeah.

It would upset me greatly as well. But NBC still airs The Office and 30 Rock, so I won't completely hate them. Just mostly.