When they finally get the word...

I must apologize. I got so caught up in the fact that I went through an earthquake yesterday and the subsequent blogging of it, that I completely forgot it should've been a Snippet Wednesday. Guess I'll be having another Snippet Thursday: The Reckoning (yanno, like the last time I effed it all up?).

Fizzy
I'm going out to lunch with some coworkers today and one of them decided we're going for sushi. I'm not sure if I've mentioned it here before or not, but I used to love sushi. Until, that is, December 2008 when I had some sushi and caught the flu immediately afterward. It wasn't pretty. I don't blame the sushi; I know it had nothing to do with it. But the two events happened so close together that my stomach churns at the thought of sushi. Well, I think I may give it another shot today. I hope it all works out for the better. Pray for my intestinal fortitude, will ya?

Fuzzy
I know I rave about The Onion and their videos a lot around here. About the only thing I can think of that compares to The Onion in terms of humor and relevance is The Muppets. And this latest video, all about my Katie's fave Beaker, just furthers that belief...

Big
I dare say that working out is starting to work a bit for us both. Our chiropractor's office is running a Biggest Loser contest to see who can lose the most weight, based on percent, each month for the first few months of the year. Katie rocked January, even beating the guys, and won a one-hour massage. I didn't do so well in January, but, so far as I can tell in February, I've been losing. The scale at the gym says I'm down ten pounds from what I was a couple weeks ago. This is, of course, relative to the scale's original reading as it's notoriously off in terms of actual weight. From what I've been able to figure, it is about six pounds heavy. Hmmm, I like that. I hope it's true.

Buzzy
So far, I'm liking the new Google Buzz, the social media functionality that's now built into Gmail accounts. I read somewhere how it's being likened to a gateway drug between webmail and full collaborative applications like Google Wave, which I considered to be a complete and epic failure, and I would agree on that comparison. But I doubt it will bring me back to Google Wave. The nice thing about Buzz is that it's incorporated into my Gmail screen so it's all right there. Not another Web site for me to log into. Now, if only they would incorporate Six Apart blogware and Facebook, I would truly be happy.

I'm not entirely sure how it worked out like this, but this post has lead to a hankering to listen to an old album by The Refreshments. Can't figure out why. 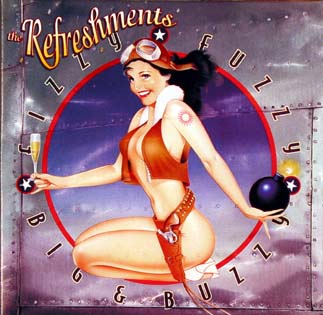 I miss those guys. They put on a good live show.

HA!!!!! How did I miss that video?! LOVE IT! So gonna digg it. And missing a snippet Wednesday because of a little earthquake? Slacker. :)

I don't Twitter. And I only look at Facebook a few times a week. I don't want my email touching the overabundance of status updates. I might kill myself.

Thankfully, I found a way to turn off Google Buzz. I'm terming it the Buzz Kill.

Every time I've tried Sushi, my impression has been nothing more than meh. Maybe I haven't tried the right things? Mind you it took me a while to even try some to begin with. Just never sounded very appealing to me ;-)

Yeah, I turned Buzz off. It annoys me.

I'm actually finding Google Wave very useful, but I think it is only any good in pretty specific circumstances. I'm gurrently trying to organise a group of 36 people and long email chains would just be a disaster.

I hate sushi.
Buzz is good - so far. It just doesn't annoy me or anything, yet. We'll see, I guess!
The Refreshments! Damn! :)

Hey! You can't turn my accusation back around at me!

Was it that "hide" function?

Yeah it did nothing for me today. Not a bit. I think I may be done.

I can see it potentially getting annoying, but not so far.

Given the proper context, I can see it having a purpose, but I think
the rollout bombed spectacularly. Just no aim provided and it didn't
work well or have the functionality they were promising.

You know the Refreshments?? That's a good thing, right?

The Refreshments... don't they do the song from King Of The Hill tv show? Or is it Friends? Can't recall off hand, but the name and the link to a tv show theme ring a very familiar bell.

I had to read your sushi story to my wife. She had the same experience. We went for sushi with some friends a couple years back and the next day, she had the flu and tossed it all. It took her some time to try it again, but it's been pretty 'meh' for her since. For me, sushi rules. Love it. Since my step daughter quit the sushi place she worked at in downtown SLC, I've not had any since, but used to get it half priced all the time. Wasabi, the spicy japanese mayo, soy sauce... now I want sushi.

As for Google Buzz, I like it so far, too. It's got potential and I'm really curious how well it holds up in a few months.

Google Buzz was confusing me at first. I kept thinking I had a ton of email!

Tell your wife I feel her pain. I really have no desire to have it
again. The meh is the truth. It did nothing for me. The taste was
bland and unexciting. Everything tasted the same be it rice, fish,
vegeteable, etc. And considering how much it costs, why bother? As for
Buzz, I'll keep using it unless everyone else dumps it.

I can't say I'm a big fan of them showing up in my inbox but otherwise.

Oh, and yes, King of the Hill. Good call.

Tell your wife I feel her pain. I really have no desire to have it
again. The meh is the truth. It did nothing for me. The taste was
bland and unexciting. Everything tasted the same be it rice, fish,
vegeteable, etc. And considering how much it costs, why bother? As for
Buzz, I'll keep using it unless everyone else dumps it.