I think the world as we know it is coming to an end.

You think I'm joking? Check this shit out...

Earlier this week, Tillikum, an Orca at Sea World Orlando, rose up, snatched its trainer, and drowned her.

A shark-filled tank at a shopping mall in Dubai springs a leak.

A glacier measuring two times the size of Los Angeles has broken off Antarctica and is floating around the ocean threatening to wreak havoc with ocean currents and other weather phenomena.

Earthquakes are running rampant lately, some in areas you wouldn't normally associate with earthquake-like tendencies, and are causing all kinds of damage from both the initial shockwaves, the aftershocks, and tsunamis if they're ocean-based. Another tsunami is now threatening Hawaii.

You wanna know who's to blame? The animals of the world. They're rising up against humans. They're taking back their planet. They're delivering a collective "FUCK YOU" to humans the world over.

The Tillikum and Komodo Dragon stories needs no further explanation. They're just pissed.

The tank leak is because them sharks be hungry and are ramming seams in the glass. They just didn't quite time it right. The leak was discovered before they could break free and make a smorgasbord of the shopping public.

I believe that the glacier broke off because the penguins are sick of being stuck either in zoos or aquariums pretending to be cute on an ice floe that we're responsible for melting. 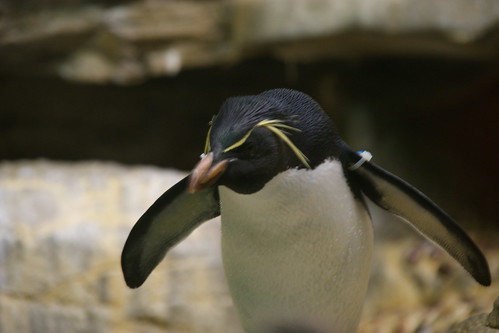 You can't tell me he isn't one angry flightless bird

The earthquakes are clearly the animals who are capable striking fault lines to prove how pissed off they are.

The reign of humans on Earth is over! Give it up!

I hereby declare my allegiance to the non-human animal kingdom. ALL HAIL MY NEW OVERLORDS!!

Are any of you watching Caprica? I've been giving it a shot after finishing the entire Battlestar Galactica series recently, but have been on the fence.

It's not a bad series, I suppose, but it has been really slow and I can't say I've been entirely impressed with some of the casting. I was about to give it up until last night's episode with Daniel's introduction of the Cylon to his company's Board of Directors as well as Tamara and her new, shall we say, antics. These two bits at least added some excitement.

What's your take on the show?

Becca's parents are in Maui. Just thought you guys would want to know. They're heading for high ground and Becca is about as worried as can be. I'd be the same way if the situation was reversed and I'm just glad there has been so much warning. Let's pray nothing actually happens and this is just a good "fire drill".

I hope they're okay.

I, also, bow down to the Animal Kingdom.
I've never even heard of that show.

Well, it is a SyFy show so I wouldn't be upset you didn't hear about it. Not quite the level of saturation of a network show. Bowing down now is the smart thing to do.

Do I have to bow down to ALL animals? I mean, most of them I can bow down to but others, they are just so damned tasty!

Be careful. You may wind up on their menu.

I take you've not heard of Dr. Blowhole? This DVD comes out & the animals, especially marine animals, go "crazy?" Not coincidence.

I can't say I have heard of it. Worth watching?

Wow, I hadn't heard about that Glacier. Mind boggling. Oh, and I haven't watched any of Caprica - which is odd seeing as I was the biggest BSG fan. I dunno, the previews for it never really piqued my curiosity I suppose.

The pilot movie for Caprica and the potential for what it represented is what made me go and rent all the BSG seasons and finally watch them. Didn't want to be completely in the dark.

My wife has always said that the bugs will be the ones to take over. They rule the entire underground. Ants, beetles, worms... all will someday collectively dig until the ground below us collapses. I told her she was nuts until all of the earthquakes started happening. The revolt has begun.

Your overload comment reminds me of Kent Brockman on the Simpsons when Homer releases the ants in space.

I loved that Simpsons episode. But I'm not sure I agree about the bugs. The humpback, grey, and blue whales will flood the underground passages effectively killing off any non-marine lifeforms.