Home Archives Profile Subscribe Links Rankings
Under pressure...
Where they hit the rocky shore out by the lighthouse...

Tell me the tales of war...

For a little while now, I had been tentatively looking forward to Neil Gaiman coming to my old hometown of Naperville as part of the Naperville READS program that they host annually. I say "tentatively" because, while I've read a couple of his books and enjoyed them as well as his Sandman graphic novels, I've had the worst time getting through Good Omens (tried to read it twice now) and I wasn't a fan of the movie adaptation of his fairy tale Coraline.

But, with the signing and reading happening next Tuesday, I was getting a little hyped up.

I went out today and spent a while anguishing over which of his many graphic novels I wanted to buy to have signed (I only own his novels, but had always borrowed his graphic novels from friends or the library). With helpful advice from some of my cool Tweeps including @lesombre, @lynneNaranek, and @MightyHunter, I chose a hardcover copy of Sandman: The Dream Hunters.

Then I went to pick up the ticket for entry to the event.

As the woman handed it to me, she informed me that things had changed and that Gaiman was only going to do a reading and discussion... no signing.

WTF? Seriously? I know this program is all about promoting reading and whatnot, but the cool thing was that they always got great authors to come in and SIGN BOOKS in addition to the reading and discussion.

Besides, Norm wants to take a picture with you. Don't make me Photoshop it. 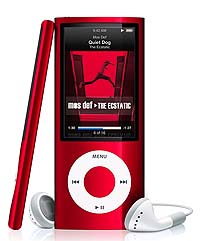 I got her the project RED iPod Nano, in case you wanted to know.

When I gave it to her, I already had it charged up and loaded with music and videos, including South Park, The Simpsons Movie, and Star Trek. Oh, and the UNO game I bought last year.

I gotta admit, it's one cool little device.

The fact that it has that Nike/iPod exercise tracker available plus the built-in radio with song tagging and live pause as well as the pedometer, video camera, built-in speaker, and shake shuffle makes it pretty damn rockin'. I almost want one, but still love the uber-capacity of my 160GB Classic iPod, which is actually about half full.

I haven't legitimately drooled over an iPod in a while.

This is totally drool-worthy!

It's Gaiman's loss not having his photo op with Norm. Not to mention the loss his fans get by not being able to sign a book and have them say "thank you" in person.

So how is the quality of the video camera on the Nano? I have the 4th gen nano, which is minus the camera. I have the 16gb model and love it. Use it daily. It's light, holds songs and videos and the battery seems to do pretty good (about 14 hours on average)

Seriously - no pic with Norm? Can Norm be flipping him the bird in the picture?
That sucks. Signed books are half the reason - most of the reason - anyone goes to a reading. Actually, who just goes for a reading? LAME.
Nice Nano. I love the red. :)

Totally his loss. As for the vidcam, we haven't offloaded one to our computer to see how it looks, but the little samples we've done and watched right on the Nano look and sound really good, not clunky like most undersized point-and-shoot vidcams. I also got Katie the 16GB model. For only $30 more for double the memory? Heck yeah!

Sadly his hands are not quite that articulated. But I could possibly get him mooning. That could work. And yes, the red is really nice.

That sucks. :( But this is Mr Gaiman's 2nd visit to Chicagoland in 2 years, I think, (I vaguely recall him being in Downers Grove just around the time the Graveyard book was coming out), so hopefully he'll come around again, and NOT change things around to deprive the fans!

That's not cool. He has to do signing if he said he was going to!! Not cool at all. Norm really needs to be in the picture with him.

Nano red is perfect!! (I may be a bit biased since my favorite color is red.) I think Apple is now god of all things electronic. Just sayin'.

I was told he was actually at this same bookstore a few years back as well. I just wish he would reconsider and stick around to sign. I don't want to (and likely won't) buy a whole other book that is presigned. I did that with one other author and the book just reeks of insincerity, whereas I've got a dozen or more books signed and personalized by authors. The best ones being Christopher Moore, Kevin Smith, and David Sedaris. They have fun with book signings. Sedaris actually drew pictures in the books he signed for me. I think one of them was a mushroom. Could be wrong. ;-)

I submitted to the godliness that is Apple years ago. Never been a question in my mind. And I will get Norm in a picture if I have to hold Norm in the air from a distance and snap a shot, dammit!

I just realized the only Gaiman book I've read is American Gods. Was very good. Must read the others. Yeah, because that's going to happen - my "to-read" list is huge and really doesn't need anything added to it ;-)

Well, if it helps, Anansi Boys is *related* to American Gods. Not a sequel, per se, just related.

Sigh, I love the Red iPods. My Shuffle is red, but I bought a used Nano and it is yellow. Which kinda kicks, but not as much as red. :)

Funny thing is that Katie was saying yellow was a second choice for her so she could name it "Woodstock." ;-)

That's really too bad that he's not going to do a signing. :(

Everybody I've talked to thinks it sucks that he's not signing.

That iPod is beyond cool. It just struck me as any old iPod before in stores. But once I got it in my grubby hands, it became pretty awesome.

Sigh... I want a husband too... so he can give me great stuff like that as well on my birthday...

Guess I'd better hurry up... birthday is soon :s

Doesn't even need to be a husband. Just a boyfriend with money!

In Gaiman's defense - it's typically not up to the author whether or not you do a signing - it's based on the amount of books the store may need to pre-order to hold a signing. With the book industry in the state that it is, most stores have cut all public outreach budgets and advance sales for the next quarter. Gaiman is likely doing this signing for free, and without the bonus of royalties. (The process of scheduling my own book signings has been a giant learning process, let me tell ya.)

I can see and understand that. However, Anderson's seems to be the one bookstore in eternity that is defying the odds. They remodeled last year and also opened another store two doors down to accommodate all their trinket sales to make more room for books in the original location. They're also renting larger and larger venues for signings since their store isn't big enough for them all. It seems highly improbable in this economy, but, unless they're lying through their teeth or cooking their books, they're doing something right. And they're going to have a large number of pre-signed books available for purchase. Just strikes me that it would be just as simple, but potentially more time consuming, to have these books unsigned and have Gaiman sign them on the spot. He's going to be signing them in advance anyway, so why not? Maybe I'm just being a bit selfish considering how "personal" all my other signings have been in the past. These signings run the gamut from relative unknowns to big names like Anne Rice.