Home Archives Profile Subscribe Links Rankings
Come and sail away with me...
Know what you doing doing to me...

That's what you're hungry for...

This was a good weekend.

On Saturday, we went and hung out with our old game-night crew. We used to get together on a near-monthly basis to eat, drink, and play games. With scheduling difficulties of late, I think this is the first time we've been able to go in nearly a year. It sucks that it's been so long, but we finally did get together.

We had a good night eating, drinking, talking, and, well, not playing games. We call them "game nights," but it seems that, more often than not, we just talk the night away instead of playing anything. And, if we do break out a game, it becomes background to our conversation. But who cares? It was good convo.

The meal was really good too! Graham and Kristy researched and found topping styles from six different cities in the U.S. for hot dogs. It was pretty cool. Of course there was the Chicago style, but we also had, if I recall correctly, Phoenix, Philadelphia, Detroit, New York, and Seattle. All kinds of stuff like marinara, cole slaw, cream cheese, Swiss cheese, sauerkraut, you name it. And they were cut up into small pieces so we could each try a little without getting too stuffed.

Added to that were my mom's baked beans. She shared the recipe with me on Friday and I made them on Saturday while Katie was at work. It was my first time making baked beans ever, and from scratch to boot, but everyone seemed to think they turned out okay, so I was happy.

It was all topped off with homemade vanilla ice cream and little dutch apple tarts. Yeah, nobody left hungry, that's for sure.

On Sunday, we went up to Katie's parents' house because they were tearing out a wall dividing the kitchen and dining room and we wanted to see how it all now looked. It was also the first time since Christmas we'd seen anybody on her side of the family. Sorry, I didn't take pictures, but the wall looked really nice! Not that it's done yet, but still.

Katie's mom took advantage of the opportunity to unload a bunch of stuff in storage in the basement on whomever wanted it. Katie and I were grateful we escaped with a small bag and nothing more since her brother and FSiL walked away with three large bags and another stack of stuff.

But we got a vintage Speak & Spell and Speak & Math out of the affair. Both are in perfect working order as Norman discovered... 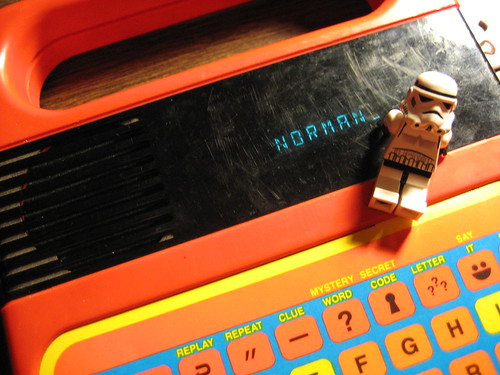 After a long weekend of driving and hanging out with folks, we crashed pretty hard at home. Sadly, despite Norman's best efforts, no work got done on the puzzle at all... 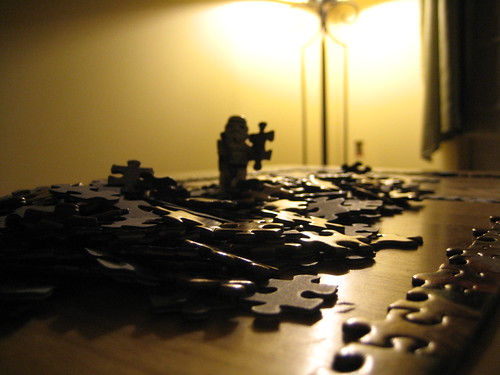 Why do I constantly find myself relating to Wally?

And no bald jokes, okay?

Speak and Spell ... we had one of those, though it by no means meant we were cool. ha.

I still have all kinds of old games in out basement. I don't have a speak and spell but we have a wiz kid and a few of the Mattel hand held led games, Football 2 and Basketball I think and they all still work.

I loved that football game although I had absolutely no idea how to play it. The little tan colored one with the black display, right?

I love Wally! Thanks for signing up for the cruise too by the way, I never said how excited I was that both of you are going to be there. It should be lots o fun for all of us!!

I absolutely love those Norman photos. Such a cool idea.

Yeah, the cruise is gonna be a blast.

I think the football 1 was tan. I have a green one. Pics up soon.

I used to LOVE my Speak & Spell!

I never owned one, but I always played with the one my friend owned.

Did he have a name before? If I would have read this post before your last one, I would have said "and there he is.. Norman"

Can't wait to see what the "these were the droids I was looking for" will look like.

I named him shortly after I decided I was definitely going to use him as my regular photo subject.