Home Archives Profile Subscribe Links Rankings
You are my lover, my life...
Tell me the tales of war...

I'm feeling in kind of an "under" mood for this Snippet Wednesday.

-exposed
I couldn't believe it when Marty sent me this link to a story about one of the members of The Crystal Method who has been chronicling his tour with pictures of his son's Lego Stormtrooper in the different locales he visits. The trooper is even named Norm. In his case, though, it's for "NormTrooper" whereas mine was "Stormin' Norman," but still. Too creepy. I think my Norm needs to get out a little more. 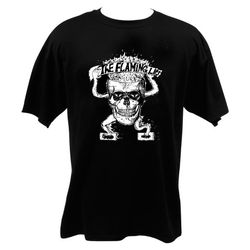 -shirt
I bought a pack of Jockey undershirts a month or so ago without realizing that I normally buy them in tall sizes. Now, after a couple washings each, these things could barely be worn by a toddler and provide full coverage. So, until I have a chance to get back out to a store to buy new ones in the right size (and exchange the one pack I didn't open), I've been wearing T-shirts as undershirts. Last week I used a Blackhawks shirt one day. Yesterday was my Flaming Lips skull shirt from last December's concert. Today is my Ami James skull tattoo shirt. I'm stylin'!

-played
The mysterious gift I bought for Katie for her birthday was a new iPod. As you know, her old iPod died and was outside the warranty period. So I got her an iPod Nano and loaded it with music and video for her trips to the gym. Yes, she has an iPhone, which she has used at the gym, but she's always afraid of dropping it in mid-run (this has happened) and that's a bad thing to do to something that expensive. So she's been languishing for some time with the radio at the gym set to some crappy Top 40 station. Ick. That must change. Humanity dictates it!

Oh, and since I ordered it from Apple, I did get it engraved. But that stays between us. ;-)

-mined
In an attempt to circumvent Netflix, which has had me on hold for the show Glee for a month now, I asked if my library would order it. I received an e-mail yesterday saying, "Unfortunately, because Glee is a network television show, I will not be purchasing it." Huh? What the hell does it being a network show have anything to do with it? And what sense does that argument make when you already stock 24, also a supposed network show?

I would be remiss if I did not recommend the Hanes Comfortsoft undershirts. I usually need tall sizes as well (I am 6'2" with only a 30 inch inseam so it is all torso) but I have not had to get talls with these. They don't seem to shrink up like others I have had.

I thank you for not being remiss. I'm always on the lookout for good stuff. The batch of Jockeys I had before didn't shrink, which is what surprised me. They stayed nice and long, but they were just really old. Like 2-3 years old and were starting to show their wear.

Kind of unrelated, but after a coworker signed up for Netflix and got a movie that week that we have been waiting two months for, I called them and asked them about our theory - especially if they give new movies to new subscribers. They insisted they don't, that it was just "luck" but I called bullshit and told them I better start seeing some of my "long waits" or I was ending our subscription.

We finally got some new movies a few weeks later.

Our plan is to take all of our stuff out of our queue and just leave the "waits" and see what happens.

So.. your shirts shrank, and now Katie gets some tees?! Sweet!
Good job on the birthday gift. :)
GO USA!!!

I LIKE THAT IDEA! Let me know how it goes.

Yep, she has already claimed the undershirts for wearing around the house. And she loved the iPod. She used it this morning at the gym.

Matt wears his tshirts as undershirts a lot. I actually went out and bought him jockey undershirts to wear as undershirts a while back. Of course he looked at me strangely and said, "what are these for? I already have tshirts." At that point I almost proceeded to hit my head on the wall.

I actually don't plan to keep wearing these T-shirts as undershirts because the one thing that always happens to undershirts is that they get ruined by deodorant. Don't want that happening to these good shirts. It's just a temporary holdover until I can get some new ones. And, for the record, she loved the Nano.

I'm so using that phrase today.

It's one of the greatest concert shirts I've ever seen. Although it's less concert shirt and more just band shirt. Not like it has any tour or concert information on it at all. But cool all the same.

By all means! Use away, sis!

When I saw that page, I had to send you the link. It was too much not to let you know of the plagiarism of LEGO Stormtrooper photo ops going on out there.

How funny you should mention the Jockey undershirts. My wife got me a pack of them for Christmas and after a few washings, they are not fit for a toddler. So it seems Jockey is shorting us (ha ha.. couldn't resist that one). JC Penney sells a brand called Stafford. These have been through dozens of washings and haven't shrank any. Highly recommended. For top of the line undershirts though, Nordstrom has their own brand that tops them all. Perfect.

As for the undershirts, I'm only afraid of how much they would go for with the name "Nordstroms" on them. Are they really bad in price?

The Nordstrom branded crew neck t-shirts are $27.50 for 3. A bit pricey, but they are soft, long lasting and more importantly, have never shrunk in dozens of washings. The Stafford brand from JC Penney is a more reasonable option.

I use undershirts often enough and they've saved the lives of enough dress shirts, sweaters, and polos that I can justify that cost pretty easily. Thanks!