Where they hit the rocky shore out by the lighthouse...

On Saturday, I went with my mom and her photography club up to southeast Wisconsin to take pictures of lighthouses along Lake Michigan.

Despite being a dreadfully dreary day, it was a lot of fun. Got some pretty cool photos that you can see below.

I also was given the opportunity to make Norman relive his days assigned to the Imperial Hoth attack force. He didn't much like it. Can't say I blame him. For the record, the red thing in his hand is a Lego coffee mug. Hey, gotta keep warm when the environs don't naturally allow for it, right? 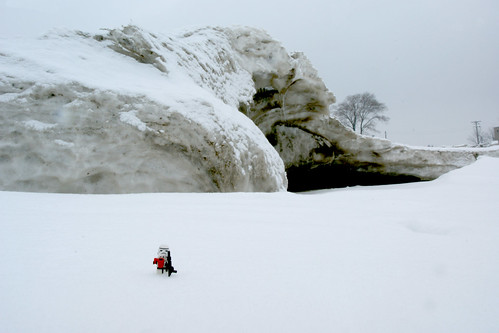 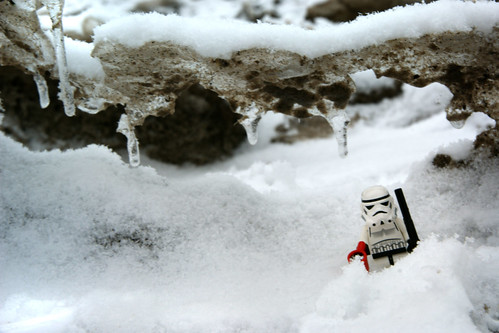 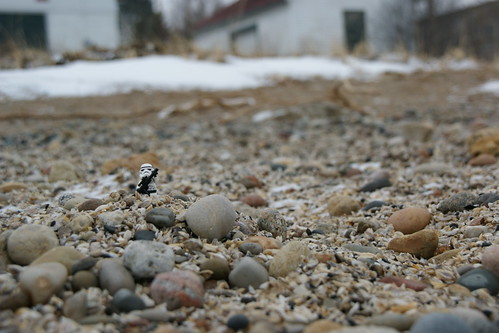 He also got to play outside the Lego Store in the Streets of Woodfield in Schaumburg, though. So that was cool. 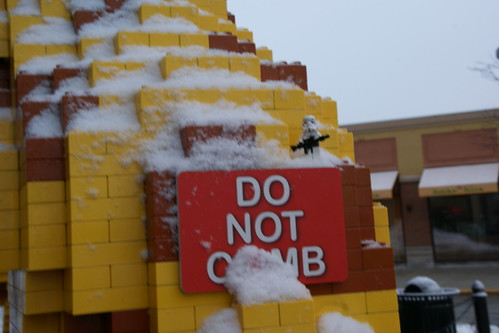 Yeah, he may be an Imperial, but he's a rebel at heart.

But we did come up with the idea to create a squad of Norman clones. The purpose of this clone force is to spread his reach around the world. So, should any of you out there who are going on a vacation in the future be interested in having a Norman clone to feature in some photos, let me know well enough in advance so I can get one sent your way. Then, if you already have a Flickr account, you can share the photo with the group I'm going to create. If you do not have a Flickr account, send the photo(s) my way and I'll upload to my own account with credit given to you for taking it, of course.

Yanno, it just figures that an earthquake centered 20 miles from where I live would wake me up.

However, when the hanging cable and mounting bracket of a 20-pound wood poster frame on the staircase all of 10 feet outside our bedroom tears out and the frame falls into a trinket shelf sending several wooden blocks flying onto the tiles below and the frame scrapes along the wall until wedging itself into our railing, do I wake up? Hell no.

I slept right through it and didn't discover it until the next morning.

I'll see if we have a Normand and see if there is room for him on my travels to Florida March 7. (He may not have guns.)

Damn. Wish we were going on vacation somewhere soon. Especially since it will be very hard to get away in about 7 months or so.

If I recall, there is a shared love of Legos on your part so you may indeed have a Norman sitting around. Let me know.

Loving the pictures!!
Why vacation for Norman? I mean, I live in a different city, right?
Man. Picky Kapgar. I want a Norman! :)

Would that be for the obvious reason?

I have no problem with a staycation. Still a new place for him and his
clones to see.

Yes, Yes it would. :)
Funny to picture me as a father huh?

Thanks! We definitely should plan on getting together soon since I have a designated driver until October lol

I want to be in on the Norman squad!

One Stormy Sizzle, comin' up!

I love your Norman pics. Have I mentioned that? :)

Hmmm would a Norm clone be interested in getting his pic taken in Malaysia, Switzerland and perhaps Italy? :D

He shall spare you for your loyalty.

Ummmm... YES! Address, please! He'll be on the next Imperial Greyhound!

New to this Norman thing (cuz, y'know, I'm new to reading blogs again). But I'd like one. Thankfully, I saw this before my travel months.

Thanks, man! Glad to have you back in the fold. I just need a mailing address.

Since I am now the proud owner of a Norman clone (name forthcoming), I will for sure be posting Flickr pics and sharing them with you (as well as putting him in a few Snowy Sunday episodes, to help me kick start making videos again)

Yeah, where the heck is Clay??? He's not feeling the love!

*hides head in shame* I'm been bad this season for Snowy Sunday. Honestly though, I'm working on getting more episodes here soon. Clay is will be there... along with his friend, the Norman clone.

You'd better hurry. I hear the Clays of the world are rising up in retaliation.

fuck yeah, i'd like to be in. i leave for alabama on the high holy day (st. patrick's day), then will head to some exotic florida white sand beach the next day. me thinks norman (or a norman clone) could get into PLENTY of trouble with me. heehee

Do you need one sent to you or do you have one readily available? Let me know.