Wow. Didn't realize it had been so long since I blogged. My bad. But I'm back in time for Snippet Wednesday, so that's good, right?

League
Major League? A League of Their Own? 20,000 Leagues Under the Sea? No. She's Out of My League, the new Jay Baruchel flick. Katie and I just saw it and it was cool. Surprisingly cool. Highly enjoyably cool. Basically, it's the story of a guy who, according to his friends, rates a 5 on a 10 scale (Baruchel) who, through an act of courtesy and professionalism, scores a date with a 10 (Alice Eve). The rest of the movie is him trying to come to terms with why she would possibly want to be with him while his friends and family keep giving him a mixed bag of advice. I think the best thing about this was that there was very good chemistry between Baruchel and Eve that gave a great air of legitimacy to their on-screen relationship. Plus, his friends (Mike Vogel, T.J. Miller, and Nate Torrance) were hilarious.

Battery
I really wish someone would create a car battery that never dies. Is that really so hard? Can someone get on that so we don't have a situation where Katie's car sits dead in a parking lot again? That would be swell. Thanks!

Pelicans
On Sunday, Katie and I went with my parents to see some pelicans that had temporarily stopped in mid migration at a nearby pond. I haven't posted the photos yet, but, while there, I took a series of 55 photos of them in flight. Instead of just trashing a majority of them, I strung them together as a pseudo stop-motion film. Kinda cool, albeit short. So enjoy!

Pelicans in Flight from Kevin Apgar on Vimeo.

Shorts
I'm still in shock that it's early April and I was able to wear shorts yesterday. No, not to work, but afterwards. It was pretty damn nice. I gotta do this more often!

Lust
I know lust is one of the seven deadly sins, but I cannot help it with these two T-shirts from Found Item Clothing. Damn them and their Twitter account letting me know about this coolness! (They actually found me on Twitter; I'm assuming because of past posts about my Real Genius gear that Katie bought me from their store). 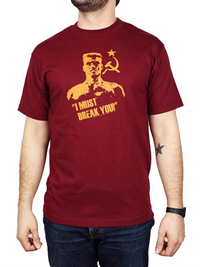 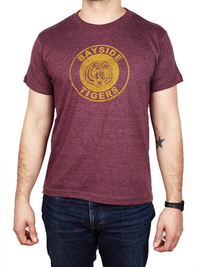 Must have. Too cool for words.

Apr 3
I know it's a day early, but I wanted to make sure I got these good wishes out to all of you when you might actually see them. So, have a great Dead Bunny Day! Seriously, though, have a great...
Next Post

Static in my attic from channel Z...

Apr 9
It took four months of dicking around with Comcast, but we finally have two active tuners on our bedroom TV for multiple simultaneous recording capability. Well, sort of... Back in December, we got our new TV and TiVo up in...

Car batteries do need to made to live forever. We'd also save the earth so much waste if we didn't have to keep throwing them away!

AWESOME film!! You made it from stringing pictures together? That's just too fracking awesome.

You just gave me an idea for Matt's birthday present with the t-shirts. :)

I loved the film! (Or whatever!)
Why the hell does her battery keep dying?

Nicely done on the film. I am working on a Herman film. Still waiting on a re-write of the script and to find a director but soon. Not stop action though.Blinded 47 people this past weekend myself wearing shorts in public. It was fun.

Yup. Just imported the photos into my editor and placed them like snippets of film. I only wish it was longer. Let me know which ones you get for Matt. I always love seeing people with unique shirts.

Thanks! Actually, this is the first time we've replaced her battery in 10 years of ownership on this car. My truck battery has been swapped a couple times, though.

I totally love that shirt. So long as I don't have to wear the short shorts and Screech's headband with it, I'm cool!

Yeah, I can't say that my legs were all that well tanned either. Let me know when your expansive crew are all hired. ;-)

Oh, that Drago t-shirt is full of win. Love it. Oh, and we've been able to wear shorts since Christmas here in Phoenix. Just sayin' ;-)

Now that's just mean. For that, I vill break you.

Kudos, friends! Thanks for the kind words, they are greatly appreciated...

Cool little movie. And a new t-shirt store to look at? Damn you, Kevin Apgar!

You're welcome. I like the stuff I've gotten from you guys in the past.

I should know better than to tempt you with T-shirts, shouldn't I?