Sorry this is going out so late in the day. I know I've "ruined" my brother-in-law's day by not having it posted in a manner that allows him to read it from work. Oh well. Snippet Wednesday and I are officially failures!

NCIS
I was so ticked off this morning when I logged on to Twitter and saw that somebody had ruined the "shocker" ending to last night's NCIS: Los Angeles. Didn't even put "Spoiler Alert" on the Tweet. Just all right there for the world to see. ARGH!

Sir
The other day, I was walking around during my lunch break with my camera snapping a few photos when I saw a couple of high school guys doing the same thing. We kinda did the whole "fellow photographer" nod in passing. But, later, we actually crossed paths and spoke. I said "hey" to them and they said "hello, sir" to me. SIR? Me? Christ, am I so old that a couple guys in ragged camouflage and Jonas Brothers haircuts are calling me "sir"? Damn.

Running
Okay, week one of morning workouts yielded 7.5 miles of running. Week two yielded 7.25 (I had trouble on Thursday and we didn't run at all on Friday; just weight lifting). But so far this week, I've already run 6.5 miles and Katie's at 7 miles. Woo hoo! Katie actually hit 3 miles yesterday. That's awesome and I'm so proud of her. And we've still got two days of workouts left. 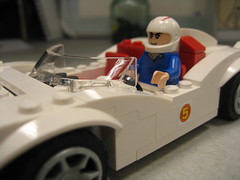 Speed
I was putting some stuff in the attic yesterday when I decided to dig out some of my old office toys that I had stashed away. On occasion, I had purchased a Lego set or two and some of them were stored away when I got tired of looking at them. Well, I decided I wanted to find my Speed Racer Lego sets from a couple years ago for use in a Stormin' Norman idea I had. I looked everywhere in the attic and couldn't find them at all. I looked in a few other non-attic places and zilch. I have no clue where they could be. How do Lego sets up an disappear? Madness I tell you!

Potato
I love when classic toys make comebacks. And one such toy has been the good ol' Mr. Potato Head. He saw a resurgence thanks, I believe, to the Toy Story franchise of movies. And then they started doing specialized tie-ins to other movies and whatnot such as Star Wars (Darth Tater, Spudtrooper, and Artoo-Potatoo), Indiana Jones (Idaho Jones and the Taters of the Lost Ark), and Transformers (Optimash Prime and Bumble Spud). Well, I discovered last week, when checking out Jon Favreau's Twitter account, that they have a Tony Starch Potato Head for Iron Man 2. Way cool. My office mate picked one up for her desk which has prompted me to dig out my Darth Tater. Yeah, another reason I was up in the attic.

Challenge
I think I might have to pick some slightly easier lyrics for next week's Kapgar Photo Scavenger Hunt. I'm having trouble coming up with photos and I'm the freakin' guy who picked the clues. Sheesh!

May 2
The three challenge lyrics for the week of May 2-8, 2010 are: "Look at the faces, listen to the bells, it's hard to believe we need a place called hell." INXS, "Devil Inside," Kick "Time is never time at all,...
Next Post

Every single one of us...

May 8
I wasn't sure I was going to be able to get it done, but I finally got the shots necessary to fulfill my own Kapgar Photo Scavenger Hunt weekly challenge. I'm sorry it was so tough. I've got next week's...

I now have two ideas, but the one still has me confounded. Hope to get them tomorrow!!
I haven't been called ma'am, yet, but I am still in shock that someone made me a mother. Haha

My mom was so excited when she first saw Tony Starch a few months ago that she had to call me to tell me all about it.

I think those kids saying Sir were just polite ;)

Great job on the running! :) You're making fast progress!!!

I've been getting Ma'am'd for years. I've learned to just ignore them. They're young and don't know any better. At least they're respecting their, errr, elders. heheh.

We gave my niece a Mrs. Potato Head for Christmas and apparently it's one of her favorite toys. Some concepts never grow old!

Was it the "Sir" thing that led you to getting your Speed Racer toy out of the attic?

Congrats on the running.

(I really need to get on my bike this weekend.)

I get called sir all the time. I think it is the gray hair. I have no toys in the attic as they are still on bookshelves. The wife shakes her head at me frequently. Wait, is it good or bad to not have toys in the attic. Have to break out my Pink Floyd now.

The case of the missing LEGO sets. I'm going through that here. I had several sets from when I was a kid that I cannot find. I'm this close to scouting out eBay to get a couple of them for nostalgic purposes.

As for Sir, I get called sir here and there from people in the public. It used to bother me, but then I realized it was a form of respect, so I now go with that.

I know they were being polite, but damn. So did you buy your Tony Starch yet?

It's brutal, isn't it? As for Potato Head, good taste!

I think my wife wishes it could be explained away that easily. ;-)

I think you mean Aerosmith.

At least yours were old Lego sets. These were purchased just a couple of years ago. I'm hoping I didn't accidentally get rid of them.

So, for some reason I can't reply to your reply but, not often I get to know what I am actually talking about with music so I must say, I do mean Pink Floyd. Lyric from "the Trial" off of the Wall... "Crazy, toys in the attic I am crazy, truly gone fishing ... they must have taken all my marbles away"

I was going for not just a lyric, but the song title and album title by Aerosmith. Not familiar with the one you're talking about as I'm not a huge Floyd fan anymore. Kinda gave up listening some years ago. Sorry.

People that don't post a spoiler alert should be taken out back and beaten with a stick. Just sayin'.

Don't really get why people get upset over ma'am or sir. Are we really so age-obsessed that signs of respect are offensive?

Hell, I let the sirs I get on occasion slide. I actually miss the days when customer service would address me as Ms. A little formality is a nice token of respect.

As for NCIS: LA. I hate spoilers too, but I found that whole ep pretty predictable.

How do I sign up for the beatdown club?

I think it was less offensive and more a shocking dose of reality I
just wasn't looking for.

You're in your 30s, right? Perhaps sir/ma'am perception is regionally biased. I started hearing ma'am in my early 20s since I lived in FL at the time.

Would you like it better if there were an equivalent to miss for young men? Personally, I'd rather hear ma'am than miss, but miss can be more loaded...

I dunno if it's regional or not. Maybe I'm just not accustomed to such courtesy or respect from "dem young'uns" as this is one of the first times I've ever heard "sir" come from their mouths with regard to me. Weirdness.