Hit me baby one more time...

ALDI
Katie was out trying to use our bank card to buy something today when it was declined. We theorized that it was just a communication error with the scanner, but then it happened at a second place. She called the bank and found out that both of our bank cards had been canceled and new ones issued due to a data compromise on the part of a vendor. While at work, Katie had two customers come in paying by check because their bank cards had also been canceled by their respective banks. They told Katie it was due to ALDI Grocery Stores.

We had seen something on a news teaser last week, but never saw the actual story, so I Googled it and wound up with a bunch of stories about a debit card/PIN number swiping scam that had been occuring at several Chicagoland ALDIs (ours in St. Charles included) as well as some in Indianapolis. Oh yay! As a preventative measure, most banks canceled the cards of customers that had been used at potentially effected stores. Nothing had happened to our account, but it did make us wonder if this was how my bank card got spoofed last year. Hmmm...

So a tip to all you ALDI shoppers, USE CASH!

Brittany
Recently, Katie and I started watching Glee. We're pretty much all caught up on season 1 (missed a couple episodes, unfortunately) and we're up to date on season 2. It's an interesting show. Very well done and the actors are pretty good (even though I want to bitchslap Rachel Barry nearly every episode). I can understand why people are Gleeks over it. 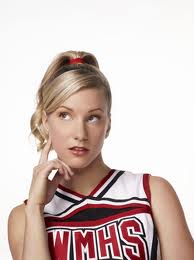 But if there's any one aspect of the show that Katie and I love more than anything, it's Brittany. For those of you who haven't watched, she's one of the Cheerios (the school's cheerleaders) that is actually part of the New Directions (the glee club) and she is to this show what Ralphie Wiggum is to The Simpsons. Both are minor characters that usually meld into the background save for an occasional one liner that is typically more memorable than anything else in the show. She's got some true gems like...

"Sometimes I forget my middle name."

"I was pretty sure Dr. Pepper was a dentist."

"Does he mean like a burglar alarm?" (when told to use protection during sex)

"This room looks like that room on that spaceship when I got probed."

This week's episode, though, was Brittany's time to shine as it was all about Britney Spears. When all done up in terms of costume, hair, and makeup, I often couldn't tell the difference between Brittany and Britney. Eerily uncanny. But, dayamn! Brittany was rockin' the episode. The actress who plays her, Heather Morris, is a former dancer for Beyonce and it shows. She's got serious moves. I've seen her dance in previous episodes, but this was an entirely different ball of wax. All Brittany, all the time. I liked it.

Kevin
I got an e-mail the other day from a guy who shares my last name. I opened and read it and he detailed for me a family vacation they had taken, how his family was doing, that his dog had died and how he was feeling as a result.

Then he wished me a happy 62nd birthday.

Woah. Hold the phone. My birthday's not until December. And, while I know I'm getting up there in age, I'm certainly no 62.

Turns out he was trying to contact a different Kevin Apgar. One whose name I've seen many times when I've Googled myself and he even used to return higher results than me. Not anymore. I've kinda become cooler than him.

I explained this all in a reply e-mail to my mystery sender.

And I offered condolences on the loss of Gus. Sounded like a good dog.

WWF
Now that Katie and I both have iPhones, we've taken to playing a few games here and there. Our latest addiction is Words With Friends, which is basically a spin on Scrabble. Just a little looser in terms of useable words.

Okay, I'm outta here. Talk to you soon. Hopefully sooner rather than later.

Do you know your enemy...

Sep 20
Yesterday, Katie and I did a massively thorough cleaning of the house. Thorough to the point where I was up on a ladder cleaning the Golden Gate picture frames and the high windows and soffet in our living room as... 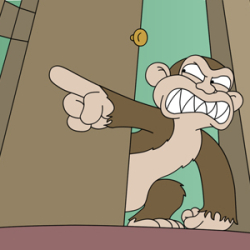 Oct 11
Yesterday, Katie and I were part of the 2010 Chicago Marathon! Yep, we dressed in our workout best, headed into the city, and raced around from point to point along the 26.2 mile course laid out throughout the city. Of... 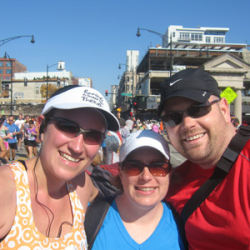 Just a word on Glee.
Holy Crap can she dance... (I actually think she's better than I remember Britney being.) She didn't make the cut (but made the penultimate cut) on So you Think You Can Dance.

There was some line about "I petted a snake" on last night show.

I would totally agree in her dancing being better than Spears. She's freakin' amazing. I saw in her bio that she was on So You Think but didn't know how she did. I'd say it all worked out well regardless. ;-)

I think the thing that really makes the character of Brittany shine is the deadpan line delivery. And I agree about Rachel. I particularly can't stand the overexaggeration on the lip sync.

I don't watch Glee. GAH. All you fans and now I've got nothing to say!
Poor Gus.

THANK YOU for wanting to bitch slap Rachel as much as I do! Even Jackie was noticing that Brittany looked much hotter than Britney. Kudos on the Ralphie comparison. Dead on! Off topic sort of but not ... in addition to Brittany being a dancer in previous life, did you know that Artie (the wheelchair kid) used to be in a boy band?

I'm playing Season 1 of Glee catchup on Hulu. I've only seen a couple of episodes, but it's a fun show. I could see it getting old, but as long as they keep the freshness of each episode going, it could avoid jumping the shark sooner than later.

Her deadpan sells it. I could never keep a straight face saying stuff like that.

Come to the Dark Side. We have cookies... and musical numbers...

Brittany is totally hotter than Britney. And, thankfully, she hasn't endured a very public breakdown. I thought the Ralphie comparison was quite a propos. And I had no idea about Artie. Any band of note?

It keeps pretty fresh. Some topics get kinda old. But being such a big ensemble cast, you get other stuff to look forward to.

I had to look up the name again so obviously it wasn't of any major success lol. The band was called NLT. They were only around for a couple of years apparently.

Never heard of them.

I love Brittany. I find myself smiling as soon as I see her on the screen and I can't wait to see what will come out of her mouth next. She is certainly a gem on that show.

I've read some good things about Glee but it's yet another show I've yet to watch. In so behind on TV it's not even funny.

Behind is far better than addicted. Count yourself lucky.

I remember the thrill I felt when I finally topped Sefton Delmer and Delmer Daves in Google searches.

Admit it... You did a little dance, made a little love, got down that night. Right?