Welcome to my second installment of Snippet Wednesday for the new year!

Second?
Yes, it should be number three, all things considered, but I just wasn't happy with several posts I had created over the last week and never bothered to publish them. That ever happen to you? If it does, do you publish anyway, delete them, or let them sit unpublished in your blogware?

Accident
On the way home from work yesterday, I was driving along a pretty major four-lane road when I hit a patch of ice. I was in the far right lane, skidded into the left lane and may have even nosed into what would've been oncoming traffic, wobbled back into the right lane, and jumped the curb up onto the grass. Thankfully I regained enough control on the grass that I could stop myself just a few feet shy of a utility pole. Because of how I hit the curb sideways, I got out and checked to make sure my tires were still attached and my axles were in one piece. They were. Good Beast.

That whole life-flashing-before-your-eyes thing? Never happened. Is this because my brain realized I still had a fighting chance and couldn't be bothered? Not that I wanted to die, but I'm kinda curious what my brain would've come up with for that final montage. 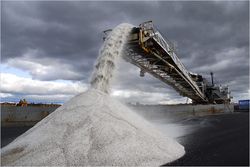 The fact that this happened highlights a growing problem over the last couple of years. Winters seemingly have been getting harsher (hell, a couple weekends ago, 49 of the 50 states received snow... Hawaii got snow!) and the price of road salt, as a result, has gone way up. Of course all this happens as municipalities, counties, and states are suffering rather enormous budget crunches. So now public works departments are, by no fault of their own, forced to be stingier about salt use because they cannot buy as much and must instead wait for what they deem to be "major" snow events before using it.

Believe you me, I understand cutbacks very well. I just wish there was some other way to do this. Some way that doesn't involve me or someone else dying because that layer of black ice doesn't constitute a "major" snow event.

Baby
Katie and I need to offer up congratulations to our friends K&G on the birth of their second baby. The world is lucky she delivered yesterday. Why? Well, her husband is the biggest Bears freak I've ever met (the kind that yells so loud and gets so into it that you fear for the safety of all nearby television sets) and her original delivery date was supposed to be this Sunday... during the Bears/Packers NFC Championship Game... a playoff matchup that hasn't happened in 70 years... a game analysts think may wind up being bigger than the Super Bowl itself. You see where I'm going with this?

Well, she had her baby. The natural world order has been restored.

Cat
It was announced today that the role of Catwoman/Selina Kyle in the upcoming film The Dark Knight Rises will be played by Anne Hathaway.

From what I've heard, there has been a lot of grumbling from fanboys about this casting. I gotta say that I really like it. I enjoy Anne Hathaway as an actress and I really dig on the idea of her going way against type in an action hero environment.

And, in all honesty, the casting crew has done nothing short of amaze me with the casting they've done with the revisited Batman series of films. When I heard Heath Ledger was cast as the Joker, I was wholeheartedly against it. Look how that turned out... a career-defining role.

I'm not going to doubt them.

I'm glad you and your car are okay! Sucks when that happens.
I like Anne Hathaway, too - and really - I don't know why. Sometimes I can't stand her. Like, in theory, I don't like her, but really, I do.
Weird.

Yes, definitely weird. I think you contradicted yourself a couple times there and I'm still not entirely sure how you feel about Anne. ;-)

Thanks about the near-miss. I appreciate it.

Exactly! I can't make up my mind about her. I like her... but, I don't. There's something about her that annoys me, but I like her in stuff she's done.

I didn't like that wedding movie she did. The indie one. Just didn't get it. But I like most of her other stuff. Sometimes even if a movie is bad, I've still enjoyed her performance in it.

Glad to hear you didn't hurt yourself - that could have been a lot worse!

I'm okay with anyone that Nolan wants to cast, because I know he'll get a great performance out of them. I will admit that he does seem to have a weakness in casting female characters, though - Ellen Page, while a great actress, was unnecessary in Inception, and Katie Holmes was the weakest part of Batman Begins. Even ScarJo was arguably the worst part of The Prestige.

But given the "grounded in reality" type of Batman movies they're doing, Selina Kyle doesn't mean dressed up in tight leather, and Anne Hathaway seems to fit in their universe pretty well.

I still haven't finished Inception, but I'd have to agree with your assessment of Ellen but I haven't seen The Prestige. However I think this trend might change with Anne because Catwoman should be a much more focal character being who she is. And Nolan has yet to disappoint me with his hero/villain casting decisions. Here's hoping.

You haven't seen The Prestige? It's so good!

I keep meaning to and consequently forget. Time to put it on Netflix.

I think Anne Hathaway is an excellent choice for Catwoman. Yum.

I am so happy you are okay after that accident!

I cannot wait for the new Batman. We have really liked the first two!

Hey, what did you think of Inception? We watched it last Friday and were bored.

Thanks! As for the movie, I haven't finished it yet. I watched most of it and thought it was okay but got too distracted around Tge time they got to that pseudo Soviet missile silo.

I wasn't going to say it but since you did it first...

So, not sure how I missed this post on Wednesday but ... I usually ost something even if it is crap. Just read some of my posts ... WAY LAME!

Am interested to see if Anne can pull off the Catwoman role.

Prestige is a great flick.

And your little ice slide ... I had that on xmas eve with Jackie and Tori in the car. I have slid plenty but never with others in the car believe it or not. Especially scares you when you have a baby in the car with you. Glad you are ok!

I've had one of those road type flash things happen before. Spinning several times in a small car on a major highway at 2am. No ice. Just spinning. Drowsy driving. That was the last time I did that, I was in my 20's.

Anne Hathaway seems like a good choice. I thought Ellen Page was pretty good in Inception, though, so Nolan may be able to pick good female leads.

Glad all three of you are okay. I'd hate to be responsible for anything happening to others so I'd rather just do damage to me.

Yikes. That sounds horrific. Glad you pulled through okay.

Glad you pulled out of the accident ok, dude. And I'm with you about Hathaway. I like most of the things I've seen her in, and I really dug Nolan's two Batman movies...so I trust the casting.

Thanks, dude. And I agree about both Hathaway and Nolan... obviously. ;-)