Another reason to cry...

Welcome to the first Snippet Wednesday of 2011!!

365
I wrapped up my first full-year photo-a-day commitment. Almost anyway. As you may recall, I committed myself to doing a Photo365 challenge in which I take a picture a day for the entire year. I started it a week late into the year because I didn't know about it right away. I missed one or two days. I mixed up my labeling a little bit, which may have resulted in missing one or two additional days inadvertently. I relied on too many sources (cameras) for my photos. The excuse list goes on and on as to why it’s not 100% complete. But I'm going to do it again. And this time I'm making it a bit more focused so I can keep to it a bit better. Hence I give you...

Insty365
I'm going to pull a Kevin Spencer and use nothing but my iPhone as the source of photos for my 365 challenge. That way, I almost always have it with and can upload quite easily from anywhere instead of having to wait until I offload from my D-SLR and sort and upload as several disparate steps. But, to focus it even more, I'm going to limit myself to the square-format filtered photos that I get when using the Instagram app. I really enjoy the hell out of that app, so why not use it? I've been using it for a few days now for this challenge. Let's keep it going! I’m also going to simplify the labeling. None of this “Photo365 Day xx: title goes here” along with a tag that says “Photo365,” etc. Now the label will simply be “1/2: Title Goes Here” (much easier for me to remember than to have to go back and remind myself what day I was last using). There is also an Insty365 set and an Insty365 tag that you’ll be able to find in my Photostream. I only wish you could add custom tags to photos and assign to sets using Instagram. Hey guys… in a future revision, perhaps?

Wilde
Katie and I saw TRON: Legacy last night on IMAX 3D per a recommendation from Kim and another guy you all don't know named Mike. Not that I didn't want to see it, but I was a bit tentative as not all the reviews have really been glowing. Plus, I wasn't sure I wanted to dish out the funds necessary to see it on IMAX 3D. That's some expensive stuff these days. But both said it was a must so we did. And, tell you what, we really enjoyed it. The effects were great. The action was a lot of fun. The story was pretty solid although not entirely inspired; and, honestly, I think too many movies try to be more complex than necessary these days. 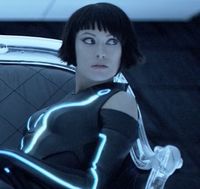 But my favorite element of the film had to be Quorra, the program "fleshed out" by House's Olivia Wilde. I won't lie and say that she didn't look really nice, but I also liked the character a lot. Truly. She kicked some serious ass and I loved the doe-eyed innocence that Wilde brought to Quorra as she was getting insight from Sam as to what life is like on the outside (particularly the library scene).

Bored
Are any of you fans of HBO's Bored to Death with Jason Schwartzmann, Zach Galifinakis, and Ted Danson? My BiL got me intrigued by it a month or so ago and I've been watching season one on DVD via Netflix. Damn that's a funny show. Basically, when Schwartzmann's character gets dumped by his longtime girlfriend, he decides to reinvent himself as an unlicensed private detective who advertises solely through Craigslist. And watching it won't take you much time. Each season is only eight half-hour episodes (22 minutes each really). Check it out if you get a chance.

V
Speaking of television, how many of you were watching season one of V last year? How many of you are going to continue watching now that season two is upon us? I'm on the fence. It's going to have to seriously wow me.

I'm off to watch some Twilight Zone!

I've enjoyed your pics, with whatever app you've been using.
Olivia Wilde is beautiful. I like her, overall. Haven't seen TRON: Legacy, though.
I watched a couple of the V episodes. It was okay, but not mind blowing. If I happen to see any of this season; great. It would have to super impress me to get me back.

Thanks for the compliments on my photos. I really appreciate it. And yeah Wilde is hot.

You've no idea how many times I realized I'd labeled my project 365 photos wrong. I'd be like "wait, it's day 323, why do my labels say it's day 329". Then I'd have to plow through them all trying to figure out where I'd started mis-labeling them.

Yeah, choosing the include only pics from your iPhone will make it a lot easier because, in theory, that will always be with you wherever you go. In theory.

I can't wait to see what you come up with.

I immediately clicked to Netflix to add Bored Like Me to my queue. I love all those guys.

Have you seen True Grit yet? We really liked it.

I hope you added Bored to Death to your queue and not Bored Like Me. Not even sure what that is. ;-)

We did see True Grit and we liked it a lot.

I feel better knowing it's not just me with the mislabeling. But I rarely fixed especially if it was a while back. Too much work and I'm lazy.

We recorded V on Tuesday but haven't watched it yet: like you, I say it really needs to wow me, because I remember being bored and irritated by it by the time the season ended.

We'll do Tron via the Netflix experience one day.. After the nausea I felt for hours after watching Avatar in 3D, I don't think I could survive anything else in 3D let alone IMAX! :p Besides, we're miserly and rarely hit the movie theatres anyway :)

Ohhh, yeah I can see Avatar having that effect. Still haven't seen it and don't want to

Why the Avatar non-love? Not that I'm a fan of it by any means!! Did you know, Avatar is on what seems like *all the time* on HBO nowadays, and the hubs keeps putting it on... I am so sick and tired of the movie! Sure, special effects were great, but the storyline? boooooooring, predictable. I'll always chuckle at "unobtanium" tho :D

It was a movie that in both concept and visual appeal just never did it for me. Never had a desire to see it other than to "say we did" while it was on the big screen. But the time has come and passed and neither Katie nor I feel like we've missed out on anything.

I am happy you ended up liking Tron! I liked that the plot was simple and the effects awesome :) I need those types of movies.

It's refreshing to not have a convoluted plot sometimes, isn't it?

One of these days, I'll branch out and start taking and posting more photos. I need to give Cooper some regular public appearances before I add more to my photo plate.

Haven't seen TRON yet, but will soon. Excited to see what they've done since 1982.

The CGI, especially in 3D is quite pretty. And I can't wait to see what you do photographically.