I can't believe that 25 years ago today, we were mourning the loss of the seven crew members of the Challenger space shuttle.

I remember being in fifth grade at the time and having some sixth grader pop his head in the door of our classroom in Bristol, CT, and informing us that the space shuttle had exploded. And later, at my karate class, nobody was practicing kicks or blocks or even sparring. Instead, everyone was sitting around a little 13-inch television watching the news coverage the entire class. How could you not? This was the most emotionally jarred my generation had ever been.

I was numb as it was really one of my first experiences with death. Not that I personally knew anyone aboard the shuttle even though Teacher in Space Christa McAuliffe, from a mere two states north of where I lived, was a victim.

However, I was a fan of the NASA space program. I had personally witnessed the launch of the first space shuttle with a female astronaut -- Sally Ride -- with my family and my grandparents. Even from as far away as we were, it was pretty cool. I was a kid. Star Wars was my life. So the idea that I was watching someone blast off into what I could only imagine as a galaxy far, far away was about the closest thing to childhood nirvana that I could get. Like most kids, I longed to be an astronaut.

Then hearing about this, a tragedy in my beloved space program, just changed everything. As a kid, it was the first evidence I had seen of a chink in the armor, a flaw in the perfection that was humans in space. There was inherent danger in it, other than possibly meeting up with violence-prone alien cultures. Thinking about it now, I'm pretty sure that was the first time I no longer considered being an astronaut as a career path. I, like many Americans, lost interest in space and shuttle launches. The excitement was gone.

Looking back, it's sad that I allowed my faith in the space program to be shaken so dramatically. How could you not, though?

But this being the 25th anniversary of the Challenger disaster, I'd like to close by remembering:

For more information, check out:

I just get tangled in the sheets...

Jan 27
I wish I knew what the hell happened last night. I went to bed just like any other night. Maybe a hair earlier than normal, in all honesty. I was on my right side covered with the sheets, a thin...
Next Post

We're driving through the valley of the malls...

Jan 30
Several weeks ago, I was at Charlestowne Mall in St. Charles, IL, with Katie to do some shopping and see a movie. While there, I was checking in via Gowalla to both the mall and all the stores that we... 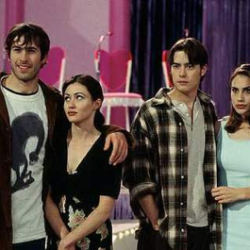 How could it not, right?

I remember being in class when we found out then just watching tv and all the coverage. It was earth shattering.

I think that's all anyone did. The world kinda stopped that day.

I remember watching it in England and couldn't believe my eyes. Such a sad day. Blimey was it really 25 years ago?

Hmmm. I remembered it as happening when I was in college, but I graduated in 1984, so I guess that can't be right. Must be 'old timers'.

I actually remember Neil Armstrong landing on the moon. I used to get up really early in the morning to watch lift-offs and lunar landings and splashdowns. We even had a space simulator in my elementary school. It's really sad to me to see what has happened to the space program since the challenger.

I remember when I first heard about this. I was between classes at college when someone mentioned the space shuttle had exploded. I thought, "what a cruel thing to say" Then upon reaching my next class, they had the TV on and it was all over the news.

Sad explains how I felt when hearing the news.

It did seem like a cruel joke at first. I still wish it was.

Twenty-five years ago... so I was a junior in high school. I guess it's odd that I don't recall any context of what I was doing at the time. I remember it happening, just not where I was. I can make myself remember a school announcement, but that could easily be a false memory.

The reason for my comment, however, is not to pick on my poor memory. Rather, it is to observe that my reaction was markedly different from yours. In particular, I was anxious for the space program to move forward. Not recklessly, but persistently. Accidents happen and I've always felt that the worst result of an accident is inaction. Get back on the horse.

That's a good outlook to have and one that would have served both NASA and our space program-supporting government well. I only wish I had that outlook but I was pretty young.