Archives Profile Subscribe Links Rankings
Accidents will happen...
And I will tell you no lies...

Man I had a dreadful flight...

I really do not like the New England Patriots.

Actually, let me rephrase that... I don't dislike the Patriots as a team or as individual athletes, for the most part. But I despise their quarterback, Tom Brady. And, as a result of this Brady distaste, I root against the Patriots almost any time they play. Sure, Brady has already secured his place in the Hall of Fame, but I'd rather he finish his time in the league on a sour note -- one so sour as not winning any playoff games in the last four seasons -- even if it means the rest of his team suffers as a result.

Sorry guys. Just the way it is.

So you can imagine I took particular interest in last weekend's Patriots vs. Jets game. There had been a lot of talk as there is wont to be when two divisional rivals face off. The loudest of the bunch being from Jets cornerback Antonio Cromartie.

I can handle trash talking so long as you're not just willing to stand by it, but act on it.

As a result of Cromartie's trash talking, I became a temporary Jets fan.

Did I think they could actually win? No, not really. But I was willing to hope against hope. Anything to remove the Patriots from the playoff picture.

I wanted it so badly, I made the following bet with myself as the game was in progress and broadcast it on Twitter...

As you likely know, the Jets won and will next faceoff with the Pittsburgh Steelers in the AFC Championship on Sunday.

I couldn't be happier.

But fulfilling my gamble is proving to be a bit of a prickly affair. I've visited a half dozen sporting goods and hat shops in the area and called another half dozen and none, I repeat NONE, carry Jets hats of any sort. All I could find was a vintage Joe Namath jersey and, I'm sorry, but bets with myself top out at no more than $30, not $125 as the jersey was priced.

I've even visited a couple resale and antique shops in hopes of finding something... anything... that has a NY Jets logo on it. Bupkis.

So, I think you all may have to settle for a Photoshop job. Sad that it has to be this way, but what can I do? Sure, I could order one online. But, by the time it finally arrives, the Steelers will have dispatched the Jets and it would be a moot point. Why try to fulfill that bet so late? There has to be some timeliness to it, right? 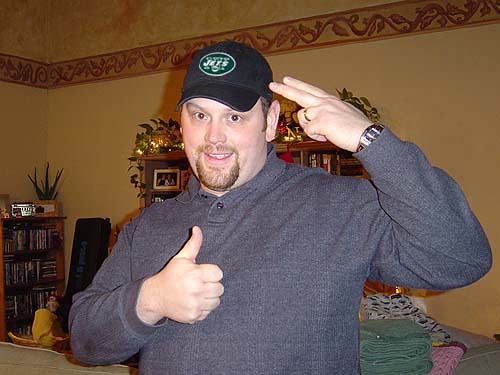 But I am still going to write a poem. Here goes...

Oh Antonio, of the surname Cromartie.
You and the Jets beat the Pats, I say you party!
Prior to the game, you slung some serious smack.
When asked if you regret it, you said "hell no, Jack."
You stood by your insults with great resolve and poise.
Then you took the Pats offense and made them your toys.
Brady's first I-N-T in how many passes?
Whatever it was, you made them look like asses.
A cadre of Yugos facing off against tanks.
For this and much more, I have to offer my thanks.

I never said it was going to be a good poem.

Katie wanted to add her own little rhyme...

There once was a man named Cromartie,
With a fi-fi-fiddle-dee-dee.
He dominated the football field,
While Brady just wanted to pee.

Her poem is much better, even if it was, er, inspired by a certain TV show.

Hardy applause for the poem and your mad Photoshop skills. I also love that you used "wont", "cadre" and referenced Yugos in the same post.

I need to create a challenge in which I properly use several distinctive words properly within the context of my post. Hmmm....

THAT is the kind of challenge I SHOULD undertake. This posting every day challenge thing is BRUTAL!

Yeah I give you big props on the posting every day thing. I did it for a year and a quarter when I first started. Not by challenge but just because it seemed like the right thing to do. It's been all downhill ever since. Hell, I can't even commit to commenting on each of your blog posts let alone write my own. What dies that say about me? How long are you doing this for?

Going to attempt it for the entire year. I am starting to get a few readers on wordpress that are doing it as well and am going to start a separate blogroll, kind of like a support group lol. The big thing is I need to write a few "filler" posts to keep on hold for those days where I just got nothing or don't have time because of something going on. I am loving the challenge though and I think it will stimulate the old gray matter.

It does do that. The grey matter thing, that is. But be careful. It can be rather time and life consuming. I almost became a little resentful of my blog. That might be why I'm not nearly as committed now. Or the grey matter has gone black. Whichever.

Hahahahaha
I love it. All of it. Not a Brady fan here, either. He just annoys me.

Katie can't stand him in the slightest. Thinks he's a pretty boy and very fake. I agree.

I love that you wrote poetry about football.

Not two things you'd regularly mix, are they?

Hey, nice hat. I'm torn for this Sunday. Steelers for Becky or Jets for Baba Booey?

I don't know Baba Booey and, since most of my relatives are from the Burgh, I'm pulling for them Stillahs.

Just getting caught up. I wanted to point out that in your reply to Bob about posting regularly you said "What dies that say about me?"

I'd say it sounds like a rather dire condition :)