It's been a scary long time since I've blogged and, even when I did, my few most recent posts were all about my car problems.

And, yet, I left you all hanging on the outcome, didn't I?

So I'm dedicating this Snippet Wednesday to all the stuff that's been going on in the week and a half since I last blogged.

Truck
As you know, I took my truck in for some work. That work uncovered a need for other work. And there was even some work beyond that. All told, the work-upon-work-upon-work would've equalled more than one thousand dollars greater than the value of my truck in good shape. So I opted out. This, of course, necessitated me bidding a very fond farewell to my beloved Red Ranger. 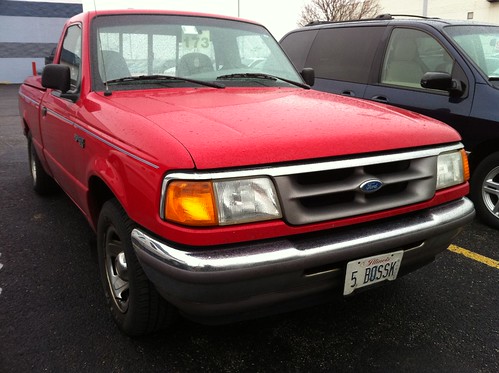 Show
I guess it couldn't have happened at a better time. 'Twas the week of the Chicago Auto Show, after all. So Katie and I ventured into the big, bad city to see what the major automakers had available. The two of us were considering this trip to be nothing but business, I didn't take my big camera like I normally would in order to snap my endless stream of photographs.

WIthout my camera and knowing that this would lead to a major expenditure meant that this trip got very old very quick. I was so beaten down by everything that had happened that even the cars I had always liked up to that point did nothing for me.

We left a bit dejected.

Car
My dad and I began shopping in earnest on the Monday after the truck died and, again, I ended the day dejected. We went out the next day as well and something was clearly different this day. I wrapped things up having placed a deposit on a new car. What kind? A 2011 Hyundai Sonata.

On Thursday night, Katie and I returned to the dealership (with my entire family in tow) and went through a couple hours of tutorials and a lot of paperwork. Now we own it.

And she be beautiful. She drives great. Is ridiculously comfortable. Has bluetooth connectivity. Came with three months of free XM Radio. And, most importantly, we got a great deal that keeps our monthly payment well below what I had set as the max that I was willing to spend. 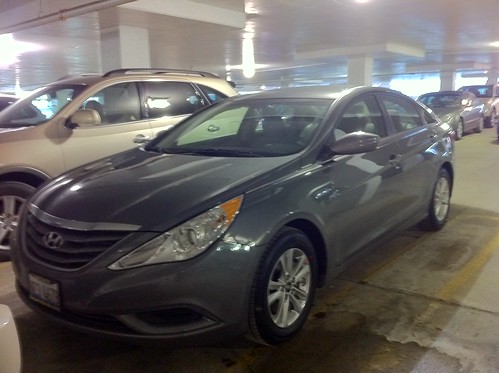 We've named her Grayson. Both because we really dig the character from Cougar Town and because this is a gray Sonata. Get it? Gray Sonata? Gray-Son? Yeah, we're clever like that.

Asian
On Saturday, Katie and I were invited to the Asian American Coalition of Chicago's 28th annual Lunar New Year Celebration at the Hyatt Regency O'Hare. It was a very cool night that involved dance and traditions and politicians and public speaking and food and liquor. We had a lot of fun.

And in the audience were a bunch of local newscasters and politicians, which made us both feel way more elite than either of us ever should. 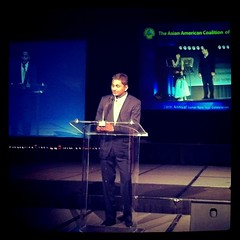 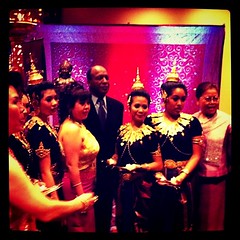 [At left we have the first ever Indian-American Alderman in Chicago, Ameya Pawar, and at right is Secretary of State Jesse White with a bunch of reps from Etihad Airlines.]

The great thing about it all was that it was free. Considering we signed our lives away at Hyundai, free is a very good thing right about now.

So, yes, we're accepting charity right now if anyone is giving.

Realtor
So one of the few semi-free things we can do is watch TV [I'm really reaching on that connection between this snippet and the rest; technically, this could almost be a Totally Unrelated Aside]. So, as I type this, I'm playing catch up on a few weeks worth of Lights Out and Justified. Of course, Timothy Olyphant had to go and pull one of my huge pet peeves in an episode by overenunciating the word "realtor."

Have you been hearing that in television and radio commercials? Instead of the "REEL-tuhr" that I've always used, I keep hearing them pronounce it "reel-TORRRRRR." It bugs the hell out of me.

Blogging
I guess another relatively inexpensive thing I could do is blog some more. I really need to get back in the habit of regularly posting. Doesn't have to be everyday, just several days. And I think I might try redesigning the ol' blog as well. Not just a new banner, but simplify things overall. I'm kinda sick of the sidebar crap. I think I may do away with it entirely. I haven't done any real work on this site in a couple years now. It's about time, don'cha think?

Congrats to you and Katie on the new addition to your family. Kids can be expensive, but I know little Grayson will bring you much happiness.

I'm digging the car! And the fact that you came in under budget is a definite "YEE-HAW"!!! Me? I'm dreading the day my beloved Ford Escape kicks the bucket (probably right after I pay her off) But I'm keeping my eye on the Kia Sol. I dunno...something about rapping hamsters in the commercial and I'm hooked. *snort*

Another free thing you can do is kick my butt at Words for Free. :P

Nice ride! Hyundai has really made some progress in the last few years. I remember test driving an Elantra way back when and thinking "Never!". Now their cars look cool. There's only a year left on my lease (Nissan Rogue) and I'm already looking at options.

i'm glad you are happy with your new ride!

i haven't been to the car show in years. used to love going and acting like an idiot, jumping in the backseat and making out with my date or doing chinese fire drills or getting angry when someone was looking under the hood and i tried to scare them only to find out the damn horn was disconnected. me thinks i need to go back to a car show...i love the silliness that just seems to happen when i get on the floor!

Congrats on the new car mate. Mine is 10 years old and has 128K miles and I want to keep driving it as long as is humanly possible. I've had a couple of high-ish repair bills in the past couple of months so now I really need to keep an eye on whether the repairs are getting to be more than a monthly car payment would be.

As for posting frequency, it's all good, just post whenever you want, we'll all still be here. Oh, and I look forward to seeing what you come up with on your blog redesign.

Should indeed. Do we need to hold a baby shower?

Yeah, we weren't too keen on the previous Sonatas in terms of looks. This one is pretty and very comfy for a big guy like me.

Are you one of the crazies that vandalized cars at the Auto Show.

Driving into the ground is a requisite for us as well. Hence why we like Hyundai so much. Nice long warranty.

As I grow more and more frustrated with my car, the 2011 Sonata is on my list to check out. Please post follow-up posts with how you're liking it! See? Something to blog about!

In addition to that, you can always come out for a real test drive. See? Something to visit Chicago about.

Congrats on the new car. Hyundai has really come a long way since they first started in the 80's, haven't they? Think I'd be bored stiff at a car show. Might be different when I need a new one myself.

Thanks! And it doesn't get any more exciting at a car show even when you need one. If you're not a car guy, you never will be. Closest I come to that is a love of building cars out of LEGOs.

She's very beautiful. And we've heard nothing but good things about Hyundai recently. Everyone I tell that I bought a 2011 Sonata and the eyes get big and the kudos come flowing out. I think we made a great choice.

Congrats on the new car. Looks like it's really nice. Sad to hear about the older truck. But it sounds like it did well. And from the looks of that photo, it looked great even in it's advancing age.

So how was the transition from driving the truck to a car?

I get my first new car later this summer (Nissan LEAF). It will be my first brand new vehicle (not counting the scooter) since November 1986. I'm excited to get something new and different.

As for the lack of blogging, I need to blog more myself. I did really well last week with almost a post a day, then this week, it fell silent after Music Monday. So as a reader, I completely know where you are coming from.

Oh, externally the truck was gorgeous. I never realize how rusted out the underbelly was. I can't wait to hear about your LEAF.

I'm gonna try. I really will. Got Wednesday, today, and tomorrow. So that's a pretty good start.