And the world will be as one...

There has been a lot in the news lately regarding gays and marriage and politics and all that wonderful jazz.

I've attempted to stay silent. I do have opinions, mind you. But I just felt it better to keep them to myself. After all, I don't like to get too politically motivated here on my blog.

However, after reading an article on Slate's XX Factor blog today about Republican Presidential hopeful Michelle Bachmann and her views on homosexuality and also leaving a comment over on Karl's post on the topic the other day, I decided, "oh, what the hell!"

Second, this article about Michelle Bachmann is just ridiculous. Not the article or how it's written; the ridiculousness lies in that there are actually people who feel this way. Basically, she's very against homosexuality. To the point where she has dubbed it, lemme quote Slate here (who, in turn, is quoting the Minneapolis Star Tribune), "a 'bondage' and an 'enslavement.' She has labeled homosexuality a 'sexual dysfunction'."

To add insult to injury, her husband, a Christian counselor, has likened gays to "'barbarians [who] need to be educated, they need to be disciplined.'"

It amazes me that people feel this way. These are your fellow human beings! They are people created by God, fashioned in his likeness, and (apparently only my opinion here) loved by him all the same as anyone else. Seriously, what the fuck??? (Sorry, Nano; I know I promised I'd cut the swearing, but this one had to be said) 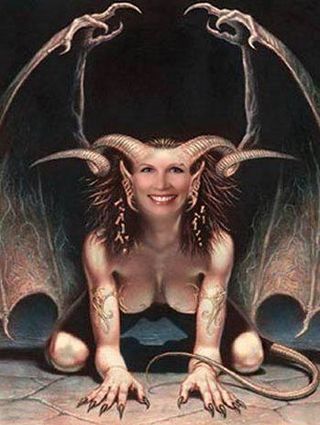 I think what scares me even more is that Bachmann fared as well as she did in the recent Republican candidate debate in New Hampshire. She's spouting this shit and people are buying it lock, stock, and barrel.

There are people who are afraid of what allowing homosexual marriage will do to the institute of marriage or to society as a whole. This kills me. I can't help but laugh as my heart simultaneously breaks. It's like they think that the world will implode. Seas will boil! The dead will rise from the grave! Dogs and cats... living together! MASS HYSTERIA!

Sorry, people. But if you want my pair of Lincolns regarding what will happen to the institute of marriage or to society as a whole should we legalize gay marriage, here it is:

Okay, so none of these points are scientifically supported. It's all my opinion. But, I can tell you that the world will not end. God will not smite humankind. The family unit will not be ruined.

What will ruin this country is if someone like Michelle Bachmann is voted into office and then turns her rhetoric of hate into law.

If she's voted in, can any of my Canadian blogger buddies help me score a job up there north of the border? Please? I'm going to learn the words to "Oh Canada" just in case.

[I wish I could say that I'm responsible for the killer graphic of Beelzebachmann above, but it is the creation of CityBlogs. At least I think they created it. That's where I found it anyway.]

I could not have said it better, Kevin. Tunnel vision is a dangerous thing, and people who subscribe to this are far more detrimental to our society than homosexuals. I am truly ashamed of those who believe as Michelle Bachmann do.

And yet she's being championed by many as the new face of the Republican party. Yikes.

Amen brother. I have been debating all week whether or not to breech the topic myself. I think I still have a few more news stories before I go ballistic.

If you go truly ballistic, I'll forgive the missed post. ;-)

"Dogs and cats... living together! MASS HYSTERIA!" Nearly peed my pants that was so funny!

I agree with you on everything except gay marriage lowering the divorce rate. I think that in gay communites there are the same types of issues that straight couples deal with, we just don't see it up close. I'm assuming in gay relationships there are still major psychological issues, drug and alcohol issues, commitment issues, etc. that would divide a potential marriage. To think that those issues don't exist, or if they do a gay couple can somehow overcome them at a higher percentage than a straight couple, is silly. Human issues are human issues and no sexual orientation will help deflect them.

Oh, and Michelle Bachmann is crazy. But then again I think every Christian conservative is an absolute hypocrite who's never actually read The Bible. If Jesus wanted everyone to be intolerant, HE HIMSELF WOULD HAVE BEEN INTOLERANT!!! Christianity does not mean intolerance and selfishness but that doesn't fit well into their agenda. Christianity means the exact opposite of their definition and it is a shame ignorant people believe politicians like Michelle when they continually spit hate in the name of their religion.

To steal a line from you, those are just my two Lincolns.

Yeah, I just don't get why some people feel it's their right to interrupt or prevent other people's happiness. Especially when those other people don't affect them. Whoopi Goldberg on The View said it best ... if you don't like gay marriage, don't marry a gay person. =)

And, oooooh, if she's the face of the Republican Party, the 2012 election is going to be a field day for the Democrats. We thought Sarah Palin had some quotables in 2008 ... just you wait!

I can only pray someone like Bachman never makes it on the ticket, let alone gets voted into the White House. Closed-mindedness, thy name is Bachman!

I know they have the same problems as everyone else but my feeling is that so many of these couples have been together for so long despite not being legally recognized that they've come to truly appreciate each other as opposed to so many hetero couples that rush into marriage solely because they can. The strength of these gay relationships in light of their fight for equality will make them last longer and be stronger overall. Or maybe that's a pipe dream on my part.

Promises to be a terrifying affair, doesn't it?

Why can't everyone see that??

The only way I can say anything is with lots and lots of profanity, especially when it involves that IDIOT Michelle Bachmann.
So instead, I'll just say I agree with you.

BUT I WANT THE PROFANITY!!

Thanks for speaking up, Kevin! The LGBTQ community needs more vocal straight allies so people can see that the super vocal right wing nutjobs out there are NOT the majority in this country. Thanks for your support!

Happy to do so. Just sorry I held off for so long on it. And why do the haters have to be such a damn vocal minority?

They know that being loud makes an impact and that people will misperceive all the coverage and attention they get as being the consensus view. I recently saw a great clip from Dan Savage about this:

Dan Savage on why liberal Christians need to be vocal - especially to anti-gay Christians:
"I Know You're Not All Like That... Tony Perkins Doesn't"

It just freaks me out how much coverage they get for as small a group as they are. Like the Westboro BC. The church is, what, 30 members strong or some ridiculously small number yet everyone knows and fears them rearing their ugly heads. Sick.

Thanks for this. As you probably know, here in Iowa we currently have legal same sex marriage. As far as I can tell, it hasn't caused fire and brimstone to rain down on us. Unfortunately, there are those who want to repeal the law. I'm afraid that the battle on ignorance is a war that won't soon be won.

Yeah I knew you had it in Iowa. But completely forgot, in all honesty. Maybe that's a good thing. The fact that not enough of a ruckus has been made is a sign that it's going more smoothly than not. But, no, that war will never be won. Maybe win some converts but never a full win. Sadly.