I had an interesting visit tonight to a local hardware store that shall remain nameless for protection of the only marginally innocent.

I went to this store to have them cut the final few tiles I need for our bathroom. The only guy that was in the department was helping someone else, so I waited for him to finish and he came strolling over. I told him what I needed and he was happy to help me out.

We went to the wet saw and unlocked the whole apparatus that they keep carefully hidden within a padlocked case. However, after unlocking it, he discovered he didn't have enough water to run it properly. He told me, with exasperation in his voice, that he would have to go "all the way across the store" to get water for the saw. He left. And he left the saw unlocked.

The associate returned with a five-gallon bucket full of water. While that may not really be all that big a deal, at his age, he should've had a brace around his waist for heavy lifting. Again, not too terrible, but still something that should be done for personal safety.

When he got back, he refilled the water reservoir and started up the saw. Halfway through his first cut, the strap on his safety goggles came loose. So he stopped to reattach the strap. But he didn't stop the saw. He left it running.

For almost five minutes, he fiddled with the strap on his goggles while I stood there and three coworkers walked by looking at him and then at the saw and then back at him. I know they were trying to hide their shock since I was standing there, but it was a very thin veil through which they were disguising it.

I was in shock. I worked in a hardware store for a little more than a year while in grad school. My boss was all about safety and if we ever did anything that went against the store's safety protocols, we would have our asses handed to us on a platter.

I wonder if those coworker/witnesses even bothered to report him. I somehow doubt it. If there's one thing you can be sure of, it's that no one wants to be labeled a snitch. So this dude lives to violate safety codes another day.

For the record, no, this was not the guy I took a picture of yesterday. That guy was safe about what he did.

Katie found this online yesterday and we both felt instantly revolted. As a recipe for stuffing, it starts off pretty okay with celery, thyme, sage, black pepper, and chicken broth. Pretty normal, right?

In addition to the five ingredients above, you're supposed to hand mash 10 White Castle hamburgers, no pickles.

It's White Castle Turkey Stuffing. I can't find the words to describe how truly revolting this sounds.

I cannot stand White Castle burgers. I've tried them... once. It made me sick. And I feel queasy any time I smell them.

The thought of using these things as stuffing on Thanksgiving is just wrong on so many levels.

Posted in Creative Writing, Me & Mine | Permalink | Comments (6)

You're staring at the sun, you're standing in the sea...

Nov 13
It only took me nearly a month, but I finally got off my lazy butt and uploaded the photos taken during our San Francisco trip on my D-SLR. Yeah, I know it's bad to be such a slacker considering I'm...
Next Post

Nov 15
I've been having way too much fun creating little single-cell comic-y sorts of images on my iPhone. Initially, this effect was created solely using an app called Halftone, which I discovered via a friend on Instagram named bminor. It has... 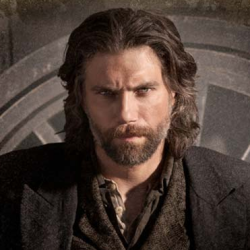 I've heard of White Castle stuffing before! I eat White Castle like, once a year, maybe. I tried to eat it sober once, though - and couldn't. It sounded so good, but the reality was not as good. That stuff is only good drunk. And once a year.
I wish I could say I can't believe your wet saw story, but I've seen some outrageous stuff before in home improvement places, too. Shit- you see blatant disregard for safe practices everywhere, I guess.
So when are you going to post bathroom pics?

As for Mr. Daring No Safety guy, I'm guessing that he will try his luck until he loses a digit. It's unfortunate, but safety needs to be used every step of the way.

I am a sink individual apparently because I love White Castles. They are the original slider before every "chef" in the world decided to put mini-sliders on their menus. Although, I would not probably want stuffing made with them. I might have to try it one day ... just for myself as my family would never go for it.

Still wrapping up the bathroom. Hopefully this weekend. Had to tile in stages. Still have three left. Let it dry, grout, touch-up paint, trim, sink, and toilet. More to it than we anticipated. But trying to do it right by allowing dry and set time.

Amen on safety. But I'm guessing he won't learn his lesson because the bad stuff won't happen to him but to an innocent bystander.

I smell a video post going along with you trying the stuffing.