Tune in for those who are wantin'...

Hi-ho! And welcome to the 2011 Primetime TV Kappy Awards!

For the record, that was supposed to be a sorta impersonation of Kermit the Frog and not an invitation to prostitutes to read this post. Not that prostitutes who are so inclined are not allowed to read my blog. I wholly encourage it. I just don't actively solicit it... or them... or... hell, let's just get on with it, shall we?

As any of you who have read this site for more than a year should know by now, these awards are voted on by both Katie and me. We just sit down and hash it out. Please enjoy! 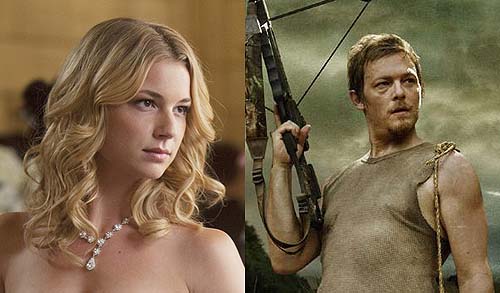 How would you vote?

Been caught stealin' once...

Dec 15
So I'm stealing this meme from Marty who in turn stole it from Avitable. It's like a bad case of WWII-era Nazi art theft. I wholly expect someone to steal it from me in a generation or two and return...
Next Post

Dec 20
I'm writing somewhat of a music post today in preparation for my top albums countdown which I anticipate posting on Thursday or Friday. While this is going to be all over the place and could technically work as a Snippet...

I like Glee better now, particularly since it's had more of a Brittany/Santana arc, as weak as it is. No kiss? Really? Not even in the episode "I kissed a girl"? Grr.

Similarly, I still like Grey's, the only other network show with lesbian/bi regulars (that I know of/care to watch). It's slim pickings out there if you want to see those lives portrayed regularly.

I agree with you on Burn Notice. *SPOILERS AHEAD*

If there is no line for Michael when it comes to Fi, why didn't he just snap Anson's neck that first night Anson reveals his blackmail intentions? I mean he'd only just made that recording of Fi, decent chance that Anson didn't have some if I'm dead this plays out scheme in place. Throughout this latest run, I kept thinking, "Why don't they just kill him already?" You know there's never going to be an end to the blackmail.

I feel like they're reaching too hard to keep the burn notice premise alive. I'm perfectly content to watch Michael help people week to week as he tries to get back in the CIA's graces. The large arc stuff has never interested me that much.

I would love to see standalone mission episodes of Burn Notice. The season arc stories are killing its appeal. I can understand watching Glee for LGBTQ stuff but I prefer Modern Family for that. Yay for Cam and Mitchell.

I love the Burn Notice episodes this season, FOR their complexity. Eh.
Never liked Glee, never watched Revenge, Grey's Anatomy is still on tv?, never watched 2 and a Half Men, ....
I'm probably not the best person to comment on tv shows. Ha

I just think the complexity is going a bit overboard. How many damn layers can there be to his freaking burn notice?

I am over Glee and Grey's and yet I keep watching. I must stop. Also add to that list, American Idol.

Cameron, Phil and Luke win in my book every day!

Modern Family is amazing but we're still BBT junkies and proud of it. Yes, stop those shows now.

Modern Family, Happy Endings and Big Bang Theory are the shows I watch these days. I do like Mike and Molly (mostly because my wife won't turn the channel). I do leave the room when Grey's comes on, though.

And yet another Jimmy Fallon fan. Love it. He's so awesome. He also has a new 99 cent Wake Me Up Calls app on the iPhone app store. Funny stuff. Although no "Reading Rainbow" as Jim Morrison included.

I'll have to check out that app.