Take me in tender woman, sighed the snake...

After the mad dash that was fixing my commenting system, awaiting some feedback, and then fixing the fix, I needed a few days off to recover and make sure nobody else seemed to be having any issues. I guess it's staying as is for the foreseeable future.

Oh, and welcome to Snippet Wednesday. Still haven't heard from you all as to whether or not you can convince Bill Kurtis to record an audio welcome. C'mon people! Help me out.

Powell
I know this is a couple weeks old now, but the thought that Josh Powell took the lives of his two children in addition to his own just to deprive the grandparents of access to them sickens me. Powell, it's not often I do this, but I hope you're burning in Hell right now.

Grammys
Yes, Katie and I actually watched the Grammys on Sunday. Well, to be a bit more honest, we TiVo'd it so we would have the ability to fast forward through the crap we didn't care about. First, the performances were decent. Enjoyed the heck out of The Beach Boys with Maroon 5 and Foster the People. Kudos to Adam Levine for keeping the mic at bay and letting The Beach Boys' vocals shine instead of his own. Second, did you notice how when Chris Brown took the stage, he seemed to be desperately avoiding any contact with the fans nearby (most of them female)? Heh heh. Finally, I think the Grammys' response to why they left out Etta James and Don Cornelius from the In Memoriam segment was complete bullshit.

There were tributes to Whitney Houston from presenters throughout the night and they still had her in the segment.

Graffiti
Walking around today at lunch, this was about the only decent graffiti I could find to photograph. 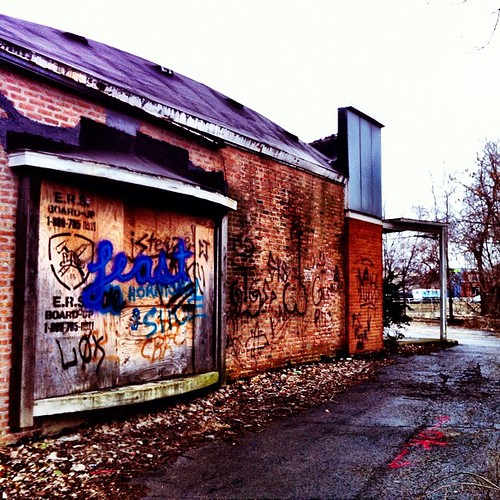 Talk about milquetoast. The youth of this town should be ashamed of themselves and their lack of artistry. I see better stuff on random trains that go by my house. Now that's art!

Perspective
I got the idea for this photo from Kevin Spencer who has, for some time now, been one of my favorite blogger/photographers. I don't think he realizes how many ideas of mine were inspired by his photos. He titled this one "Snake's Eye View" and it simply involves putting your camera at ground level and taking a picture from the point of view of some creature (in his case a snake) much smaller than we humans. So I tried it at an outdoor mall shooting toward the exit and capturing some vending machines on the side. 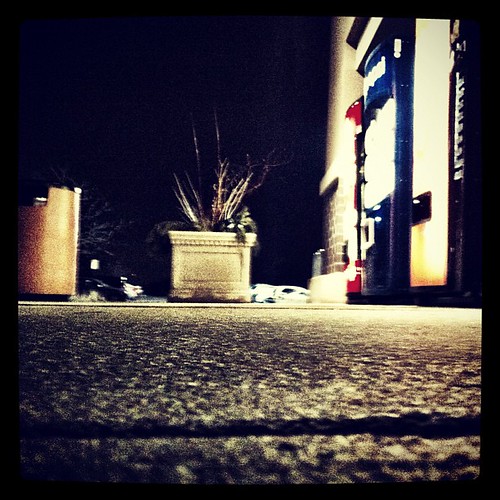 I like how it turned out. Even the graininess of the photo works for me.

Well, I'm outta here. Talk to you all soon.

It was an honest mistake...

Feb 9
So that whole post earlier today about registering to comment here? Let's pretend it didn't happen, okay? Too many issues already in the short time I had it implemented. We'll just pray we can get normal commenting to work again....
Next Post

Today is a birthday...

Feb 16
Just a quick post to wish my lovely wife a happy birthday. I love you, hon, with all my heart and look forward to the crazy years ahead. Together we can do *anything*. And I sincerely mean that. Happy birthday,... 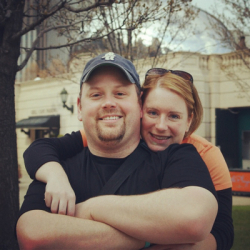 If Powell was so miserable, then fine, take your own life. But to kill your own children...he should burn in hell. And to think he hacked them first with a hatchet. Those poor babies!!

It's sick and wrong on too many levels.

What the hell with this man Powell?? I hope he is being tortured somewhere in another realm or something.

I actually don't watch any award shows. I get so bored with the speeches so I end up switching to something else early on. Yup, that includes the Oscars even.

We have better graffiti in DC. :)

I did not watch the Grammy's but that is really insulting to Etta James that they didn't do more to honor her. She was a bigger deal to music than Whitney (in my opinion).

I wholly support that opinion.

Powell's actions were selfish. I would have preferred he did the coward thing and just took his own life. To take his kids with him just proofs what a sick fuck he was.

For the first time in _years_ we also watched The Grammys on Sunday night. To my surprise, I didn't hate it. Parts of it were just mind-boggling, like why has Chris Brown suddenly been given a free pass? Parts of it were awesome, seeing Dave Grohl digging DeadMau5. And parts were just terrible, that Roman Holiday thingy by that one girl, what was that all about?

Oh, and thankies for the kiind words sir.

What has to be mentally wrong with a person to do that?

I too loved seeing Grohl in the crowd watching Deadmau5 play. And you're welcome!

And to comment on the Grammys, this was the first time in many years I've enjoyed watching. The Beach Boys with Foster The People was great, as were both Foo Fighter performances, and then to end with Paul McCartney with the jam session with Bruce, Joe Walsh and Dave Grohl.

And Chris Brown... why did have him perform twice? Seems trying to expose him was a bad idea, IMO.

You'd think Chris Brown would be a bit gunshy. Guess not.