Hi ho! And welcome to the Snippet Wednesday show! Don't even think of surfing away now. Your keyboards and mouses and touchscreens and whatever else you may use have been temporarily disabled.

Please sit back and enjoy the imposed fun.

Games
I've got a lot of friends that are going ga-ga over the pending release of LEGO Batman 2: The Game. This is another in a long series of licensed entities turned into video games starring LEGO versions of the main characters. I also know these games are a lot of fun as I played LEGO Star Wars: The Prequel Trilogy (movies 1-3) and loved the game a lot despite it being tied into the trilogy I least enjoyed. But, hey, LEGO makes anything fun. Even Jar Jar Binks.

But, if I were to want to try another LEGO license game, which would you recommend? They have a few Star Wars ones, a couple Indiana Jones, a couple Batman, a few Harry Potter, and Pirates of the Caribbean. Also in the works is a Lord of the Rings title and, I would suspect, one starring Marvel superheroes like The Avengers and The X-Men since they hold that license as well. It amazes me the kick-butt licenses that LEGO has obtained. But which game???

Elmo
One of the things I feared most about becoming a parent, stupidly enough, is the potential of having a kid that loves things that I can't stand. Stuff like Barney the Dinosaur or Teletubbies or American Girl dolls (they're horrifyingly real!). Another one I couldn't stand early on was Elmo. Strange considering my love of almost all things Muppets. But Elmo always annoyed me.

This changed recently when I watched a documentary titled Being Elmo all about puppeteer Kevin Clash and his quest to bring Elmo to the masses. All that cheesy love and childishness that Elmo exudes? It's real and it's genuine and it's utterly adorable. I freaking love Elmo now and totally respect Clash for the character he's created.

Rules
Remember my naming dilemma that I blogged about last week? No, we did not decide on boys' names and I can promise you I am not picking something funky and food related or otherwise strange. Katie and I did, while trying to come up with names, find this interesting article on HuffPost outlining rules soon-to-be parents should follow when deciding on a name. It's a really logical set of rules and it has helped us narrow down the field quite a bit. If you are a parent-to-be or just looking for a pretty interesting read, check it out.

Destroy
Have you ever heard of the band They Will Destroy Us? Before yesterday, neither had I. But I found them mentioned in a couple Tweets on Tom Hiddleston's stream (yes, the guy who played Loki in The Avengers) and I was intrigued as I'm always on the lookout for new music. I then went into iTunes to check out their music. You wanna know what I found? They had a couple albums in there with all songs priced at 99 cents each, but so few songs on each album that they should consequently cost less than the normal album price of $9.99. You could pay for each song individually and get almost the whole album at a cost savings. But the highest rated song on each album was listed as "Album Only" meaning you had to pay $9.99 to get it. They're trying to tell me that those songs are worth anywhere from $2-4 each. Sorry, but they just priced themselves out of contention via stupidity.

Sticks
If there's one thing I can definitely promise you about becoming a parent, I will NOT put those insipid stick figure family stickers on the back of my vehicle. Large and small Apple logos? Maybe. But stick figures and stick animals? No. Never. Nuh-uh. Well, unless it's this... 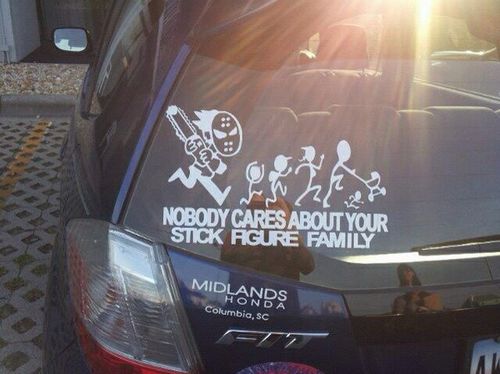 [image courtesy of Enjoy the Random]

Belgian
I had never heard of Chicago Beer Company until tonight when I tried one of their Windy City Wheat Belgian White Ales that I picked up from Trader Joe's. Color me impressed. I think I could learn to enjoy this.

If I stay it will be double...

May 21
As you all know, I've been in the midst of self-enforced photo challenges for a a little while now. This is actually my third straight year that I've been taking part in them. But usually I try to share some...
Next Post

May 24
I like to swear. I'm very good at it. I'm not talking Al Pacino level or anything. I mean, that dude can swear like nobody's business. I do strive to be like him, though. Well, I did anyway. Until the...

Hey bring some of that beer on Sunday! Make sure it's cold!!

The first LEGO Batman game is my favorite out of all the LEGO games, which is why I'm looking forward to #2 so darn much!

That good huh? May have to see if I can nab a Wii or DS version as I have credit at a local Play n Trade.

Those (annoying as hell) stick figure stickers are the new "Baby on Board" sign ... only, holy shit, I saw FOUR of those freaking Baby on Board signs the other day and wondered if I'd be thrown back to the 1990s!

Lego Pirates is pretty fun, and I have played all the Star Wars ones, I bought the complete saga. We also have finished both Harry Potter lego games, all 7 years. As far as I am concerned, all lego is good lego.

Elmo is not anywhere as bad as Barney. Tori loves Mickey Mouse and Elmo. She also loves Abby Cadaby. Abby is uber annoying. Hopefully you will have a boy and Abby won't be as much of an issue.

All those legos, yup, pretty much except for a few of the final fine point things. About 99% on all except Harry Potter which is 100%.

Abby Cadaby is a Muppet fairy trainee who is friends with Elmo. Her voice and laugh is kind of harsh.

I am way excited about the new LEGO Batman 2 coming out. I loved the first game and have played it for a few years now.

I need to go back and rewatch Being Elmo from the beginning. I caught it about 20 mins into it and really loved it. It's on Netflix Instant.