Hey all. Nope, still no kapgar 2.0. So, in the absence of a baby for the time being, how about a Snippet Wednesday?

No, it doesn't seem like an even trade to me either.

Ontario
Yes, Katie and I are still playing the license plate game. It has slowed down significantly, though, since we only have five states left to find - Hawaii, New Hampshire, Rhode Island, West Virginia, and Wyoming.

But you can tell we've been playing it too long when we can immediately, almost eerily, recognize plates even from a distance. Driving to work this morning, there was a white plate with royal blue lettering. Four letters, a space with a small logo, and then three numbers. There was a very small name of the place the plate represented. I thought to myself, "that looks like Ontario." It was. Scary. 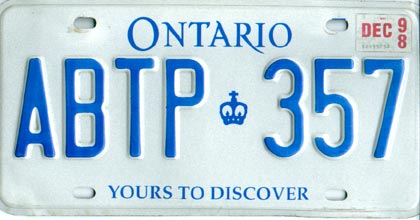 I have no idea whose plate this is. Just a random one I found on the web to show how nondescript Ontario's plate is otherwise.

9-11
Nope, no 9/11 baby. Katie's pick of a Bears vs. Packers gameday baby still rings possible as does Sizzle's pick of Friday the 14th. Any other bets?

Personally, I'm not sure what to think anymore. Oy.

Kinky
So the Naperville Public Library, where I grew up here in Illinois, released their top book loans of the summer. The top six consisted of all three of The Hunger Games trilogy as well as all three of the 50 Shades of Grey books. My interpretation of this phenomenon? 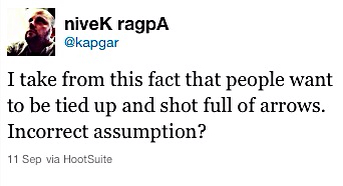 So much for safe sex.

Yarn
To the yarn store that Katie had been faithful to for more than a year purchasing supplies and taking classes... a big ol' middle finger right atcha. Why? They were supposed to order Katie more yarn she was using to make a baby blanket. Four months later, when Katie actually needs it, we find out they failed to order it. Everything else on the special order list had been placed and received. Not hers. And they told her they would have the owner call to explain why it wasn't ordered. That hasn't happened either.

Katie knows that part of it is her fault for not following up with them earlier, but still.

And to YarnMarket.com, the company Katie found online this past Monday at 4:30 p.m. who had her yarn in stock and shipped it the next morning and had it waiting on our doorstep this afternoon when we got home from work when she ordered it using one-week standard ground delivery... you've made a new regular customer. THANK YOU. My wife is tearing through the rest of the blanket as I type this.

Indiana
While Katie knits and I alternate between blogging and reading, we have the holy trilogy of Indiana Jones movies playing in the background. I realize there are officially four movies, but, in my heart, there will only ever be three. Don't try to convince me otherwise. 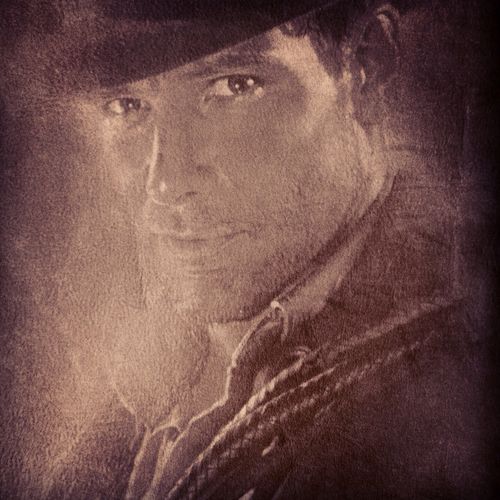 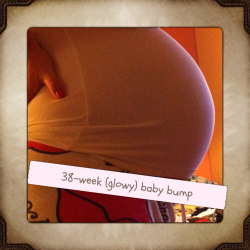 Which one of the movies do you not include?

That crapfest known as Kingdom of the Crystal Skull. Blech.

Crapfest is a very, very kind assessment of that movie.

I was feeling generous.

i didn't like 2 or 4. there are only two raiders movies to me.

aren't first babies always late? you probably don't wanna hear this, but it seems like just last month you announced chewie. it feels like i blinked and WHAM, we are ready meet the little one. (i'm wildly excited for you!)

It flew for us too. And yeah most first kids are late. Doesn't mean we like it though. ;-)

There is no 4th Indian Jones movie. That "other" movie should be burned and never seen by anyone.

Chewie seems to be comfortable! Maybe sometime by the end of this week? I'm guessing if not, then Katie may have to be induced? I really hope Chewie decides to make an appearance soon.

We're hoping for sooner rather than later an to avoid both inducing and a c-section. C'mon Chewie!

I used to love playing the license plate game when I was a kid. The license plates were easy to spot and to tell apart. Now a days, they seem to be similar. For example, Google Idaho license plate and then Utah red license plate. They look so similar it's hard to tell what state the cars are from when buying lottery tickets in Fish Haven, ID

Driving close enough to tell the difference and not die is half the fun!!