Oy. It's been a long week so far. Sad thing is that we're only half way through it. What better way to pass some time than with a Snippet Wednesday!

You'll note that last sentence ended in an exclamation mark and not a question mark. That's because I really don't want you to make alternate suggestions as to how to pass the time. Really. Let's just pretend it doesn't get any better than Snippet Wednesday. Do that for my ego, will ya?

Five
As I haven't blogged since Saturday, I never had a chance to point out that yesterday was Nathan's five-month birthday. WOAH! Five months? Where does the time go?? Happy name-month, kiddo! Your mom and I love you more than you'll ever understand. 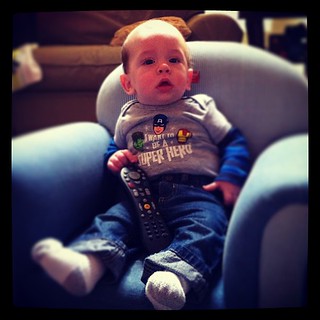 Vine
There's been a lot of to-do lately about this new video creation app for iOS called Vine. Basically, it's a social media app in which you follow friends or other people and create, share, like, and comment on videos that they create in-app. Each video can be no longer than, I believe, six seconds and can be a single cut video or contain as many cuts as you can fit in the time constraints. There are no editing tools at all in the app and that's both the way it should be and likely will remain. By limiting the time so strictly as well as eliminating special edits and effects, the video uploading and streaming takes no time whatsoever. And I can share them to Twitter and Facebook.

I've made three videos so far - two featuring Nathan and one of me and my morning coffee. If you have an iOS device, the app is free and you can find me via my Twitter handle of @kapgar.

Sadly, because it's all app based, there is no method for me to share the videos here of which I'm currently aware.

Hacking
As it stands, my wife, both sisters-in-law, and one of my brothers-in-law have all had their primary email accounts hacked within the last handful of months. Of course, mine was hacked a couple years ago in a much worse way as I lost access to both my Gmail and Hotmail accounts entirely. These other hacks just sent an email to everyone in their address books but they retained access and could change their passwords to provide greater protection.

My question is why? Why do hackers hack personal email accounts just to send some bogus link or phishing message to an address book's worth of contacts? It seems so... 1998. Is this some sort of introduction to the world of hacking in which you have to prove you can do something akin to crawling before the "walk" that is hacking a bigger website or mainframe system? I would think most hackers would look at a person who hacks an email account and just laughs at them for their inferiority.

Hard
Am I the only person who has absolutely no desire to see A Good Day to Die Hard? I saw the Die Hard installment previous to this one (Live Free or Die Hard) and hated it. I really wish that the series would be left alone. In fact, it's this constant stream of half-assed action-adventure sequels that makes me scared of almost anything that features Bruce Willis these days... A Good Day to Die Hard? Nope. G.I.Joe: Retaliation? A bit afraid. Red 2? Why???? Is Bruce going bankrupt and, consequently, agreeing to any script thrown his way? Someone make him stop.

Paddington
Lately, Katie and I have been really enjoying reading Michael Bond's Paddington Bear stories to Nathan to help ease him into sleep each night. They're truly fun stories that, on occasion, leave the two of us in stitches as we attempt to read them. Last night, I read him Paddington and 'Do It Yourself' (1960) in which the namesake bear attempts to make a plywood newspaper and magazine rack as a gift for Mr. Brown. The description of his woodworking ineptness was so well written that Katie and I were struggling to stifle our laughter to keep from startling Nathan awake.

If you haven't read these stories, you should. Go. Now. Read.

Ink
I've been wanting another tattoo since I got my first one 17 years ago at the age of 21. Yes, it's a long time to wait, but I've had all kinds of trouble figuring out what I would want as another tattoo. Being such a permanent thing, it's gotta be just right. It can't be some half-assed decision. Well, I've finally got an idea, but I now need money. Tattoos cost a lot more now than they did 17 years ago. Scary more.

Enter Kickstarter... this is a web service that allows you to create public campaigns to raise money for any sort of thing. I've seen really good ideas on the site (saving historic sites from going out of business) and some not-so-great ones (just Google "bad Kickstarter campaigns" for an idea). I was thinking, for kicks, that I should try to see if I could get a Kickstarter campaign in place for a tattoo. It's kind of a joke, really, but most of the people that replied to my Tweet about it earlier in the week seemed to think it would be kinda cool to try.

Time to go, y'all. Have a great rest of your week.

Love me some Paddington Bear! Can't believe how much Nathan has changed in such a short time!

I don't know how to share a Vine video directly... but you can still copy a tweet which includes a Vine video from Twitter.com, like I've done on this entry...
http://www.blogography.com/archives/2013/02/excursion.html

Yeah. I thought about that after posting. It would work. What would work better would be embed code or a way to backup to YouTube or Flickr from which we could create embed code.

Has it really been 5 months? Wow, that has totally flown by. You're not alone in having no desire to see the new Die Hard movie. The first two were good. Don't even remember anything about any of the others - or even how many there have been at this point. When I read that there was going to be a new one my reaction was "meh".

I've been enjoying the Vine videos you've been posting.

And of course, I would donate for new ink.

No sure I have the nerve to actually do it on Kickstarter.