My challenge? To make sure I still have enough stuff to populate a Snippet Wednesday after creating a Snippet Tu(n)esday music post yesterday.

Purge
I know I already underwent one iPhone app purge this calendar year, but I actually have been actively involved in a second one for the last couple of days. I think I've gotten rid of a dozen apps that I barely or never use. You know those ones... Oh, I'm sure I'll use it some time! Better to have it and not need than need it and not have it.

That's crap. Drive space is a precious commodity. If you don't use it, get rid of it. You still own rights to it and can re-download it later. Bye bye. Heck, I just deleted two more right now. Feels good.

Wonders
Speaking of apps, I got a few free download codes for some iOS app called Brian Cox's Wonders of the Universe. It's billed as "a 3D tour of the cosmos" and a code is yours if you want it. Let me know in the comments. BTW, it's a $5 app without the code.

Flight
Last night, Katie and I watched the Denzel Washington movie Flight. While Denzel was freakin' spectacular, as always, I gotta say that the film wasn't what I expected it to be at all. And then, when I try to put into words what it was that I expected of the film, I cannot. Is that weird?

Library
The librarians at the local library have come to expect that every time I visit now, I'm going to have Nathan with me. I'm not kidding. They see me and they suddenly crane their heads over desks or around shelves to see if the telltale carseat is in tow. And you actually see a crestfallen look on some of their faces when I don't have him there.

But, when I do, they all go googly eyed. I could probably load a bag with DVDs, CDs, and books and walk right out the door and they wouldn't care because they got to spend time with Nathan. One time, I asked if I could leave a stack of stuff at the front desk that I was planning to check out while I went in back to find more. The librarian said, "I'd rather you leave Nathan with me to watch while you go back." Dead serious. So I did. And she played with him. I love my library.

GoPro
My brother just gave me a GoPro digital video camera. This could be trouble. A GoPro with my bike, or with my R/C car, or even attached to Nathan as he learns to crawl and walk? Ho boy.

Worship
Katie and I have been meaning to start going back to church. We will. Honestly. But, in the meantime, there's always the Church of Firefly... 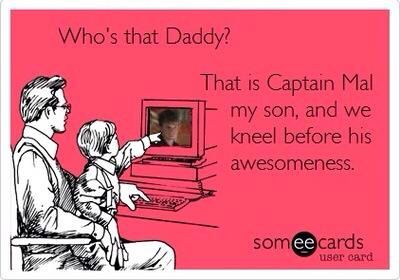 I did! Two days of snippets in a row.

I must crash now.

A wee camera on Nate?! That would be awesome!

I love our little local library as well.

I've done the same with some apps - just deleted them if I haven't used them in a while. Kind of like purging clothes I'm just not wearing.

Will he grow up hating me if I attach that camera to him?

I'll always be forever at a loss as to why they cancelled Firefly. So good. So very very good.

Wasn't it though? Stupid FOX.

Which GoPro.... the new HERO3 or the previous HERO2? I love my HERO2, and am eyeing the HERO3 due to it being smaller and having less of the fish eye lens effect.

Flight is on my list of movies to watch that I didn't before the Oscars.

I picked up that same free app card at Starbucks. Haven't redeemed it yet, but it's on my list of things to do here before the code expires.