It was a very good month, when I was just 38, that August went by really great.

Okay, enough of that. There will be no singing on this blog! Take it elsewhere. This post is all about recapping the progress I made on my 2013 Goals through the month of August. And I'd say I made pretty decent progress, indeed. Check...

1. Convert old site to Typepad
I mistyped last month stating that I was through July of 2000 when, in fact, I was actually in January of 2000. Oh well. Mistakes happen. But this month, I made it through July of 2001. So, not bad. Updating has slowed down as I've found myself needing to convert a greater number of posts as each month progresses. There was even one month in 2001 where I posted every single day. Soooo ambitious of me. But, where I could post four or five months of old stuff in a single lunch break, I'm now lucky to get through two months. This is gonna be close.

2. Read the entire run of Kirkman's Invincible
I am now up through issue 57 (into volume 11 of the trade) of 104. I really love this comic. One of my new favorites.

3. Listen to one new band per month
As stated last month, I did decide to try out something new this month. Well, it's new in one respect while being very old in another. While at Pitchfork last month, my buddy Eric found a CD from a very obscure black punk rock band from Detroit named Death. They released one album -- ... For the World to See -- back in 1974 and that's about it. So he got it and I listened to it and it's good. Really good. Although, by listening to the first track, "Keep on Knocking," you'd never guess they were punk rock. That song actually sounds like something that should have been done by Kiss with Ace on vocals. But "Rock-n-Roll Victim" does bring the punk sound in pretty solidly. I really enjoy listening to this album.

Next month will be rap. I think.

5. Try three new recipes per month
Like last month, we got two new recipes although my mother-in-law offered to let me use something new that she cooked for us as our third recipe, but that would be cheating! The two we did make were a taco casserole and beer can chicken. I have a photo of the beer can chicken below. He looks uncomfortable after several hours of tanning himself to a crisp. Can't say I blame him. I wouldn't want a beer can up my butt either. 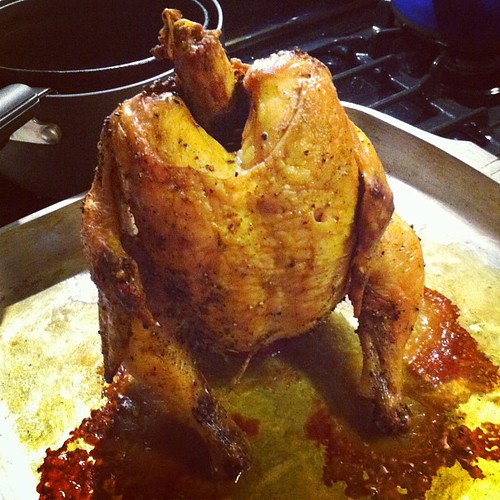 7. Run three 5Ks
While we did take part in the WTTW Family Run & Fun, I did not run it. But I am going to start again and get myself back up to snuff starting Tuesday so I can do the Naperville Crimestoppers Running Scared 5K on October 26 and probably our local Turkey Trot on Thanksgiving morning. I need a costume for that Running Scared 5K. Hmmm...

8. Post monthly updates on my progress
You're reading it.

Sep 1
I was planning to live blog the live draft in my fantasy football league but completely forgot until about halfway through the draft. So here goes what's left... QB - Aaron Rodgers, Green Bay (the third year in a row...

What a month of progress. This is really cool. The chicken looks very alive in that cooked state he's in.

Poor chicken, right? And thanks. I was happy with last month too.