Welcome to my July recap of my 2013 goals. I gotta admit I feel better about my progress last month than at any other time this year, so far. Sure, it wasn't perfect, but it wasn't as bad as it has been. So, YAY!

Let's begin, shall we?

1. Convert old site to Typepad
I have now posted through the end of July 2000. Yay for a new millennium!

2. Read the entire run of Kirkman's Invincible
Whereas I thought this goal was dead in the water due to cost, I happened to procure the next four volumes (6, 7, 8, and 9) of Invincible and have read three of them bringing me to issue 41 of 104. If I can continue procuring in this method, I may be able to finish this goal yet! And volume 18 was just released yesterday.

3. Listen to one new band per month
While I'm continuing with this goal, my enthusiasm has waned more than just a little bit. This month, I listened to the album Waiting For the Down by The Mowgli's. I really love their song "San Francisco" and hoped the rest of the album might be as good, but it's left me feeling a bit hollow. I can't really explain why (hence why I don't write more music reviews), but it just held little to no appeal for me. Sad. And this emotional dissonance regarding new music lately is why I'm lacking enthusiasm for this goal. I might change up genres next month. Maybe some rap. I gotta do something so I can keep going with this goal.

4. Watch through season 4 of Sons of Anarchy (SoA) and season 2 of Game of Thrones (GoT)
As you know, the half regarding GoT is done and I'm now up to season 3, episode 4 of SoA. Very positive progress.

5. Try three new recipes per month
We didn't get all three recipes in this month, but we did get two... a rhubarb pie and a barbecue pulled chicked and slaw slider. Got a picture of the latter below... 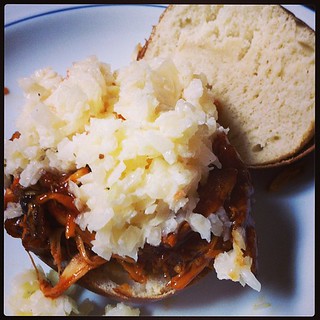 7. Run three 5Ks
This is the only goal where no progress has been made. Every time I've tried to put a little pressure on my left knee to simulate the impact I would get during running, I wind up wincing in pain. It's getting better, just slowly. I'm hoping to try jogging again in another week or so. As it stands, though, no more 5Ks run and none planned at the moment. I don't want to pay for a race and not be able to run it, yanno?

Jul 31
For a second there, I really thought I was going to miss this Snippet Wednesday. Usually I have a series of potential Snippets (along with other writing ideas) stored in my Clear app. I have compiled nothing... zilch... zip... zero......
Next Post

Aug 4
Sure, there are many things going on this week. Things of great value and societal import. But none, I repeat NONE, are greater than SHARK WEEK!!! YES!!!

Be careful when running/jogging. Matt has had knee problems for a a couple of years now and will need surgery later this year because his meniscus is torn. If it keeps giving you trouble and if you haven't already done so, go see a doctor. Trust me on this, it's not something you want to wait on (my dad had problems with both his knees as well).

And what's the common thread between Matt's knee and your dad's knees? YOU! You're a knee jinx!!

Nice progress. The 50% posting for the year goal is moving along very well.

I only hope I can keep it going. Rough sometimes.