This is quite the odd mix of topics for Snippet Wednesday. Not that it's not usually an odd mix, just even odder, if that's even a word. 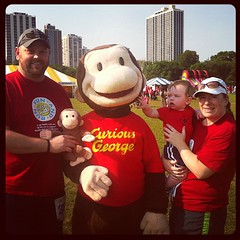 This weekend, Katie, Nathan, and I took part in a WTTW (Chicago's local PBS station) Family Run & Fun event at Lincoln Park with Katie's family. It was a lot of fun even if we didn't do the run part of it all. Nathan got to meet Curious George and Elmo and we even trekked a little into Lincoln Park Zoo.

But an odd thing happened on the way to the coliseum, Katie looked over as we were picking up our goodie bags and said, "Hey, isn't that Nilsa?" Bear in mind, Katie has never met Nilsa. She only knows her from pictures on her blog (yes, my wife is a blog lurker). But she recognized her and her son, Gavin, so we said hi and talked for a little bit. It was really cool to see the two of them and Nilsa's husband, Sweets (as she calls him online; not his real name, I hope). I hadn't seen Nilsa or Sweets in something like four or five years.

Android
As if I needed another reason to love my iPhone, a recent report states that 79% of malware attacks on mobile devices in 2012 happened to those running Google's Android OS. Developers may call the iOS App Store "Draconian" with their policies, but I'm sure that tightfistedness is what led to Android becoming such an easy target.

Kickalicious
Poor Kickalicious got cut by the Detroit Lions. In all fairness, before I saw this headline, I had never heard of him. He's a Norwegian guy who has incredible distance and acrobatic abilities when it comes to kicking U.S. football ("handegg"?) field goals. You gotta check out the video on the linked article above. Spectacular kicks. But, in all honesty, if I were an NFL scout, I'd be checking to see what kind of speeds those guys receiving his kicks can get up to because they are just amazing catches and what NFL team isn't on the lookout for the next Devin Hester?

Folding
Could you drive this? Comfortably? I'm not sure it would be possible for me. Also, if that folding is meant to allow it to fit in tight spaces, wouldn't it first have to be at full length to pull into the tight space thus negating the space savings afforded by the "fold"? And, if you can fold before paralleling into a small parking space, how the heck do you get out of that thing once it's folded?

Mob
It looks as though Frank Darabont's Mob City is finally going to air! I've been looking forward to this show since it was still just a concept named L.A. Noir that had former The Walking Dead (TWD) costar Jon Bernthal (Shane) attached as a star. I want to see it because I love Frank Darabont (co-creator and former showrunner of TWD and director of The Shawshank Redemption, The Green Mile, and The Majestic, among others) and because Bernthal's Shane was one of my favorite characters in TWD. It should finally air in late November or early December and I am soooo looking forward to it.

Time to go. Enjoy the rest of your day!

Aug 27
I was a bit floored by an article headline I saw crop up in my Google News page today. "Second young man disappears in southern Oregon after reading 'Into the Wild'". Into the Wild is a very short book by...
Next Post

That is so fun that you guys randomly ran in to Nilsa and crew! :)

Are some of the most recently posted pictures a little older. The one with his wet hair makes Nathan look younger. Still as cute as a button, though!

Yes, the newest are older. They were from Katie's point and shoot and we just forgot to export them.

I'm a small person and no, just NO to that car.

The report on that car indicates that it can be parked with a smartphone app.

And I would've totally missed them if not for Katie recognizing Nilsa and Gavin.

Even if I were small, I don't see it happening.

I can't imagine that being an ideal way to do things. Get out of the car on the side of the road, fold it up, fire up your phone, get the app to load, then park it all while blocking traffic behind you if it's a two-lane road. I just... no.

Someday, I will make the trip to Chi-town and randomly run into people at the park (well, no.. it will be a planned trip so I can meet all of you in person). I've met Kim, but she had to visit SLC for that to happen.

The fragmentation of Android OS bothers me on many levels. My AT&T phone is an Android, running ICS (Ice Cream Sandwich) 4.0.4, which has a bug that drains the battery in nothing flat... and I don't use it near as much as I do my iPhone, which gets me almost 2 days with heavy use (as long as I am not roaming). Plus, the added fact that the iPhone is much more stable and doesn't crash or do weird shit every so often (as does my Samsung Captivate does).

I dislike the lack of oversight on the Google Play Store. Anything can go up there.