Didn't I tell you yesterday that I would be back today with a legitimate set of snippets for a Snippet Thursday: The Reckoning? And you didn't believe me?? As Grandpa Simpson would say, "For sha-a-a-ame!" 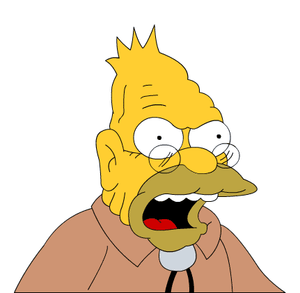 Curdling
We recently changed Nathan's formula because he's to the point where he should be getting toddler stuff. Yes, we are also getting ready to phase him over to milk, but there is still formula in the equation and it needed to not be infant level. Funny thing we discovered was how quickly it curdles. Apparently this new blend is milk-based instead of soy-based like his old stuff. I cleaned out a bottle last night that still had some unfinished formula in the bottom. It plopped out in the sink in a light, foamy, almost mousse-like whip. Really weird. Makes you think twice about dairy products.

Printing
One thing that ticks me off as a consumer is when companies send you coupons that require you to install software on your computer to print. Half the time, the software isn't compatible with Macintosh, which is all I own. The rest of the time, it's not compatible with mobile devices. I rarely ever fire up our desktop/laptop computers at home. We just take out our iPhones or iPads so not being able to print from those is a true inconvenience. If they want to track coupon printing and nullify the possibility of coupon duplication, just have us set up user profiles on the website. The coupon can then be individually customized to the user and all those tracking/duplication concerns are nil. Don't make us install printing software. I don't trust it. Yes, I'm looking square at you, Enfamil.

Educating
The other day, I was watching the preview of Today that runs at the end of our local morning news. Behind Matt and Savannah, there was a woman holding up a sign that read "Today is my 50th birtday!" Clearly you should have spent more of those 50 years in school learning how to spell, lady.

Conditioning
During the early part of this week, we had a heatwave. Many area schools were closed as a result because so few have air conditioning. Basically what this means is that the school year will likely be extended to make up for those days. The schools will need to be kept open and operating, bus drivers will need to be paid extra (since I'm sure they still got paid for showing up to work on the heatwave closure days), non-salaried staff need to be paid for the extra time, parents have to find daycare for their kids or take time off work, companies could lose money, etc., etc., ad infinitum. All this financial expenditure and strain to counter the heat. In the grand scheme of things, wouldn't it wind up being cheaper and more convenient to just retrofit the schools for whole-building air or find some company willing to sell bulk amounts of window air units to schools at discounted prices? Maybe I'm missing something. But I would think if you performed a financial analysis of the extra money spent (lost) over the number of years that constitute the lifespan of an a/c unit, you'd find the a/c units would be less expensive overall.

Cleaning
During my morning commute, I drive east into the sunrise. During my evening commute, I drive west into the sunset. Blurry, smoky, foggy, buggy, or smudged windshields piss me off to no end. What I want to know is when will someone either come up with a sure-fire way to keep your windshield free of this crap at all times or when will someone come up with a self-cleaning windshield? Hey, they have self-cleaning ovens, why not? Nothing seems to work.

Opening
As a diehard junkie for the original Robocop film -- I own the no-longer-in-print Criterion Collection DVD with bonus footage and all that good stuff -- I know I should hate the fact that a remake has been made and is coming out in the early part of 2014. I should... but I actually find this trailer intriguing.

Separating
Why is it that anytime I hear of people I know getting separated or divorced, I just fall into a deep funk? Even in those instances where I know that what they are doing is the only option they have left because they've exhausted all other avenues? I found out that two of my online friends recently separated. They'd been keeping it low key, but one of them said something on Twitter about "separation," so I asked. They've been apart since June. And they have two young kids. Sure, the kids will adapt being as young as they are and being two-household kids doesn't have the stigma it once had. But I still feel bad for the kids and the parents. It just sucks.

Robocop? Based on that trailer, count me in!

Typically remakes terrify me but that one looks like it could be decent and the cast? Oh the cast! Did you see that Miguel Ferrer was back? Different role but still him.

I refused to redeem the Coffee Mate coupons because they require the coupons.com installed plug in. It never works half the time and every time I do get it to work, the Coffee Mate site tells me that I've already printed the maximum number of times.

I actually complained to customer service at Enfamil and they snail-mailed me coupons.