Today, I said good-bye to the first iPhone I ever owned, my trusty iPhone 4. I've had it for three years and two months and a few odd days beyond that. I've never had to trade it in or send it back for fixing or any of the other problems that smartphone owners sometimes have necessitating getting a new one.

No sirree, Bob. Just this one iPhone for me. 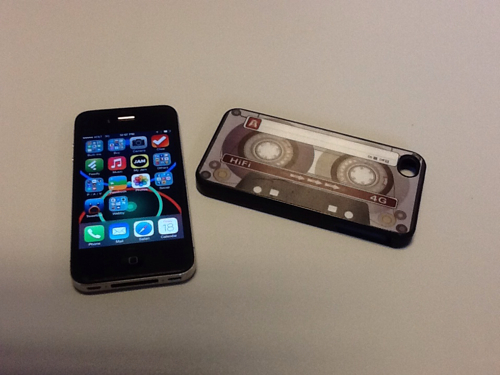 Lately, though, the 4 has been showing his age. The Home button isn't as responsive, apps load slower, newer apps are increasingly being optimized for phones well newer than this one... that sort of thing.

I knew it would happen, but I didn't want it to. The funny thing about Apple products and me is that I tend to become attached to them. I still have my very first G3 PowerBook (bronze keyboard) from 1999. I can't part with it. I still have my first iPod (third generation) and it still works. I have my first generation iPod Shuffle and use it. I know many Apple owners are the same way. They develop an emotional attachment to their devices the likes of which you never hear about with Android and Windows users.

But with the aging and a killer deal at Best Buy this week allowing for the purchase of a new 16GB iPhone 5C* for $1 with trade-in of any working smartphone, Katie and I decided now was as good a time as any to start really looking into them.

Yesterday, we hit the Apple Store - Main Place in Naperville and I asked them about a trade-in value on my iPhone 4. They made me an offer of $101. That's $2 more, technically, than Best Buy was offering. And I get to do it at an Apple Store, a place I feel much better about spending my money than Best Buy.

So I** now have a white 16GB iPhone 5C in one of the Apple dark gray cases and, so far, I love it! Sure, I miss my iPhone 4 and will remember it fondly for how great it's been over the years, but this 5C is ridiculously fast.

I forgot how blazingly quick iPhones can be.

* Note 1: After very careful consideration, I just didn't see the need to spend an additional $100 on an iPhone 5S for a slightly faster processor, better camera, and thumb scanner. In all honesty, any processor is faster and any camera is better than my iPhone 4. And, in less than a year, the 5S will be outmoded, too. So it was a matter of leveraging cost savings now versus the quality difference of features. Cost savings won. Hard to beat a $1 iPhone.

** Note 2: We will be getting Katie's iPhone 5C either later tonight after work or tomorrow morning. We're going to trade in her old iPhone 3G at Best Buy. The Apple Store only offered $27 for it so we figured it's better to get the bigger trade in value at Best Buy. We plan to keep Katie's iPhone 4 to use for apps, photos, storybooks, and music for Nathan. He actually has a pretty decent grasp on how the thing functions. Better to use a somewhat more modern iPhone for that as most of that stuff probably won't work at all on an iPhone 3G.

I know what you mean about attachment. I still have my iPhone 3GS although I wouldn't mind selling it if I could get at least $50. Does Apple offer money only if you're buying something else? I'm not ready to upgrade from my 4S yet. I'm waiting for the iPhone 6 and crossing my fingers the screen will be a little bigger.

Only if you're buying something else. No trade in at Apple Store or Best Buy otherwise.

Congrats on the new iPhone. I like that the Apple Store was the chosen option (they had the better buyback plus no patronage for Best Buy).

I always liked the cassette case you had for your iPhone 4.

When I got Katie's 5C at Best Buy last night, they told MRI would've gotten $135 for trading in my 4. The $100 was just a baseline regardless of model. Grrr.

Nice. I'm a little unsure of what to do here myself. My 4S still seems to work ok and I've been happy with the upgrade to iOS 7 on it. My brother in law got a 5S and he told me that he hasn't really noticed that much of a performance benefit from the upgrade from his 4S.

I don't really know that forking out $200 for a 5S is really worth it. I might go your route and get a 5C. Or just wait until next year to see what a potential iPhone 6 might be? Maybe an upgrade from a 4S to 6 would be worth $200?

If your 4S is working fine, stick with it. Our 4s were slowing and sticking so it was time.