I was rally having difficulty coming up with good Snippets this week as the news is inundated with the U.S. Government shutdown, as it should be. But I really don't want to talk about it. I'll leave that to the self-proclaimed political pundits on Facebook.

Then I remembered how much I enjoyed writing up that post about Nathan's favorite TV shows a couple months ago and thought I might do something similar. So I bring you today, a Snippet Wednesday dedicated to some of Nathan's favorite children's books! Or, our favorites to read to him. Considering kids books are so timeless (usually), I figured this post might have broader appeal. So feel free to weigh in on your favorite children's books in the comments.

Little Blue Truck and Little Blue Truck Leads the Way by Alice Schertle and Jill McElmurry
There are actually two books in the series so far and, after falling in love with Little Blue Truck Leads the Way (the second book), which was given to Nathan as a gift, we found the first and love it equally. Basically, Blue, a little pickup truck finds himself in situations where others are less than nice to him. So he uses his farm charm to teach them lessons and make life better. They're really just good fun with a positive lesson that is not at all preachy or overreaching. We've read both dozens of times and still love them both. 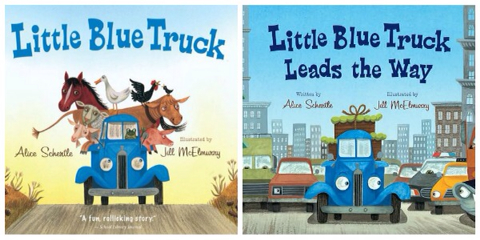 Mike Mulligan and His Steam Shovel by Virginia Lee Burton 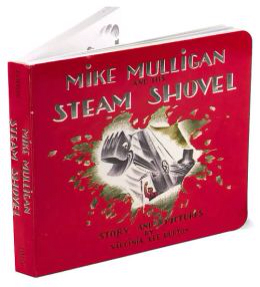 Mike and his steam shovel, Mary Anne, were once the toast of the modernizing world having dug foundations for skyscrapers and channels for canals. However, the world has moved on to diesel and electric shovels and no one wants Mike and Mary Anne to work on their projects. Save for the little town of Popperville, which wants to build a new town hall. Mike makes them an offer they can't refuse. This is actually a pretty old book, published in 1939, but it's commentary on the rush to modernize and leave that which is considered "old" is still pretty timeless. And I love the ending. 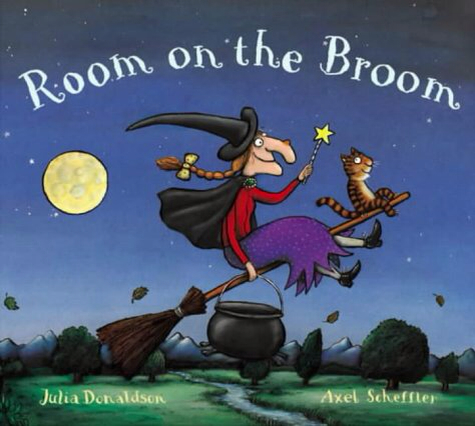 Room on the Broom by Julia Donaldson and Axel Scheffler
This is a Halloween book that Katie just picked up recently by the duo behind The Gruffalo. A witch and her cat are flying along when conditions occur which result in her losing her hat, bow, and wand. During her recovery attempts, she meets new animals who simply ask if there is room on her broom for them. Her willingness to let them aboard pays dividends in the end. Simply fun! And, apparently, it was made into a short animated film released last Christmas (Seriously? Christmas?) starring the voice talents of Gillian Anderson, Simon Pegg, and Timothy Spall. Must find.

One Fish, Two Fish, Red Fish, Blue Fish by Dr. Seuss
I'm a sucker for Dr. Seuss especially ones that have that tongue twister aspect to them. And this one is a classic. I also like all the little tales contained within one larger story.

Fox in Socks by Dr. Seuss
Apparently Theodore "Dr. Seuss" Geisel worked with some institution that deals with speech pathology and audiology to develop the text of this book that takes my above-professed love of tongue twisters and jacks it up to 11. It's such a fun story to read out loud if you can make it through without pulling your hair out. And even more fun to add voices to the two main characters, Mr. Fox and Mr. Knox.

What do you like to read to your kids or what did you enjoy reading as a kid?

For the record, this is not a sponsored post in any way, shape, or form. Just stuff that the kiddo likes and we enjoy as a result.

Oct 1
Wait, wait, wait! Don't run away just because it's Tu(n)esday! I promise, I'm not reviewing music (at least not intentionally)! I actually have a legitimate question for all of you regarding your personal music listening habits! Every. Single. One. Of....
Next Post

Oct 3
Earlier today I saw a picture of myself that I hate. Absolutely loathe. The shock of seeing it made me realize that I need to cut the crap from my diet. But it's never easy. Especially at this time of...

I had a copy of the Mike Mulligan Steam Shovel book as a kid. I had no idea how old the book was.

Cool to see Nathan getting some favorite books on his list, thanks to his proud papa.

And his proud mama.

I'm on the Mike Mulligan train too! It was one of my favorites as a kid. I am a big believer in reading in general. One of my favorite memories of my niece and nephew was at Christmas. I bought them books, which the boy was not terribly interested in until I sat down on the sofa and started reading aloud to his sister. Next thing I know, they are both snuggled up on my lap.

Dutch Sneakers and Flea Keepers by Calef Brown. Awesome book. I read each page with a different style voice and even sung two of the pages:
http://www.amazon.com/Dutch-Sneakers-Flea-Keepers-Stories/dp/061805183X

We also liked a lot of the Dan Yaccarino books. It looks like there are a bunch of new ones on his site:
http://www.danyaccarino.com/ys/booklist.html

Love recommendations and I've never heard of any of those, so thanks!

Gooey goo for chewy chewing!
That's what that Goo-Goose is doing.
Do you choose to chew goo, too, sir?
If, sir, you, sir, choose to chew, sir,
with the Goo-Goose, chew, sir.
Do, sir.

I swear your blog eats my comments :(

I never owned a copy of Mike Mulligan and his Steam Shovel but I would make my mom check it out any time we went to the library and it was there. By far my favorite childhood book.

It was one of Katie's faves growing up as well. And I'd never heard of it until Nathan received a copy.

We LOVE LOVE LOVE Little Blue Truck, but I didn't realize it was part of a series (!!!). If you like that, check out Otis, another farm story with a "moral of the story" that can be felt far beyond the fields. My mom bought Gavin Mike Mulligan and we hate it, so it's hidden on a shelf where Gavin can't find it. Ahhh, the power of parenting when the kids are too young to know better. hahaha. Another favorite book of ours is Goodnight, Goodnight, Construction Site.

I actually picked up Otis the other day based on a recommendation from a woman at Barnes & Noble. Haven't had a chance to read it to him yet, though. So far, Little Blue Truck isn't so much a series as a pairing. Maybe there will be more, who knows? Why didn't you like Mike Mulligan, if I may ask?

Aye yi yi. You know it too well.