I can't believe I've only really posted twice in the last week. I do so well for brief spurts and then it all goes to hell. Oh well. Howsabout I make up for it with a Snippet Wednesday?

Swapping
Currently, the store I so loathe, Best Buy, is having a deal where you can swap in any working smartphone and get an iPhone 5C for $1. Considering we can then purchase an AppleCare plan from the Apple Store to back it up so we don't have to buy a Best Buy phone warranty and it's almost impossible to refuse. Would you do it? Have you done it? Anything I should be looking out for?

Scrobbling
For a while, I was using the Last.fm Scrobbler app as an MP3 player on my iPhone. Why would I do that when I have the Music app built in? Because it was prettier and cooler and synced to my Last.fm account so I could see what music I play and track it all. However, since the iOS 7 update, the Last.fm Scrobbler showed all my iCloud music, even stuff that wasn't downloaded to my device. In Settings on my iPhone, I can hide the iCloud music so it doesn't show in Music, but it would still show in Scrobbler and Last.fm's support account on Twitter said they had no plan to fix it anytime soon. Since I have thousands of tracks in the cloud, it was nearly impossible to browse real vs. imagined music thereby rendering the app unusable. Stupid.

INVDNG
I was recently turned on to the music of INVSN by a local college radio station. I absolutely love the sound of this Swedish alt band and highly recommend them to anyone. Of course, the only weird thing is that I haven't purchased the album in its entirety... yet. I've gotten three tracks and am building the album song by song until I get to a point where it's basically free to download the rest using "Complete My Album" on iTunes. Sure, that might make me cheap, but I've been doing a great job of not buying music (I get almost everything from the library and friends) and I don't want to start now. Slow and steady wins the race, right?

Mangaing
Years ago, I used to read a Manga comic book called Gunsmith Cats about female detectives in Chicago who got in all kinds of crap. While in college, I read some Manga versions of the original Star Wars movies. Last week, I read a Manga book called Tech Jacket written by Robert Kirkman of Invincible and The Walking Dead fame.

Basically, what I'm saying is that I like Manga but really have no idea where to start. Are any of you fans? Would you make a recommendation to a n00b like me?

Sketching
Speaking of art and whatnot, I was recruited at the last second this morning to draw a Happy Boss's Day card for my boss. Nobody realized that this happened to be today until, well, today. So, yeah, very last second. It took me a while, but this is what I came up with... 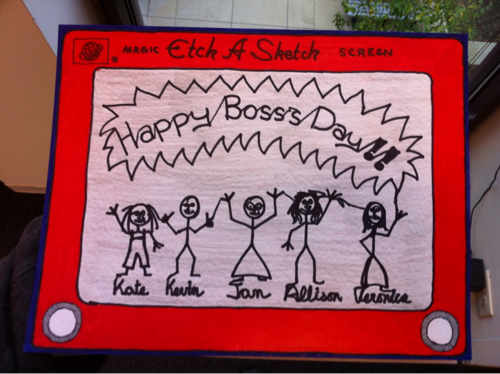 Ringing
The other night, Katie and I were watching Barney & Friends with Nathan when they started singing "Ring Around the Rosie." Normally, not that big a deal. But I've been reading Dan Brown's Inferno and he details the etymology of that song. Did you know it dates back to the Black Plague? I'll break it down for you...

I know Snopes says it's bupkis, but they don't really offer up a more viable explanation for the song, at least not by my estimation. So I'm running with this. Is it really so bad to think that this song has its roots in one of the worst disease outbreaks in history?

I say go for it with the 5c. My wife loves hers. The battery life is very good. The phone is super sturdy (she's dropped hers a few times already) and it's nice and fast (almost as fast as my 5s).

I give additional praise to your Etch-A-Sketch card... so cool.

I guess my big fear right now is everything transferring over. Primarily my stuff in PWSafe. I know I have them in the iCloud but I worry about the app knowing where to look from the new phone build and then I don't have my passwords. I know I'm being paranoid but it would hurt badly. I need to talk myself off the cliff. And thanks on the drawing. Seriously.

Snopes also said that "1, 2 Freddy's coming for you" was purely made up for some movie but ... we know.

Is this where our tax dollars go?! It is very clever, though. How long did it take you?

As to the song, I remember hearing the origin of it long ago, but had forgotten. Did you know that Mother Goose and the like are political rhymes? "Mary, Mary, quite contrary..." refers to Queen Mary...the rest I don't know.

That took me a little over an hour at lunch. As for the nursery rhymes, I knew most came from clearly non-childhood based inspirations. But didn't know specifics really.