Even if you and your significant watch almost all the same TV shows, there will always be differences. Those shows you watch that your significant other does not, much like not always listening to the same music all the time.

It's that way with Katie and I, too. She has some of her shows and I have several of my own.

But since we've had Nathan, it's become more difficult to remain committed to them. We barely have enough time to keep up on our shared shows to be able to watch solo shows.

So I'm making some cuts. Lots of cuts. Even of shows I like. There's just not enough time. I'd rather spend that time with Katie and Nathan.

Late last season, I ditched Arrow. I didn't even finish season one on target.

A few episodes in this summer, Falling Skies fell off my watch list.

Hell on Wheels rolled out with a few episodes left this season.

Marvel's Agents of S.H.I.E.L.D. never gained much traction with either of us.

My TiVo, in an effort to regain some space, deleted three episodes of Sleepy Hollow, making the decision for me.

Up for reconsideration are Mad Men and Justified. The only things playing in their favor are that neither are currently airing and we'll see how things are when they do air. They kinda alternate seasons with the one show I'm continuing to watch. While one is on, the others are not. And I'm not sure if I'm going to want to tune into Almost Human next month despite its killer cast of Karl Urban and Michael Ealy.

The only show I'm currently watching without Katie is The Walking Dead and that's just because, well, zombies. Duh. 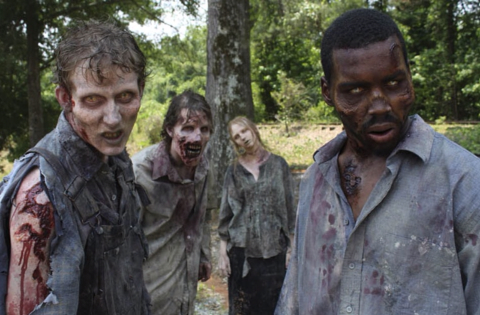 Nathan never ceases to amaze us.

Tonight, after changing his diaper, I threw the rolled up garment over near his Diaper Genie. It was a little too far to get it in there.

Nathan gets up, walks over, grabs the diaper, and proceeds to open the Genie and put the diaper inside.

It may not seem like much to most, but we were sufficiently impressed.

The only TV show I'm actively watching right now is The Walking Dead. And I only started a couple of weeks ago. I'm _almost_ at the end of Season 3 now. It's so awesome watching 2 or 3 episodes in one sitting. Not sure I'm going to like having to wait a week between episodes once I am fully caught up.

I need to caught up on the Walking Dead... I'm very far behind (Season 2). I did start watching Orange Is The New Black. Really good so far.

I've actually watched it both ways always catching it weekly on TV and then doing DVD marathons. Much prefer the latter but would never forego the former.

I've heard good things about Orange. I might have to check it out. Maybe.

I don't have a kid and I still am having trouble finding time to watch my shows. We don't even have cable! Maybe that's a good thing though right?

Matt on the other hand doesn't even watch TV shows. Unless it's something about the universe. He does love his basketball and tennis though.

So next thing to teach Nathan is vacuuming. ;-)

We both wish we didn't watch as much TV but we got too invested in several shows. We've cut a lot but would love to cut more and always hope the TV gods will cancel shows to make the decision easier. BTW, Nathan lives the vacuum cleaner. Doesn't scare him one bit.