(just imagine what next week's freakout is gonna be like)

Baking
Yesterday was my office Christmas cookie exchange. Nearly two dozen people participated and the rules were that you had to bring enough cookies so that everyone participating would get at least two. While I made exactly four dozen cookies, some people went overboard (much to my glee) and we all wound up with upwards of three and four cookies from a handful of participants. I dunno when I'm going to get around to eating them. I may just take them somewhere where they're more needed. That's a lotta sugar.

Worming
Speaking of good sugary stuffs, this and a pot of coffee were my breakfast yesterday... 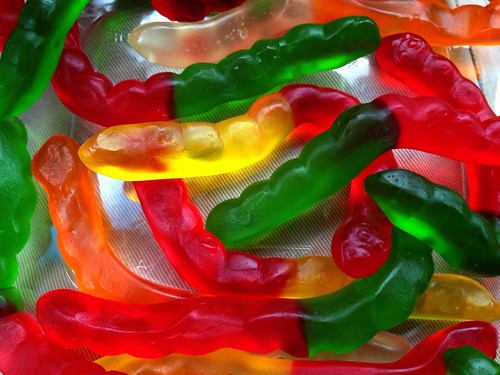 Yup, I had the shakes. Bad.

Waterboarding
The other morning, I was changing Nathan's diapers and, as he's wont to do lately, he was bawling. He hates having his diaper changed and we cannot, for the life of us, figure out why. I mean, c'mon, we're taking off a drenched and very weighted diaper. You think he'd enjoy being dry and slimmer. But he was bawling all the same. At one point, I looked at him and said, "Dude, you're acting like I'm waterboarding you. I'm drying you off! It's the opposite." He didn't get it.

Overpricing
A little more than a month ago, Chicago Bulls legend Michael Jordan put his Chicago-area mansion on the auction block. His asking price? $29 million. It didn't sell. They tried again for, I believe, $22 million. Again, a no-go. Another attempt was made this past week with a starting bid of $13 million. No takers. Mikey, you may be a basketball legend, but nobody's stupid enough to stroke your ego by paying that much for your house. Give it up, man.

Tubing
While I have known that Apple planned to start manufacturing the new Mac Pro (their high-power desktop computer) here in the United States, I had no idea how radical a design turn it had taken. Basically, I saw the headlines about the news but never clicked through to see the images. Woah.

But we all know how that panned out.

Maybe Mr. Nathan gets cold when you remove his diapers? Nah, he probably does think you're waterboarding him.

Who the heck is going to fork over that amount of money for his house?? Dude needs a reality check. Good heavens.

He's been whining for months now so I know it's not environmental cold. But even if he's not wet and cole from the air hitting the wet, he still whines.

Gummy worms for breakfast. I might have done that before. Although I can see why you had the shakes after adding coffee to the mix.

I want a Mac Pro. I don't quite have a need for it, but I won't deny wanting one really bad.

I used a G4 cube back in 2000 at my work. It was cool, although started to develop a crack in the case.

This reminds me of this site I saw sometime ago... a Mac mini Cube mod
http://www.123macmini.com/macminicube/

I heard the cracks were pretty common.