Welcome to yet another fine, but cold, Snippet Wednesday. Bundle up. It's gonna be nasty out there.

Returning
Last night, Katie and I were caught completely off guard by the return of the show Rizzoli & Isles. It had been on hiatus since the August 2013 suicide of costar Lee Thompson Young and I had heard nothing about it returning other than they were going to refilm from scratch and not include Young at all. Turns out they did. Last night's episode was full of Det. Barry Frost. Of course, it appears that an out has been built in that could help explain his future absence. Not sure how that was managed given that this was obviously taped before his suicide. Hmmm. Still wondering just how this is going to happen for sure.

Firing
I was at the store the other day and noticed some new LEGO sets have been released across many of their brands. Star Wars, Marvel Superheroes, DC Superheroes, Chima, etc. The interesting thing I noted was that the Star Wars sets have a new type of gun that has a firing mechanism that actually shoots the little single peg round flat pieces. 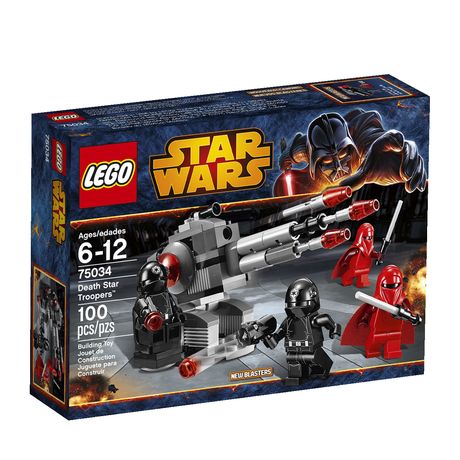 Can you see it in the hands of the Death Star Trooper? Does LEGO really need a firing handgun to distinguish itself and make it even more desired than it already is? Weren't the flick missiles bad enough? I'm having visions of a certain 1980 Boba Fett figure.

Gifting
Did you hear that the gift baskets being given to all Oscar nominees this year is valued in excess of $85,000?? C'mon! Is that really necessary? Actors make enough money as it is. Do they really need these freebies as well? How much good could that money do for the hungry and the destitute? Or how about to help offset the ever-increasing cost of college for the fewer and fewer students who can afford it? How about anything other than giving it as a gift to the already rich?

Dying
This can't be good. I've had my Fitbit Zip for three months and am on my third battery, which today started registering as dying after only three days of use. I contacted Fitbit and they want to swap it out. They suggested I try where I bought it first, which I'm going to do later this afternoon. If that doesn't work, I'm supposed to contact Fitbit again, but they're requiring our original purchase receipt, which, of course, we cannot find. Go fig, eh? Time for a major firmware update.

Stopping
Have any of you tried any of the stop motion filmmaking apps on iOS devices? I'm interested in making some stop motion films and tried one, Stop Motion Cafe, last week. It was easy enough to use and then render the video for playback, but I kept getting an error message each time I tried to export the finished video to my photo album. This means, of course, that the video I spent that time making is worthless. If I can't export it out of the app, I can't share it. I've downloaded two more apps, but haven't tested them yet. Do any of you have any experience with iMotion HD or Stop Motion? How about others? I'd really like to start making some videos.

I wish my fitbit battery lasted longer. I don't want to not count steps while it's charging! And it takes like 3 hours to complete. Mine died last night while I was asleep.

I had no idea that's how much the Oscar gift baskets were valued at- JESUS!

At least hours is rechargeable. Mine uses watch batteries. I don't think they make those rechargeable at all.

What exactly does fitbit do? To me it looks like just a high tech pedometer.

To a degree, yes. But it can also track food, water, calories, distance, weight lost, and stairs depending on the model you use. And it has an app to view all this whereas a pedometer loses everything at the end of the day

What's up with the Fitbit battery? Sounds like something is wrong with the charger, not the battery itself (if you've worked your way through three of them already). Yikes!

The Zip doesn't have a charger. It runs on a watch battery basically and those don't come in a rechargeable variety, sadly. I think it's the one Fitbit that doesn't recharge. I swapped it for a news one and it seems to be working now.

Oscar gift baskets are just wrong. I agree with your points 100%. Do something better than dropping 85K worth of products that a celeb should already be paying for. I know the point of the gift basket is to get a celeb to be vocal about it, but that rarely happens since most celebs I hear about pimping certain products are getting paid in a deal to promote them anywhere.

I didn't realize the Zip didn't have a built in battery. The Fitbit One I have is really great on battery life. I charge the battery once every 10-11 days and the charger is a USB dongle that I just plug into.

I really wish there was a way to charge my Zip.