I'm back! I'm back! And just in time for Snippet Wednesday.

Denying
I know a few of you noticed (and asked... so thanks!), but my blog was down for several days. My blog host, Typepad, suffered what's known as a Distributed Denial of Service (or "DDoS," for short) attack. I'm not going to try to explain it here, so check it out on Wikipedia. But I'd been down since Friday. And, even when many of their sites were restored, mine was not because I use what is known as domain mapping on my blog. Y'see, technically, the address of this blog is kapgar.typepad.com. But I have mapped my own custom domain of www.kapgar.com to redirect here. By "mapping," it changes all the links within my posts and navigation to go to kapgar.com instead of the Typepad-assigned domain. So, even when Typepad blogs were restored (and mine was, but in text-only format), the fact that mapped domains were still down kept people from being able to click any of my links and view full content. Frustrating. But I'm back. Hopefully for the long haul.

As a warning, you'll probably see extra posts from me soon. Gotta play catch up at posting what I wrote and saved as drafts when my blog was down. But they're all on my iPad, which I left in my office. D'oh!

Dumping
Stuff like the DDoS attack and similar downtime of sites I depend upon at work gets you thinking about dumping many services. What do you really need? What can you get away with dumping? How "out there" am I truly on the web? Then you start to think about it... this blog, Twitter, Facebook, Tumblr, Flickr, Google +, Instagram, Soundcloud, Last.fm, YouTube, Vine, Vimeo, Goodreads, Untappd, Pinterest, Foursquare. Sure, I've quit a lot of services over the years, but I've signed up for far more than I've quit. And it might be time to pare down even further. How often do you rethink your online presence?

Streaming
Another one I'm seriously considering dumping, although it's not technically a social media or online "presence," as it were, is Netflix. We quit paying for their mail-in DVD service a couple years ago in favor of their streaming video only. And, to be honest, we really don't use it. I used it last year to catch up on Sons of Anarchy and we used it briefly this year when I knocked out our DirecTV and it became the only option for Nathan to watch some shows. But, other than those instances, and since that outage, we haven't touched it. Plus, dumping it would free up some cash to justify continuing with HBO beyond May 10 when our free trial ends. Hmmmm...

Profiling
Have you seen the new profile page layout in Twitter? There was a lot of bemoaning going on when it was first announced. "It's too much like Facebook!" was the big one. And, it is. But, to be honest, it really doesn't bother me much. Then again, I almost never use Twitter through the webpage so maybe that's why I'm not as screwed up about it. I use third-party apps. Do you like it? Here's my profile page... 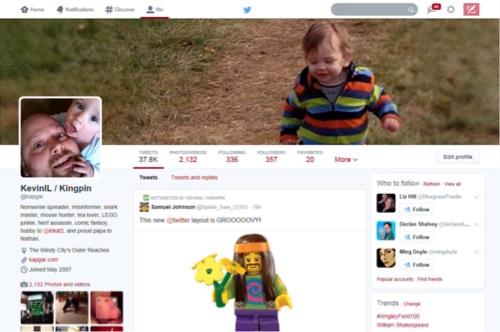 And that's enough for this obviously techie Snippet Wednesday.

Welcome back. Can't wait to read the other posts.

Twitter profile page... I was one of the bemoaners over this change. My beef with it? That Twitter can't be Twitter. It has to try to look like the 1 billion member site of Facebook. While I don't visit the webpage as much as I use mobile clients (75% of Twitter users are mobile only), it's just sad to me to think Twitter can't feel accomplished without feeling like it needs to look more like the Zuckerburg network.

As for all of those services, I don't see a single one that I would get rid of, with the exception of Pinterest, which could be a duplication of what you do on Tumblr, Flickr and Instagram.

At first you said you were dumping Netflix and I went "SAY WHAT??" Then I read above that you would use the monthly fee to continue HBO. Then I said "Nice plan, sir"

Yeah, it looks like Facebook but I am a big fan of this iteration of FB and I'm sure they're due for another change so this look will soon belong solely to Twitter. And yes, it seemed like a decent plan to allow keeping HBO. We're liking HBO a lot.

I wish we had HBO. As I mentioned in my last podcast, we are staying with Comcast for a bit longer, but they now have a deal where you can get Blast internet and HBO for $50 a month for the first 6 months. We might just do that so I can use HBO Go on the iPad and Apple TV.

HBO is my vote. Great programming on that channel and the HBO Go app is crazy awesome.

I've been using the Go app a lot lately. It might get the edge.

Ugh, sucks that you were caught up in a DDoS of your provider. Glad all is sorted now.

I find these days that I really don't have time to be active everywhere. So I limit myself to Twitter, Flickr, last.fm, and blogs.

I kinda like the new profile pages. Primarily because they look great. But also I'm not on Facebook so can't tell if it resembles it. Also I never ever go to the Twitter website. In fact until last week I don't think I'd visited in years.

There's rarely a reason to have to visit Twitter.com.