Hey you! Yeah, you! Come over here. I got something for ya. I think you're gonna like it. Yeah, you will. Trust me. Would I lie to you? C'mon, take a look. You know you wanna.

Crossing
For those of you who have multiple social media accounts and are bloggers and whatnot, do you find yourself doing crossover messaging? What I mean is, do you post the same stuff in multiple places in hopes of hitting up a new audience or are you afraid that it will just be overkill because you have basically the same audiences in all places? I'm asking because...

Thomasexting
I posted this on Facebook yesterday. Or the day before. I'm not sure. Anyway, I said that you can tell you're a parent of a toddler when your text messages back and forth with your spouse is inspired by the cartoon Thomas & Friends. No, I'm not kidding. 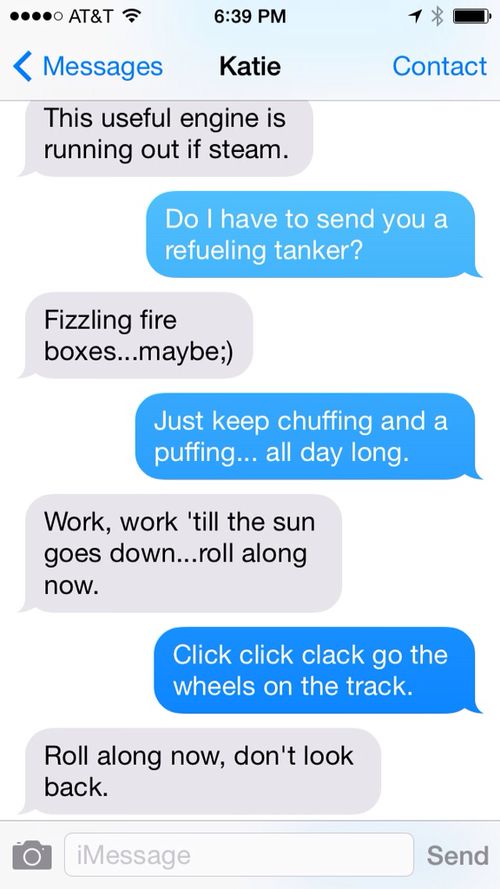 Doing
I heard Chris Isaak's "Baby Did A Bad Bad Thing" on the radio this afternoon. I love the song and, while I know it was basically the theme for Stanley Kubrick's Eyes Wide Shut, couldn't you also see it being used in a promotional video for Game of Thrones? Just a big video montage of all the evil things the characters have done followed by close ups of their faces? I'd love to see that. Maybe I should try my hand at video editing again. How would I rip snippets of video from DVDs for this sort of project?

Walking
Speaking of TV, did you all see the season finale of The Walking Dead? No spoilers here, don't worry. I just want to say that Avitable brought up an interesting point on his Facebook page that, in the final scene, couldn't you imagine Rick doing the ol' David Caruso sunglasses routine with that line of his? Pretty funny to think about.

Clubbing
Today, my place of employment celebrated National Walking Day by inviting us to wear our tennis shoes to work. Those of us who did were entered in a contest to win new shoes. I could definitely use those. But we also got information about a monthlong walking club with more prizes. I did their fitness program last year, which helped keep me motivated to work out (when I wasn't nursing an injured ankle and knee). But to do it again combined with my ever increasing walking due to owning a Fitbit? Oh heck yeah! LET'S DO THIS!

In the immortal words of Patches O'Houlihan, "Bye bye."

I definitely cross post (you probably have noticed), but not always. Depends what I'm posting and I don't always have the same audience. It varies from platform to platform. Plus depends on how much I'm wiling to share.

That is so cool that your work place is celebrating National Walking Day! I think more workplaces need to encourage their staff to be and stay healthy, and should even provide certain services.

I suck at using my FitBit. I have forgotten to wear it twice now and that brings my numbers down quite a bit even though I would have walked or done some sort of activity that day. While it has encouraged me (partially - the other being that I've gained weight and my clothes don't fit), I don't think it's been my main push to keep getting into shape. I still like it for counting steps and calories. Well, when I remember to wear it that is.

I stand corrected. My main motivations for getting fit are Katie and Nathan while my Fitbit serves as my taskmaster.

The fitness trackers Katie and I have been using since late November to track our steps and distance walked and calories burned. www.fitbit.com.

Ooo, I hope you win the shoes!

Funny you bring up cross posting on platforms. I try not to. Only because I see a lot of bloggers post the exact same thing on every platform with the same followers and wonder what the hell the point is. You are not doing that. That would be like if you posted that screenshot on Twitter, Insta, Facebook and if it was the only thing in this post :)

I did not win the shoes. Boooooo. I've cross posted before but mostly because my blog allows me the space to elaborate where most social media does not (or I prefer it not. I hate long posts on Facebook).

I wish I could automate the process a little better. It is to a minor degree.