My review of Nick Offerman's Paddle Your Own Canoe as it appears on Goodreads (2 of 5 stars):

Writing this review makes me sad. Truly sad. You see, I'm a big fan of Nick Offerman in his most readily identifiable role as Ron Swanson, Director of the City of Pawnee's Parks and Recreation Department, in the NBC sitcom Parks & Recreation. I look forward to hearing what witticism will emerge from behind his Sam Elliott-esque moustache and then seeing it endlessly retweeted in my Twitter feed for the next week. 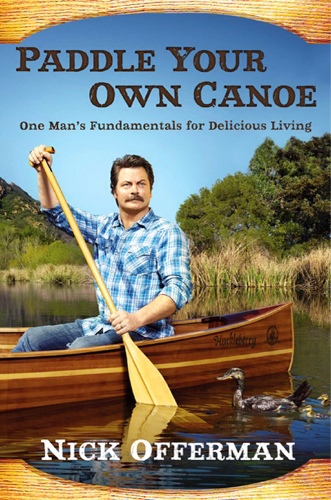 When I saw that he had written a book, I really expected that droll, yet witty, persona to come out as he shares his views on life based on his upbringing in rural Illinois and his ascension through his life on stage and then the small and big screens. I was very much looking forward to it and happy as a pig in slop when I received it this past Christmas.

Yeah, his wit was there. He was mostly funny in his book, I suppose. Well, what I read of it anyway. Y'see, it turns out that Ron Swanson doesn't quite translate as well in long written form. He's great for quips and brief, yet oddly inspiring, mini speeches to his fellow P&R characters like Leslie Knope, April Ludgate, Tom Haverford, et al. But as a 300+ page book? Not so much.

A while back, I remember reading something from Elmore Leonard in which he stressed that if you can use one word instead of five, opt for brevity. Another time, during a speaking engagement, David Sedaris told us that the death of good writing is when a writer goes back and tries too hard to embellish their own words with new, bigger, and fancier ones. Kinda akin to thesaurus writing, I'd say. Insofar as I can tell, Offerman violated both of these guidelines. Handily. I just couldn't get over how overwrought his language was and how many times he seemed to refer to a word-of-the-day desk calendar while writing. It's almost as though he was taking his University of Illinois drama degree and shoving it down my throat.

I'm sorry, Ron, er, Nick. I love you on Parks & Recreation, but I just could not get past the halfway point of your book. While it may not be fair to review a book I didn't finish, I think it's important to share this fact with other readers.

And if this review seems a bit heavy handed and overwrought and embellished with instances of anti-brevity, well, you know who to blame. It's contagious.

Wait, what's another word for "contagious"?

Thesaurus writing was the one of the many banes of my existence when I worked as a writing tutor. I either dealt with people who put zero effort into writing or those that put too much effort into it, and it killed me every time.

Oh that is unfortunate. I saw that book in passing and thought it might be funny. At the same time though, an actor does not necessarily make a good writer. Writing is hard yo.

However, your review is great! By the way, did you ever read Tina Fey's book (Bossypants)? That one was good (at least I thought so).

Many of the reviews of Paddle on Goodreads reference how they were expecting it to be more like Bossypants, which most seemed to enjoy. I may read it sometime but, for now, I'm going back to more historical stuff. I have a bio of President Garfield and another about George Washington's spy network sitting in Nook that I've been meaning to read for some time now. Meaty historical stuff. Right up my alley.