Lean back, kick up your feet, and settle in. It's Snippet Wednesday!

Archie'd
For us comic book buffs, today was the big day... the day when Archie Andrews, our favorite red-headed do-gooder makes the ultimate sacrifice and is killed saving a friend.

Sure, it's only one storyline that's affected (Life with Archie), but it's still a pretty big deal. The man will die like he lived, for his friends.

Released
I saw an interesting bit online today. A coroner's van had a door malfunction allowing it to open and a gurnee with a corpse rolled out into traffic. Take a moment and imagine driving behind that one.

Spammed
Marty and I still have no idea how it happened, but I received a spam email from a strange email address with his name as a return sender ID. 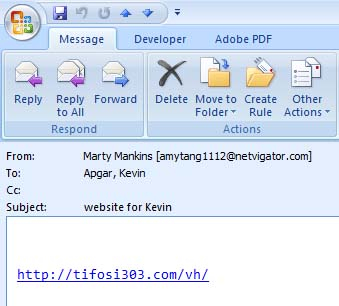 Normally not that big a deal, but this was sent to my work email account, an account from which I've never sent him anything. And he's not the first. I've had this happen from a handful of my other friends who I've never sent messages to from my work account. Weird.

Duck'd
Nathan has recently taken to Donald Duck when watching The Mickey Mouse Clubhouse. He gets pretty excited saying "DAH-Duh" when he sees him on screen. So we searched a while and finally found a nice Donald Duck stuffed animal and it's just not going over as expected. In fact, few of his toys really do.

He liked it at first as evidence by this photo. But now he just pushes it away or leaves it behind. The Sid the Science Kid plushes from Christmas? He drags them around once in a blue moon. I think the only thing he really pays any regular attention to is his train table. Are all kids like this or do most glom onto something pretty readily? We're not sure what to make of this.

Monarch'd
I saw this beautiful monarch butterfly on my walk today.

Sadly, after getting close enough to take this picture and getting zero response, I'm left to believe it was dead. Still beautiful, even in death.

Jul 15
Yesterday, I visited a place called 2nd & Charles. They are a reseller of used items such as CDs, DVDs, VHS, vinyl, video games, toys, books, comics, etc. They also sell some new stuff as well. Anyway, I was there...
Next Post

Jul 17
Apple keeps on announcing new features for iOS. In fact, just last month they announced the impending release of iOS 8. It's taken me a while to get around to actually reading what all is included and, to be honest,...

Yeah, that spam with my name attached to Amy Tang email address. Puzzling, that's for sure. Maybe something to do with an address book. But how spam people have access to an address book. And if none of us amateur spammers were emailed from your work account....

Ava is the same way with her toys. We tried rotating them in and out in hopes she would take to one or two that she really liked but each day it's something different. The only real constant is her kitchen....she loves that thing. Unfortunately she can't really carry that one around with her.

Very strange how spammers work. And thanks on the Nathan photo.

A few years ago spammers had done the same thing, using my friend's name, who had passed away two weeks before. It freaked a bunch of us out, including his family. These spammers are the scum of the earth.