So this happened today... 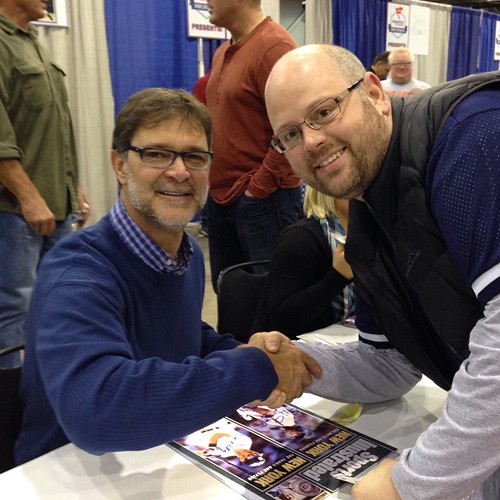 I have my brother-in-law, Scott, and sister-in-law, Becca, as well as my niece, Ava, to thank for giving me the opportunity to finally meet my boyhood and teenagehood (?) hero Don Mattingly, Hall of Fame firstbaseman for the New York Yankees. I've been a fan since 1985 and have come within feet of meeting him several times in the past only to be thwarted by timing, or lack thereof.

Today, I got to meet him and have him sign a baseball and got a photo taken with him. It would have cost too much to have him sign my jersey so I'll just have to continue stalking him "in the wild," as it were.

This wasn't the only cool thing to happen at this sports memorabilia show.

When Katie, Nathan, and I got there, we saw Dwier Brown who played Kevin Costner's father, John Kinsella, in the classic film Field of Dreams. I talked to him for a few minutes and he signed a copy of his book If You Build It. We also lamented how shameful it was that his costar (Kevin something, he couldn't remember his last name) never amounted to much in Hollywood. All that talent... Ha! ;-)

Then we met Dennis "Bose" Biddle and Ray "Boo Boy" Knox of the Chicago American Giants of the Negro Leagues. They were so cool and were teasing with Nathan and signed some stuff and took this picture with Katie and Nathan. 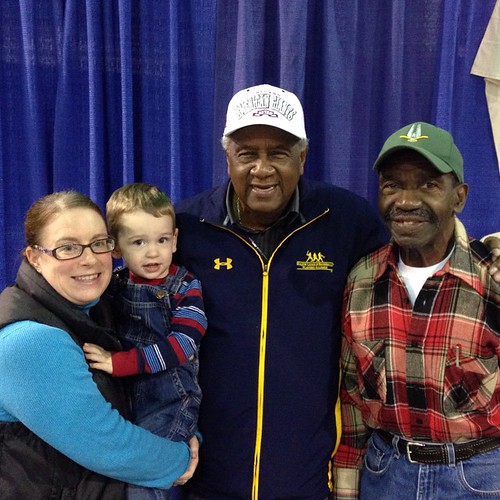 Finally, I met Don Mattingly. The first time through the line, I threw down the handwritten letter he sent me as congratulations on attaining the rank of Eagle Scout back in 1989 that my dad requested from him. I said, "26 years ago, you sent this to me on my dad's behest as congratulations. Today, I finally get to meet you in person to get my own signature." He told me he thought that was pretty cool and he actually read the letter.

I didn't ask him for a photo the first time because they really seemed to be rushing people through the line and I didn't see anyone else get a photo. But Becca got me in the line a second time with her (long story) and, this time, we each got pictures with him. You can see the result above.

I don't really buy much in the way of memorabilia at sports shows like I used to, but I did get a few things this go round. 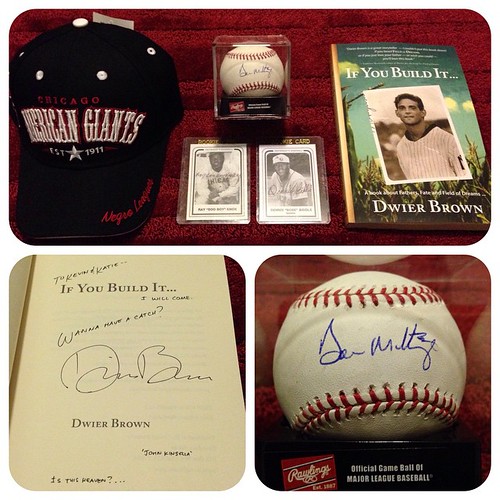 From left to right along the top: a Chicago American Giants hat, Don Mattingly signed baseball, signed cards from Biddle and Knox, and my copy of Dwier's book. The two pictures below that show detail on the Dwier and Mattingly signatures.

A very cool day. Thank you to Scott, Becca, and Ava. We had fun.

Nov 22
A week ago, I had my mind completely made up against using Wordpress. I even have a blog post saved in my draft folder justifying my decision. Then something unexpected happened. The IT gods at work gave me unfettered access...
Next Post

Nov 24
Last week's Macro Monday yielded some interesting, and very nearly correct, guesses. None that were 100% correct, but very close. For example, I can definitely see a paintbrush or an aglet when I look at this... However, it is actually...

That book should have been signed to me, you turkey!! I'm the "Field of Dreams" fan!! You look like a little kid in the candy store, Kevin!

Because you're the ONLY person in the world who loves that movie, right? ;-)

That is pretty dang cool. :)

On mine and my SiL's behalf, thank you!