Funny how things get all coincidental on you, isn't it?

Yesterday, I post about how sentimental I get over the Toy Story movies because of my childhood of anthropomorphising my toys. That same day, Disney announces the name of the next Star Wars movie (relevant because my SW figures were ones I heavily latched onto), Disney/Pixar announces that they will release Toy Story 4 in 2017, and little green army men get inducted into the Toy Hall of Fame. ALL ON THE SAME DAY!

But also of note is an article Katie found online the night before last positing a rather brilliant theory about Sid, the criminally malicious next door neighbor to Andy in the original Toy Story film.

E!online correspondent Jenna Mullins takes a moment to remind us who Sid was. While I find it hard to forget him, he did only really appear in one film of the trilogy. Or did he?

While it didn't escape my notice, many of you may not realize that Sid may or may not have had a cameo in Toy Story 3 as the garbageman who almost throws away all the other toys while Woody is trying to save them. He has the same shirt and reckless attitude. I do believe he was also at the end of the movie in the dump, but I could be wrong. So what, though, even if it is him, how is that a big deal?

According to a Reddit user who happens to be a garbageman, their ilk are in a position where they find lots of wonderful discarded items. You know the old saying, "one man's trash is another man's treasure," right? Mullins, as a result, theorizes that maybe Sid took a job as a garbageman because it was his way of "doing right" by the toys he had wronged as a child. He could save toys that were discarded by others as a way of salvaging his own soul.

Disney/Pixar haven't commented. Heck, they haven't even confirmed that this is, in fact, Sid. But I would like to think this was wholly intentional. Pixar writers are too smart to not have thought this out. Everything means something in those movies.

If this is the case, I'd forgive Sid.

Nov 6
When you were a kid, did you anthropomorphise your toys? I did in a serious way. My toys had personalities and behavior quirks and, for better and worse, emotions. I could never get rid of toys because it would hurt... 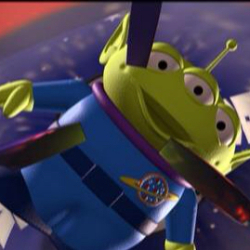 Nov 8
A few years back, I was part of a local library foundation whose goal was to fundraise the money necessary to allow our library to buy out another building to move into greatly expanding their available square footage. Things fell...

Now I need to go back and rewatch the Toy Story movies. I was already thinking of doing that when I read about the Toy Story 4 sequel is a go.

Hmmmmm another Toy Story movie? I always wonder why they keep making so many of these types of movies. Can they not come up with a different story line, characters, etc.? Don't get me wrong, the Toy Story movies are great, but come on. A little creativity here.

I gotta watch them again, too.

I worry about them all. I'll give them a chance but still fearful.

Toy Story 4 is something I'm dying to see... but am dreading as well. The first three films were so perfect... there's nowhere to go but down, right?

I both dread and look forward to it as well. It's Toy Story and they've managed to do right by it so far even with more than a decade between 2 and 3. Plus they set themselves up for a new generation with the new girl who owns them all so we don't have to worry about it being about Andy at 30. And the shorts they've done have been great. I'm cautiously optimistic.

Toy Story 3 was so very good, please do a good job Pixar. Usually I'm one to moan about sequels and prefer originality. But for Toy Story I'll make an exception.

They have done good by us so far.