Did you look at the post title above and wonder, "What the heck is 'TVOTR'?" About five years ago, I was in that camp as well.

I have since, however, been very well indoctrinated into the awesomeness that is TV on the Radio via the albums Return to Cookie Mountain (2006), Dear Science (2009), and Nine Types of Light (2011) as well as seeing them headline an evening at the Pitchfork Music Festival in 2011. Well indoctrinated, indeed.

[Quick note: No, this is not that "supergroup" comprised of TV and movie stars. They're called Band from TV.] 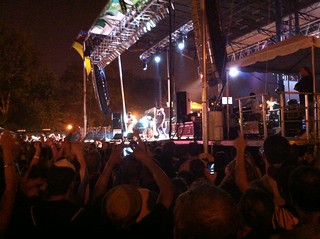 I am happy to announce that their latest album, Seeds, dropped today. Well, iTunes gave it to me Sunday night, but today was the official release date. Not sure how that happened, but I won't complain because it did not arrive on my iPhone illegally. Ha-ha, RIAA!

Overall, it's a solid album that I am thoroughly enjoying. Tracks like "Happy Idiot" and "Lazzeray" make me my own type of happy idiot harkening back to some of their faster-paced songs like "Wolf Like Me." But the album finds its balance in the cosmic ethereality of tracks like "Test Pilot."

A reviewer tweeted that he thought the album sounded too "normal." If you're looking for some evolutionary leap in their sound, sorry, it's not here. But if you crave the warm embrace of Cookie Mountain, welcome home, my friend.

I'm off to give it about my fourth or fifth listen.

Nov 17
As predicted, parents were all over last week's Macro Monday challenge photo. This... ...was the chewed-up top to a sippy cup. Care to guess on this week's challenge photo? And, yes, I did reduce the display size of photos here...
Next Post

Nov 19
Hey People Magazine! When are you going to make me the cover boy for your Sexiest Men Alive edition? I can be sexy. Really. That Hemsworth hack ain't got nothing on this Thor! Oh well. Maybe next year.

I remember you posting this on Twitter or Instagram and now I FINALLY know what the heck you were talking about!

And you should check them out, too.