I'm curious to see if I can circle this one back around. Bear with me, will ya?

Did you get out and vote today? I'm not positive about it, but I feel pretty certain that each state in the Union had a General Election. That is how it works, right? I guess I don't pay attention to all other states since I can't vote in their elections.

Here in Illinois, it was time to elect a new Governor. We had three choices, only two of which actually had any hope of getting elected... Democratic incumbent Pat Quinn and Republican challenger Bruce Rauner. Quinn hasn't really done much to pull Illinois out of the doldrums these last four years and I can't see how Rauner can live up to his promises and do what Quinn hasn't been able to. Basically, I look at it as each of them has their own Santa Sack of Issues, which means, like always, I'm voting (or "voted" as the case may be) for the lesser of two evils.

Why is voting always like that? I just don't get excited by any candidate anymore. I especially cannot get behind a single party. My ballot today was a pretty evenly split collection of votes for Republicans and Democrats and I think I even counted a Libertarian vote in there somewhere. That's so Ron Swanson of me.

Speaking of issues, does anyone think that Taylor Swift's pulling of all her albums and singles from Spotify might just be the start of a movement amongst musicians against the minimalist royalties they gain from streaming services? Or will she come running back?

In case you don't know, when an artist's music shows up on streaming music services like Spotify, they do get paid. But it's a pittance compared to when they actually sell an album like they do through iTunes. On Monday, Her Swiftness pulled all her albums from Spotify. Although she did not actually say it, the assumption is that she's trying to maximize earnings and push for platinum status for her latest release 1989. You can't go platinum with streaming and there hasn't been a single platinum album released this calendar year (the Frozen soundtrack went platinum this year, but it was a 2013 release).

When it comes to the lack of platinum albums this year, I think that can be attributed to an overall lack of quality music releases. I'm not saying they're all bad. There have been some good independent albums released this year that just won't have the market saturation of a Taylor Swift. But, I'm having trouble, based on what I've listened to so far, picking one or two truly standout albums. The sort of stuff that could top my YEBO: Albums list, yanno? Picking my top albums in the last few years was tough because I had so many to choose from. This year, it will be difficult to think of even one that deserves it.

I think the first potential contender is coming out next week and that would be Foo Fighters' Sonic Highways. I've heard a few of the tracks and they're pretty solid.

Also coming out next week is Pink Floyd's The Endless River. Wait, what? Pink Floyd with a new studio album? They haven't done that since 1994's The Division Bell and, as I cannot remember a single noteworthy track from that set, I don't tend to count it. That makes 1987's A Momentary Lapse of Reason the last Pink Floyd album I gave a darn about.

I've got a strange relationship with Pink Floyd. I loved them for several years and owned copies of their albums on CD and vinyl (I think I still have a limited pressing of The Wall on vinyl at home). But I kinda gave up on them in 1997. In late 1996, I very briefly dated a girl and then she ended it. I was kinda bummed and sat in my dorm room with the lights out listening to Floyd. She came over to talk and couldn't stand what I was playing and turned it off. I haven't listened to them since. Cold turkey, baby. Just like a bad habit. I even change the station when they come on the radio.

I do that a lot these days... changing radio stations. It needs to stop. But the only way that can happen is to have more good music released. I wish I could have voted for that this morning. Voted for more quality music.

And BAM! Full circle, yo! 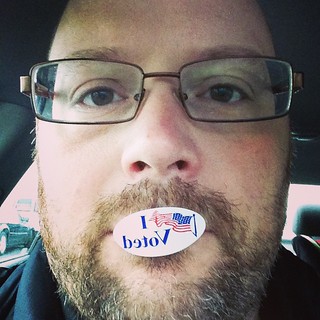 Nov 3
Last week's Macro Monday challenge photo was an easy one. Lots of people got it. LOTS. I'm not even going to try to list them all. I expect an equal number of correct answers this go round as well. This......
Next Post

Nov 5
Wow! It is such a fantastic time to be a fan of Cleveland sports! The Indians make the postseason by winning a one-game playoff against the dreaded New York Yankees and, due to their inspired play and sudden surge in...

Oh god the elections. I'm so depressed. So very depressed. We might have a recount for the senate run in our state I'M SO DEPRESSED.

I can't stand Taylor Swift. If she pulled her album from streaming music just to get more money or some award or whatever, it just makes me despise her more. I hope streaming music doesn't go by the wayside because I really do prefer it to the radio (which has nothing except for NPR).

Why is everyone and everything desperately trying to limit our choices???

I wish I could listen to streaming radio. But they're all blocked out at work and I just don't care by the time I get home.

Elections this year were a bummer for me as well. Granted, I got out and voted because I like to vote, even if there's not any worthwhile candidates that I can embrace and be happy if they get elected. That hasn't happened for years, which is sad.

As for the Taylor Swift and Spotify yank, I don't blame her. I'm not a huge streaming fan. I like my music local and in a file I can see and backup. So as much as I don't like her music, I can't blame her as an artist wanting to maximize sales, which she did (and beat Eminem's 12 year record for sales in one week).

As for albums this year, lackluster on several levels. There's a few that came out that I really like so far that will end up on my Best of list. Next week, we have Foo Fighters, which I'm going to say will be pretty close to the top.

Pink Floyd... I am excited to hear this new album, even if all but one song is instrumental (the last song has vocals). I liked The Division Bell a lot and there were several stand out tracks that I played a lot, "What Do You Want From Me" and "Keep Talking" being two of them.

I don't remember those Floyd songs at all. As for my albums, shortly after I published this post, I remembered St. Vincent's new album which, if Foo doesn't completely rock, will be my number one.