I hate to beat on a dead horse. Actually, that horse is so beaten dead right now, it's practically glue. But I have to ask what your opinion is on the New England Patriots and DeflateGate. Do you have an opinion?

Personally, if this were a one-time thing and the Patriots weren't already a team under a microscope, I wouldn't have much of a problem. Sure, I'd be ticked off that someone did it and won a game that may or may not have been assisted by this transgression. But athletes, coaches, and teams cheat all the time. I doubt there's a single game or team that hasn't stretched the rules a little bit. It happens.

However, this is the second major scandal of the Bill Belichick-Tom Brady era in New England. And they're both proven cheating episodes instead of just alleged. The first was SpyGate, which came to light in 2007 but with instances of it dating back to 2000.

With this proven history of being willing to break and bend the rules, I really think the NFL needs to come down hard on Belichick and Brady. I just don't know what that "come down hard" should be. You can't give the Super Bowl's AFC seed to the Colts saying that they would have won if the Patriots hadn't deflated 11 of 12 balls to 2 psi under the minimum allowable amount. The Patriots clobbered the Colts 45-7 and even I, in my undying hatred of the Patriots, can't reasonably say that it was all due to ball deflation. The Patriots outplayed the Colts. The Colts didn't even show up. I truly believe the Patriots still would have won the game ultimately.

So what can or should NFL Commissioner Roger Goodell do as punishment? A monetary fine is nothing. No point in even bothering as both Belichick and Brady, and the New England Patriots as a whole, have so much money that any fine is chump change. Losing draft picks can hurt, but it's gotta be more than one. Have them lose a first and second rounder for the next two years. That might not even make them wince too much.

I just don't know what to do or what should be done. But something needs to happen. Something decisive. Something swift. Something that will make them hurt.

God, I hate the Patriots. And I hate that they're back in the Super Bowl.

Speaking of Super Bowl, have you seen this pre-release Super Bowl commercial for Bud Light? I totally want to play human PacMan.

Jan 22
Despite, at the time, only being a quarter of the way through the book, this happened last night... Gone Girl... What. The. Fuck. Gotta follow that with some Parks and Recreation to ease my mind before I attempt sleep.— KevinIL... 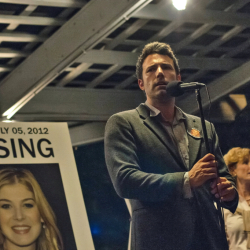 I don't care much about football (as you know), but I'm sick and tired of them cheating even though I do root for the Pats when they get this far only because it's a Boston team and well, Boston is my forever first home here in the US.

At the same time though, I think the NFL has a lot more serious issues to address, which they haven't been, namely domestic abuse, rape (i.e. Roethlisberger), and the like. Cheating sucks, I'm with you on that, but when as a league you keep giving big name players a pass because teams need them even though they are breaking the law? There's a bigger problem.

The NFL is riddled with problems. I agree. And they need to start acting very freaking soon.

First off, I think the entire NFL is having some issues that need to be addressed. For a non-profit group that rakes in millions of dollars, I think some changes are needed and have been needed for some time now.

The Patriots have been a dynasty for years now, win or lose. They always find themselves at the top or pretty near most seasons. So when things get tough on them, they appear to have some tricks up their sleeves. So while DeflateGate is a bit on the overused side of things, I think it's an issue that deserves an investigation.

Although I've never seen so much coverage on deflated balls ever. Makes me snicker.

And I cannot wait for that live action Pac-man commercial.

It's time for the Pats to fade into obscurity for a bit.