It's funny how fickle we are about the cost of fuel. I'd assume this fickleness ("fickleality"?) extends to countries outside the U.S., but I cannot say for sure.

Six months ago, gas in the U.S. was at record highs averaging nearly $4.50 per gallon in some cities. It has since dropped. Precipitously. I, for one (and Katie, for two), were ecstatic to watch the price plummet. It has gotten as low as $1.75 per gallon, the lowest price point in five or six years by most accounts.

But, as oil prices are wont to do, there has been some elasticity to pricing at the pump. It has gone up a few cents and back down a few cents. Over the weekend, it bumped back up at stations near our house to as high as $2.25 per gallon. Yesterday, I noticed some of these increased costs starting to settle back down. The Sam's Club near our house was selling it for $1.89.

While on the phone with her, Katie told me she'd be stopping at Sam's because the price at stations near where she works were up at $2.08.

We both sighed with disgust.

At $2.08 per gallon like we're being ripped off when it was north of four dollars only half a year ago if not more recently than that!

We humans are a fickle bunch.

Jan 28
One of my favorite accounts on Twitter to read on a regular basis is The Cancel Bear. The person behind this account closely follows ratings on the Big 5 U.S. TV broadcast networks (ABC, CBS, NBC, Fox, and CW) and...
Next Post

Jan 30
When you're the parent of a child who is not quite of age to watch the same stuff that mommy and daddy might otherwise prefer to watch, you get stuck watching a lot of kids shows or movies. A lot... 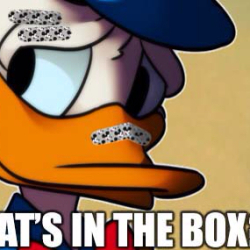 Personally, I think from an economic point of view, gas shouldn't be anymore than $2.05 a gallon anywhere. It's $1.71 a gal here at the gas station a few blocks from our house (Shell station). While I like it less than $2 a gallon, I really don't see any reason why it should be $3 or $4 a gallon anymore. Except for those who feel oil companies needs to make record profits.

Therein lies the problem... those who want the record profits have so much sway in our government that they will get what they want. I'm still waiting for the other shoe to drop on this gas price decline. Something's gotta give.

So apparently (from what I keep reading in the news and hearing on NPR) it's actually bad for the global economy that gas is so low. But to be honest with you...uh screw everyone else. I want it to stay low.

I have heard that, too, but I think they're blowing smoke up our asses. How could low gas do that? Delivery costs go down so product prices should follow suit. Travel costs (should) decline. Consumer has more money to spend on more stuff. How's that bad??

Americans don't realise how good you have it. Up until the price drops we were regularly paying ~$1.45 per litre. Even at a one-for-one exchange rate and approximating to four litres per gallon, that works out at about $5.80/gallon. Europe is even more expensive...

I'm curious, though, how often do you refill your gas tank?