Despite, at the time, only being a quarter of the way through the book, this happened last night...

Gone Girl... What. The. Fuck. Gotta follow that with some Parks and Recreation to ease my mind before I attempt sleep.

Now, a good 18 hours after finishing the movie, I stand by that assessment. Gone Girl is one serious mind fuck of a movie. Sorry for the f-bomb detonation, but there really is no better way to say it. It starts as a simple missing persons movie with the police investigative focus, as expected, squarely on the husband (Ben Affleck) of missing wife Amy (Rosamund Pike). Then it becomes anything but. Just... out there. Way twisted. Katie and I looked at each other after it was all over in stunned disbelief. 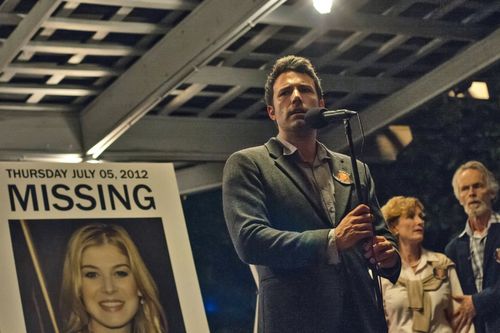 It was well done, don't get me wrong. Great writing. Fantastic acting. Nice subtle musical accompaniment. And it keeps you really engaged. At two hours and 24 minutes, Katie and I thought we'd be splitting this up over two nights, but we kept going. I think we both really wanted to see how it ended and didn't want to wait.

You might be asking how, though, I could watch the movie without first finishing the book? The movie came in from the library and we only had it for a week, so we had to watch it now. While the book is good, finding time to read a physical book hasn't been easy. I'm so focused on my step goal that I was doing that during lunch breaks at work instead of reading. There really was no time for me to finish the book first is what I'm saying.

Luckily I have this amazing ability to separate book and movie in terms of their stories. I can watch before I read and the book still won't be spoiled. Sure, I know what's going to happen. But my brain is so engaged as I read even when I know the outcome because I want to see the differences in how each storyline plays out. What was left out of one and added to the other... that sort of thing. I don't know how I do it, but I do.

However, in a minor twist, I cannot separate the book and movie in terms of characters, and that becomes a huge benefit to me as I read. After watching the movie, I have faces to go with characters in the book as I read. Now, Nick looks like Ben Affleck, Boney looks like Kim Dickens, etc. It's great and helps me keep actions in the book all straightened out mentally because I can see who is doing what.

Honestly, I much prefer watching before reading for this reason specifically.

I digress. Below this point is a big spoiler! Stop reading now if you haven't seen the movie or read the book and plan to. Otherwise, by all means, keep reading!

My confusion lies in the end when Amy (Pike) begins her set up of Desi (Neil Patrick Harris). She starts digging into her wrists to make it looks like she's been bound. She does the nasty to herself with a wine bottle to make her female parts look like she's been raped. She spills red wine on her night gown to look like vaginal blood. And she even ties a cord to her wrist to make it look, for the security camera that's recording live, like she escaped from bondage.

But what about all that other security camera footage of the cabin? What about her being brought in, clearly of her own freewill, by Desi? Howsabout all the recorded footage from the couple of weeks that she was there where she played very cozy roommate with him? I know there are no cameras at all points in the house, but there were so many of them that she had to be recorded several times daily. There is no way she is living in that house for a couple weeks, going on the deck, out to the dock, etc., without being recorded. Why wouldn't that have been seen? A forensic analyst had to look at it all when they examined the uber-bloody crime scene. With how careful he is, there's no way Desi deleted it all or gave her access to be able to see it on his computers. And, since it's all digital, it's not like he's recording over old tapes with new footage. It's all on a hard drive somewhere.

Then there are the timestamps on the video that would show a multi-hour difference between when she was recorded playing escapee and when a coroner would have placed Desi's time of death based on liver temp, corroborated by Amy's testimony. As I recall, he was gone for a while taking care of business (I assume work) while she plotted it all out. Even using a range of hours for when he was killed, her video timestamp had to fall well before it.

I know the authorities were just-oh-so happy to have her back that they shut down Boney's attempts to question her about everything with Nick and her setup of him, but even the world's worst cop would have known that all evidence at the cabin needed to be examined to verify her story. Desi's body temp. The video footage. The question of how she got the box cutter. All. Of. It. Even if not right away, they would have to conduct a full investigation before they could close the case entirely.

Lastly, why didn't they clean Desi's blood off her at the hospital? What's that all about?

Just a few holes I noticed in an otherwise good movie. One that's still got me emotionally scarred.

Jan 21
Hey all, I've got a couple of questions I'd like to throw your way if you don't mind. 1. With the Super Bowl a mere week and a half away, Katie and I need to plan our team-themed dinner for...
Next Post

Jan 23
I hate to beat on a dead horse. Actually, that horse is so beaten dead right now, it's practically glue. But I have to ask what your opinion is on the New England Patriots and DeflateGate. Do you have an...

Thanks for the spoiler alert! I haven't watched the movie yet nor read the book so I would have kept reading. I was on the fence on whether or not to watch the movie, but you've definitely settled it - I'm going to watch it (when available on one of my streaming accounts).

P.S. I wish we lived closer so I could come over and watch movies with you and Katie since Matt is not into movies (SO rare he'd watch one with me). Plus I could hang out with ridiculously adorable Sir Nathan.

Honestly buddy, I read the book and had it figured out in the first chapter.....then absolutely hated every second of the book. Plus, once I knew where it was going and the two characters just got worse and worse, there was literally no one to "root" for. The author did such a good job of describing how terrible each character was that I just stopped caring what actually happened. I was almost hoping for an ending where they just killed each other and instead the author doubled down on crazy.

Also, neither character had a single redeeming quality. How do you write a book like that? Was it suspenseful? Sure. Was it twisted? Absolutely. Was it plausible with all the crazy evidence omissions you talked about? NO. Harry Potter is more plausible than this story.

Yeah, you really don't walk away liking any of them. So you noticed those holes as well? Any others?