The horrible events at the offices of Charlie Hebdo magazine in Paris yesterday sicken me. I could've written about this yesterday, but I wanted to allow myself a little time to process just what happened.

It's hard to imagine that you don't know what occurred, but, just in case, terrorists dressed in black with faces masked barged into the offices of the satirical news magazine (think somewhat akin to The Onion but with a more political lean as opposed to just straight-up farce) and shot and killed eight magazine staffers and two cops outside the building (12 were killed total; I'm not sure who the other two were). The terrorists were armed with Kalashnikov AK-47 assault rifles, a shotgun, and a rocket propelled grenade launcher (RPG). The terrorists called out the names of their victims as they were shot execution style proving that this was a highly premeditated action. It is reported that the terrorists' actions were to avenge a perceived slight against the prophet Muhammad for political cartoons published by Charlie Hebdo over the years. Stephane "Charb" Charbonnier, the editor of the magazine, was named on an Al Q'aida hit list, for God's sake!

Why the emphasis on the word "terrorist" in the last paragraph? Because that is exactly what they are. They were terrorists in the purest sense of the word. They are not men imbued by the holy word of Muhammad to exact vengeance in his name. They are, in fact, the worst of humanity. Scum.

I don't understand why people think that "killing in the name of" is the right thing to do. How is murder something that any real deity would advocate? Any of them. God. Allah. Buddha. You name the deity. As I'm not a religious scholar, I'm legitimately asking that question of all of you, assuming you have religious knowledge greater than my own.

And it happens in all religions. Don't you dare point your finger at Muslims and broadly generalize that they're all to blame. They. Are. Not. Christians have been doing it for thousands of years. Go study the Crusades, will ya? And not what the Bible says about them. That's like reading a book about the evils of slavery written in 1851 by a plantation owner from Atlanta.

I do have a friend who has studied the Koran extensively. He's Middle Eastern in origin (Iraqi) and was raised in the Muslim faith and practices it to this day. He knows what he is talking about. And he is disgusted by the atrocities committed in the name of Allah or Muhammad. He doesn't understand them. And, as you would expect, he is saddened by the negative hits that his peaceful religion takes as a result of these morons doing what they do as a perceived extension of their flawed beliefs. And I feel bad for my friend who is one of the nicest and most caring people I've ever met.

But I also feel bad for humanity as a whole. We have to live in fear our entire lives. Who knows where this sort of hate crime will occur next? At home? At work? At the gym? On a train or plane? In a restaurant? At the mall? At school? A random drive-by? No one is truly safe anywhere.

Seriously, what the fuck?? I hate to go all cliche on you here, but can't we all just get along? Can't we accept each other for who we are and what we believe, embrace our differences, and move on with our lives? There's no reason to be offended by someone's beliefs. Taking offense is just you saying that what you believe is better than what someone else believes and you are forcing yourself to a heightened position over them as a result. Stephen Fry said it best... 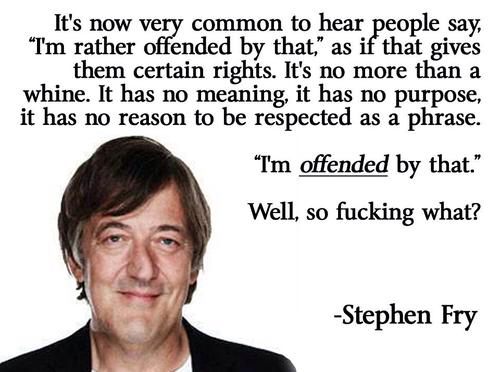 Jan 7
A coworker decided to run a charity drive at work that she calls the "Soup-er Bowl." To take part, you place a can of soup in the box representing a team you want to win in the NFL Playoffs that...
Next Post

Jan 9
A little late this list is, wouldn't you say? By "little late," like, "ridonkulously late." I'm sorry I sat on this one so long, but Katie and I had plans to see additional movies just a few days after the...

Okay. Maybe you and I can talk politics and religion. :-)

Saw that Stephen Fry quote yesterday and I couldn't agree more. Also love the fact that Charlie Hebdo is now going to publish a million copies of the next issue instead of 60,000.

I like the statement the publication count makes. And it'll sell. I wish I could buy a copy here. Right now I'm just looking for a cool Je Suis Charlie shirt.

More wars have been fought in the name of religion than for any other reason. It's part of what turns me off about organized religion. It's so utterly STUPID!!

Bravo. This was so well written. I can't fathom the ability of anyone that is that much out of wack or out of reality to take other's lives in the name of a belief or religion. I have to applaud the French for tracking all but one involved so quickly. While hostage lives were lost in the process, this swift justice is at least some small amount of positive that those that committed these acts are no more.

Just sad that there are still so many more outgoing are we don't even know about.