A coworker decided to run a charity drive at work that she calls the "Soup-er Bowl." To take part, you place a can of soup in the box representing a team you want to win in the NFL Playoffs that week. Then you do the same the next week and then again for the Super Bowl. Oh, and if you tell her that the Green Bay Packers are your favorite team, she will match your donation (she loves the Pack).

Looking at the eight teams that remain -- Ravens vs. Patriots, Cowboys vs. Packers, Panthers vs. Seahawks, and Broncos vs. Colts -- I realized something... I really don't give much of a damn about any of them. My favorite team, the Chicago Bears, never stood a chance of even being worthy of fantasizing about playoff time this season. And my second favorite team, the Pittsburgh Steelers, got bumped last weekend by the Ravens in the first round.

So how does a guy who wouldn't mind participating in a charity drive pick a single team he's going to support from a field of teams he doesn't care about? It's very scientific, actually. See below.

Ravens vs. Patriots
The Ravens beat the Steelers, so screw 'em. And the Patriots suck. Screw 'em both.

Cowboys vs. Packers
The Cowboys are not America's Team and since I read that they gave themselves that name instead of having it bestowed upon them by fans or sportswriters, screw 'em. The Packers? Meh. Whatevs.

Panthers vs. Seahawks
They play football in the Carolinas? Who knew? And the Seahawks won last year. I don't like teams repeating in the Super Bowl. Otherwise I really don't have anything against Seattle. I'd pick them if they weren't the incumbent.

Broncos vs. Colts
The Broncos were an amazing team to watch last year under Peyton Manning. And then he completely folded giving us one of the more lopsided Super Bowl games in many many years. So that was boring. And the commercials sucked so that was boring, too. Screw 'em.

Then there's the Colts. I should hate them since they beat my Bears in the Super Bowl a few years back, but they're not the same team at all. In fact, the QB that beat up my Bears is in Denver. And I already said screw it to him. Andrew Luck seems like a pretty cool kid. Oh, and the team gave me one of my favorite episodes of the TV show Parks & Recreation ever -- "Two Parties." If you haven't seen that episode, do check it out. Great one.

I told you it was scientific.

Jan 6
This story about a Microsoft applicant came across the wire on LinkedIn on Christmas Day. While I agree that it is inspirational, as the poster intended, the skeptic's alarm bells were ringing like a five-alarm jobber in my head. The...
Next Post

Jan 8
The horrible events at the offices of Charlie Hebdo magazine in Paris yesterday sicken me. I could've written about this yesterday, but I wanted to allow myself a little time to process just what happened. It's hard to imagine that... 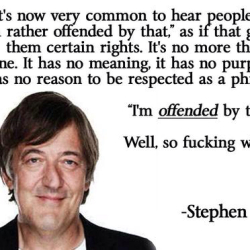 Fun fact, this year's Superbowl is being held within walking distance of my house. We're in a drawing to get a pair of tickets (78 pairs total). If we win, sell 'em or go?

That's a tough one. It's a once in a lifetime experience but that could be some good money if you sell them. I'm torn. Which way are you leaning right now?