No, I don't mean of the "Pop" variety. For months I'd been hearing about this Miami hip-hop artist named Iggy Azalea and how cool she was if you were totally into 90s-style hip hop. Since I do dig that era, I kept her in mind, but never pursued actually getting her album Reclassified until the other day when I saw it was available for free in Hoopla.

Why not, right? If I don't like it, I just "return" it to the "lending library."

A problem has arisen, though. I'd rather not return it. Ever. I mean, I really like the album, but I only have it for another five days at which time I have to decide if I'm going to just return it, check it out for another seven days using one of my remaining eight checkouts for the month, or go out and buy it.

A quick warning, do not listen to the first two tracks, "We In This Bitch" and "Work" around small children. In it, Azalea tosses about the word "bitch" with a frequency and aplomb that can be matched only by Al Pacino's use of "fuck." It's awe inspiring, but you've been warned. Not that there isn't a lot of lyricism that would make Tipper Gore's head explode throughout the album, but those are the two most noticeable instances.

Listening to Reclassified takes you back to the heady days of Salt-N-Pepa when hip hop received an injection of feminine snarl and sass and lip curling. Man I miss those days.

As it turns out, Reclassified is actually a reissue of sorts of her debut album The New Classic that came out about seven months prior to this. "Of sorts" because a few tracks were dropped and six new ones added.

A lot of Azalea's focus is on the life she now leads and the privelege it brings with it now that she's famous. She also likes to spend a little time getting in jabs at people who have hated on her. And while I'm sure some might think it gets old, it hasn't worn thin with me yet. I really need to follow her on Twitter.

It's funny because I cannot really explain why I like this album. It just speaks to me in a way that a lot of hip hop does not anymore. Great attitude and edginess without getting too horribly self assured or pompous. Great beats. And fantastic guest spots from Charli XCX ("Fancy," the one track I knew before hearing this album), Ellie Goulding ("Heavy Crown"), and Jennifer Hudson ("Trouble"). I'm not a huge hip hop fan. I try, but it rarely catches my attention. But all the tracks on here are highly listenable. On repeat, in fact. 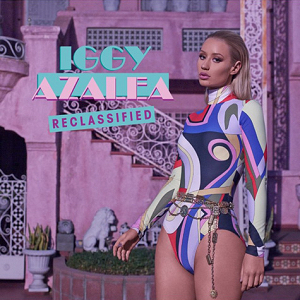 Jan 12
Boy, did Nate have a heckuva night. And Katie and I got dragged along for the ride. As with any kid his age (or any age, for that matter), he did not want to go to bed. Not one iota....
Next Post

Jan 14
For the last month, Katie and I had been taking advantage of a free trial membership to Amazon Prime. Most people know Amazon Prime as the service that allows Amazon shoppers to make purchases and have them delivered within two...

Hmmm... this was one artist that I passed on seeing at Austin City Limits. And her New Year's Eve performance wasn't very enticing to me. I do, however, like that Charli XCX. I might actually give this a listen, just to see what it's all about.

The one my wife likes is Meghan Trainor. And I was quite impressed with her New Year's Eve performance.

So no hate for Iggy from me. Just not all that into what I've heard so far.

I shall check this album out! I really like Fancy and her collaboration on other artists's songs!

PS Haven't been over to see the new site design yet - looks good!

Let me know what you think. And thanks on the design. Spartan. Minimalist. Me likey.