[Author's notes: This story is not a reflection of my feelings having seen Disney on Ice: Frozen. We had a good time even if Nathan was a little antsy. it was a well-done show. Thanks for the tickets, bro. Also, I'm sorry the photo is so blurry. I'm still not comfortable taking shots of people who have zero expectation of having their photo taken. I'll get better. ] 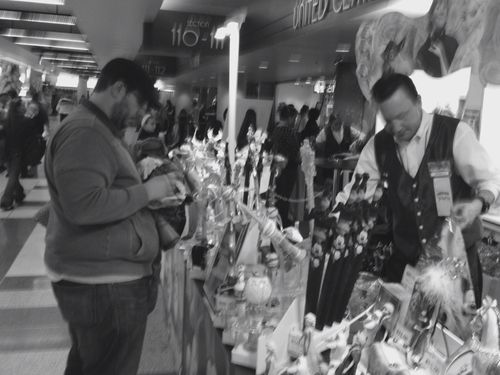 This is mindblowingly ridiculous!

The first indignity came with having to spend $65 per person for tickets. At five people, that's $325.

Popcorn is $12 for a large bag that comes inside a collectible vinyl Disney bag, so two of those to feed us all comes in at $24. Never mind drinks at $7 each. There was no way I was buying a souvenir cup. We spilled one on the way back to the seats. Do you think they were sympathetic to that? Even with the word of a security guy who saw it all happen? Nope. Had to buy another.

Then there are the souvenirs spinning and whirling and making loud annoying sounds that make humans my age cringe, but apparently have some sort of zombifying effect on anyone under the age of seven. Their eyes lock on while their bodies lumber ever closer until they are stuck in a sort of tractor beam an escape from which is only facilitated by buying a $30 princess wand or pirate sword (there aren't even any pirates in this damn show) or a $40 stuffed snowman. Fifty feet further down the concourse, you are assaulted again by another booth selling the exact same crap. And another fifty feet and another fifty feet and...

Where were the mommy and daddy booths? Why could I not get a beer? I've been here for any number of sporting events and concerts and there's always alcohol, even with kids around. Don't tell me I can't have a little liquid courage to get me through yet another refrain of "Do You Want To Build A Snowman?"

F$&k you, Walt Disney! That's all I've got to say. For creating this empire that drains already cash-strapped parents of their hard-earned money to buy something that is either going to break on the way home, be discarded due to lack of interest in a few short weeks, or be so loved that it will be destroyed and then need to be replaced at a premium cost.

I can't be the only person thinking this.

Feb 7
Katie has to work a very rare weekend day tomorrow. I will, as a result, be home with Nathan. This, of course, means I've got all sorts of ideas floating around in my head for what I would like to...
Next Post

Feb 9
It's always kinda fun to look back on a list of intended goals and correlate those to how well it all panned out... if you're a sadistic idiot! No! It's not fun at all! It's depressing. Alas. Shall we see...

Oh, just wait; this is just the beginning. Ringling Brothers, hockey, baseball, basketball, football games - everyone has their hand out, and you feel like a jerk when you say no. Suggestion: bring grandparents - we never say no, lol. We expect to pay $100 per event to see out grandkids smile. Not that it's right, but it's what we do.

I will keep that in mind. Do remember, though, this is not my story. Just my take on what the guy in the photo I'd thinking.

Disney is totally a money suck. But I had loads of fun when I went as a kid! :D

It's impossible to not have fun.

My favorite part is the no beer and alcohol and needing liquid courage. Great story.

Thank you. Much appreciated.