I hear this every time I go for a walk around a nearby park in the winter. The park district floods a couple low lying fields and allows them to freeze over in the winter rendering dead grass into an ice rink. Then they polish to a high sheen and let the citizens and their skates go wild.

The rinks are used more by hockey players than by those out for a casual turn on the ice. Maybe that's why two thirds of the space is blocked off with boards to act as shielding from the small flying patties made of high density rubber. I'm sure the overabundance of hockey area is because, to weather this cold, you have to be a bit more insane than the normal person. A bit more on edge, as it were. Figureskaters are likely flocking to indoor rinks right now.

I've always respected that about hockey players. The daring. The guts. The dedication. Regardless of conditions. These are some of the reasons I've always preferred hockey to any of the other competitive sports. Not to play, mind you. Just to watch. I've learned over the years that I neither have the low center of gravity, coordination level, nor sheer lack of regard for personal safety required to play hockey. But to those who do, God bless you.

And I flinch every time the puck goes CRACK into the boards as though I were the intended target. Funny that self-preservation instinct, isn't it?

Feb 14
Happy Valentine's Day from Nathan! And Katie and Kevin, as well! Since this is a day full of red, I thought I might tack onto it my review of the new Red Velvet OREO Cookies. All I can say is... 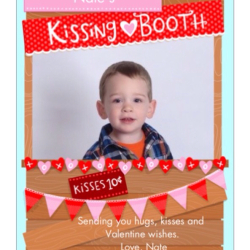 Feb 16
Dear Mommy, Thank you for being the best mama I could ever hope for. I love being around you and cuddling and playing and reading and everything else we do. Happy birthday, Mama! Love, Nathan (and happy birthday from Kevin,...